Colorado’s Gore Range harbors a slew of rugged alpine summits over 13,000-ft and many more summits over 12,000-ft. The Gore’s are more of a range consisting of ridges, rather than separated peaks. Many of these high and wild ridges actually have unofficial names like Zodiac Spires, Rockinghorse Ridge, Ripsaw Ridge, and the Grand Traverse.

Long approaches combined with access issues seem to be a redeeming quality for those that long for climbing solitude. Climbers that are not interested in long approaches and heavy vertical might want to look elsewhere for their adventure. Only 60 miles from Denver, the Gore Range as a whole is relatively inaccessible due to the lack of mining roads that typically criss-cross other Colorado mountain ranges. The beautiful Eagles Nest Wilderness contains almost all of this linear range and the main spine is the border between the White River (west) and Arapahoe National Forests (east). With 50 peaks over 12,000-ft, none attain the magic 14,000-ft mark, which accounts for some of this ranges obscurity. Overall, the west side of the Gore Range is more accessible than the east. If approaching from the east, expect long, tedious bushwhacking adventures with difficult route finding.

Officially named peaks in the Gore Range are hard to come by, nothing seems named on the official USGS maps. Trying to discern actual summits has challenged all of us at some point. Thankfully we have the CMC to make sense of all of that rugged terrain. In 1932, CMC members Carl Erickson and Edmund Cooper used letters to assign summits in the obscure Black Creek Basin and the CMC subsequently tended and expanded the system (Jacobs & Ormes- Guide to Colorado Mountains.) The lettering system for naming peaks has frustrated many casual visitors over the years, however Gore Range enthusiasts seem to embrace the system. It won’t be going away anytime soon.

If you choose to spend time climbing the Gores, you should own updated U.S. Geological survey topography maps and brush up on your compass skills. Precise planning and execution are of paramount importance when selecting routes in this range. With solid route finding, many of these quiet summits can be climbed without a rope. Major faces and long jagged ridges provide unlimited technical climbing opportunities as well. An ice axe is highly recommended on any early season climbs. 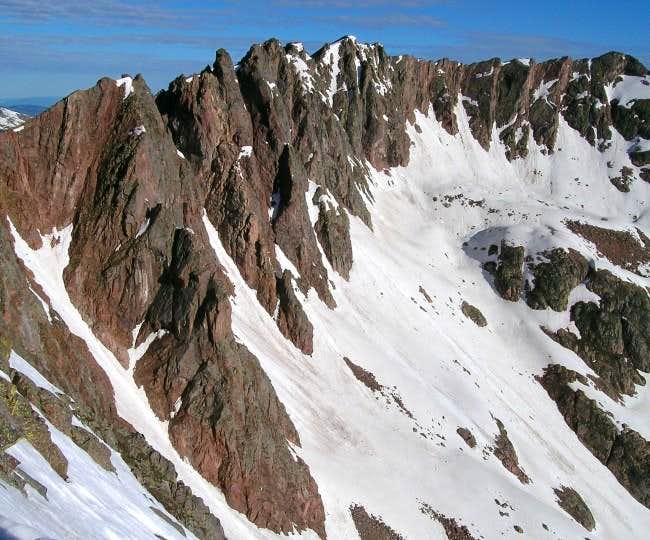 When your eyes first see it, it’s hard to forget. Most see it by accident while driving east through Vail, Colorado prompting Wow, that’s beautiful! Others first see it when they receive a postcard from a friend who’s spending time relaxing in Vail; Wow, that Vail sure is beautiful! For most, it’s just another pretty postcard; for a few photographers and mountaineers, its pure inspiration. I’m referring to the shapely, rugged skyline that towers to the northwest of that ski resort, the sole property of the Gore Range, known as the Grand Traverse.

For me, the Grand Traverse only typifies the consistent and flowing beauty of the Gore Range. From any Gore summit the view is constant and flowing: consistent highpoints, connected by flowing ridges. This is what you can expect while spending time in the Gores. You can also expect, long approaches, heavy vertical gain and unreliable routes. Oh yea, did I mention anything about the ravenous, hordes of blood-sucking mosquitoes? Bring DEET, or you will be breakfast, lunch and dinner.

Because of rugged nature of the Gores, expect your mountain to be surrounded by numerous high basins and drainages. According to plan Grand Traverse Peak is flanked by three major drainages including the high Deluge Lake Basin, the lush Bighorn Creek Basin and the huge North Rock Creek Basin. Grand Traverse Peak looks like a different mountain from the Bighorn Creek Drainage, steep and rugged. From Deluge Lake and other area summits, the mountain is easy to identify, it resembles a moderate sloped pyramid.

Grand Traverse Peak is easy to ascend via a number of class 2 routes. The huge southeast face makes for a nice snow climb in May and early June. This slope gets southern exposure and melts out fast, so I recommend the month of May for a nice snow climb. For those not into snow, try the easy class 2 West Ridge Route. Although not technically difficult, Grand Traverse Peak still requires a steep 4,311-ft in 4.5 miles.

From Denver, take I-70 west, past the Eisenhower Tunnel and on to the popular ski towns of Dillon and Silverthorne. Continue past Copper Mountain Ski Resort and on to Vail Pass. From Vail Pass, descend down to the city of Vail, Colorado and take exit 180, your first Vail exit on the right. Turn left and go under I-70 and take an immediate left (southeast) onto a feeder road. Take this road past numerous condominiums 2.10 mile southeast where it will bend to the north and go back under I-70. From here it is only .19 mile to the Deluge Lake Trailhead; there is plenty of parking. This is also the Gore Creek Trailhead, another great trail that provides access to many scintillating hikes and climbs.

Author: Scott Patterson
Date: Aug 28, 2005 6:40 PM
Kane, I know you don't mention the campground on the page, but this may be worth mentioning somewhere:

The campground that is shown on the maps that is not far from the trailhead is closed to tent camping because of bear problems. Only "hard walled" RV's are allowed.

It might be worth mentioning somewhere so someone doesn't show up near the trailhead or Vail late at night looking for a campsite to do the climb the next morning.

Expect snow up in the Deluge Basin until early June.