Peak C from the approach along the Upper Piney River trail. Photo by Kiefer Thomas


Towering nearly 1000' above Kneeknocker Pass at the northern end of the Ripsaw Ridge in the heart of Colorado's Gore Range lies Peak C. This distinct peak is easily recognizable from neighboring summits, the local ski areas and the northern Sawatch Mountains, yet its unassuming name and elevation of "only" 13,220' keep it off many climbers radars. To me, and to those who have climbed it, this is a mistake.

To those who have seen it, especially up close, it is an instant draw, you simply must climb it. The striking feature on its southwestern face is a finger of snow leading to a narrow col between the main summit on the left, and "C Prime" - a small rugged tower - to the right. The peak almost resembles a mitten covered hand with C Prime representing the thumb.

For those who journey deeper into the Eagles Nest Wilderness, a whole new and even wilder view of Peak C awaits. Particularly the way the peak dominates from Kneeknocker Pass. A climb of Mount Powell offers perhaps the most dramatic and inspiring view of this peak, and the 5th class northwest ridge.

Peak C from near Kneeknocker Pass on Mt Powell. Photo by John Kirk


It is the 462nd highest peak in Colorado, but within the Gore Range, it is the 7th highest. It is in the Vail East quadrangle and stands with 520' of prominence from its "parent", Peak G, and nearly 1000' of vertical relief from Kneeknocker Pass. The Ripsaw Ridge marks the dividing line between Eagle and Summit counties, and this peak's summit lies in both counties. It is a bit of a locals "rite of passage" so to speak, many mountain climbers in the area put this peak among their favorites, and on their "must climb" list. There is even a ski run at Beaver Creek named "C Prime" located in the Rose Bowl, as well as one called "Ripsaw".

Most of the peaks in the Gore Range are officially "unnamed", and Peak C is no exception. You will not find Peak C listed on any USGS or National Geographic Maps. The "alphabet peaks" in the Gore technically start at Eagles Nest, which is Peak A. They roughly follow the ridge crest until Peak H, then reach out on several spur ridges until terminating at Peak Z. Several other peaks to the south of Peak Z then have other unofficial names. Navigating which peak is which in the Gore Range can be tricky business on a map with no names, and some without even spot elevations. That is part of the allure of this range for those who climb here. To that effect, and following in Kane's pledge on his Gore Range pages, I will not provide a map. If anyone would like a Topo map of this area, please send me a PM and I can email one to you.

The primary access point for Peak C and the surrounding summits is through the town of Vail. Exit I-70 at Exit 176 (Vail) and head west on the North Frontage Road for 1 mile to Red Sandstone Road, turn right and follow the paved road for 3/4 miles. The paved road switches to the right and a graded dirt/gravel road (FS 700) continues on from this point (signed). If muddy, 4WD is recommended, but the road is usually fine for 2WD vehicles. Follow the road for 11 miles to the parking area just before the entrance to Piney River Ranch. The ranch is private, however, there is a public trail that starts across the road and skirts the ranch to provide access to Eagles Nest Wilderness and Peak C. There is some dispersed camping along the road. In winter the road is closed about 1/2 mile up the dirt road, typically opening around Memorial Day.

Alternate access from the Summit County side is rough and remote with limited trail access and a lot of rough bushwhacking. To start this journey, the Brush Creek Trailhead would work best, its a tough single lane 4WD jeep road, directions are described here on Kane's Peak N page.

Peak C offers several challenging routes that include 3rd and 4th class scrambling, steep snow, and technical rock on an airy ridge. The normal approach is via the unmarked Kneeknocker Pass Trail. This trail is really a spur of the Upper Piney River Trail that also provides access to several other peaks in the area, including Mount Powell. The initial approach on the upper Piney River Trail is fairly straight forward on a well maintained trail that generally stays about 200 feet or so above the river once past the ranch. You will follow it for about 3 miles, the last mile of which gets a little steeper. The trail split is usually marked with a small cairn, and is before you cross a creek that comes out of the basin you are trying to ascend to.

This trail can be tough to follow, especially in a lower meadow, the trick is to know that after the meadow the trail parallel's the steep cascading creek on the left (west) side. I think I have lost it every time I have passed through that meadow, but have always picked it back up again as it goes back in the woods near the creek. Its easier to follow beyond this point, but if you lose it, just stay close to the creek and you will find your way to the upper basin.

From here there are two "standard routes", depending on the season. If there is snow, the best route is the Southwest Couloir, but when dry the West Ridge is a more sensible option, dry couloirs are usually a misery of lose rock and ball bearing scree. An ice axe and crampons will come in handy for the couloir, and an ice axe should still be carried for the west ridge route as the access gully that reaches the southwest face may be snow choked into July.

There are also some 5th class routes on the peak's north aspects, recently posted photos by SP member Monster5 are extremely helpful, thanks for posting!

Some Images from the two "standard routes" and a shot of the tech routes on the north side, click to enlarge: 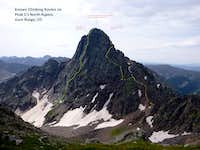 There are several small dispersed camp sites along the Red Sandstone Road and some of the side roads off of it. A few of these have recently been closed for restoration, please observe all closures. There is also about a one mile stretch of the road that goes through private property, please do not camp in that area.

The peak lies within Eagles Nest Wilderness and backcountry camping opportunities are plentiful, just be sure to follow Leave No Trace and the Wilderness Area regulations for camping off trail, away from lakes and streams, and not within 1/4 mile of treeline. Campfires are allowed, but subject to Wilderness regulations and possible restriction during high fire danger. Also please refrain from camping until you are past the Piney River Ranch and within the wilderness boundary. You probably don't want to camp that close to the ranch anyway.

Peak C and the Ripsaw, from the Corners. Photo by Floyd

Peak C resides in Eagles Nest Wilderness of the White River National Forest, and is subject to the regulations of that area including no motorized or mechanized travel, leash regulations for dogs, and restrictions on camping locations, group size, feed for pack animals, and storage of materials. Read more about the requirements at the US Forest Service home page here.

The area around Piney Lake is privately owned by Piney River Ranch. A public parking area lies just below the ranch entrance, and a public trail goes around the ranch. Please refrain from hiking through the ranch unless you are a guest there.

Peak C and the Ripsaw, from Piney Lake. Photo by mtelbertman

When to Climb: Typically the road to Piney Lake is closed to vehicles from early November to around Memorial Day, you would need a snowmobile or a bike during that time to get to the trailhead at the ranch, but would have to leave them there as the peak is in a Wilderness area. The snow climb of the Southwest Couloir is delightful, and I recommend June as the best time to climb. Climb early as the route gets sun earlier in the day with its southwest orientation. For a scramble up the West Ridge or the technical Northwest Ridge I would recommend late September, the approach trail has some spectacular fall color!

Wildlife: Piney River often has moose, I have seen them four times in my trips up that trail! Twice along the river, and almost walked into a third one in the dark from less than 10' away right by the ranch. We were lucky it wasn't as spooked by us as we were by it, maybe it saw our headlamps coming. The fourth encounter was one standing in the trail and in no hurry to move, we ended up bushwhacking around him trying to stay out of his sight. Frequently turn your gaze to the river valley while along the approach and you may be lucky enough to catch a glimpse, but be careful not to spook one! Also watch for elk and deer on the Red Sandstone Road, I have almost hit one in the dark before.

Weather and Avalanche Forecasting: Below are some links to help you plan you trip.