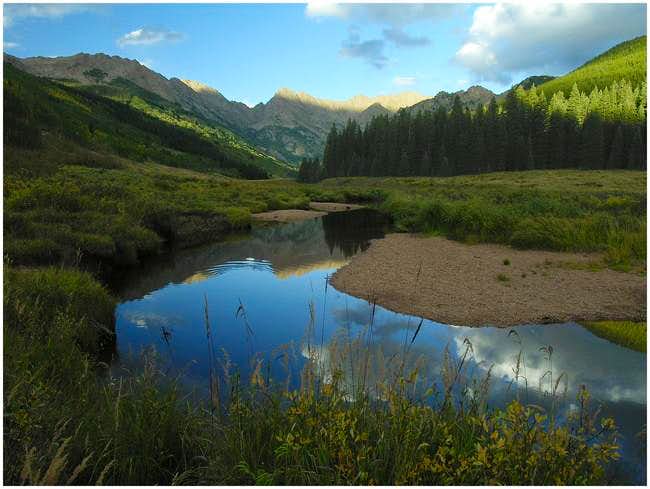 Colorado's Gore Range
”In my opinion, the two most rugged mountain ranges in Colorado are the Gore Range northwest of Dillon Reservoir and the Needles Range in the remote San Juan Mountains.” -John Fielder-famous Colorado Landscape photographer.

Only 60 miles from Denver, Colorado the Gore Range as a whole is relatively inaccessible due to the lack of mining roads that normally criss-cross other Colorado mountain ranges. The Gores also have a reputation for a lot of trailhead access red tape, due in large part to private property. Hikers and climbers not interested in long approaches and heavy vertical might want to look elsewhere for their adventure. Overall, the west side of the Gore Range is more accessible than the east. Approaches that start from the east are few because of private property, in return, expect even longer approaches and expect a poor network of trail systems. Precise planning and execution are of paramount importance when selecting routes in this range. Armed with a loaded backpack and good maps, many of these quiet summits can be climbed without a rope. Major faces and long jagged ridges provide unlimited technical climbing opportunities as well. An ice axe is highly recommended on any early season climbs.

Officially named peaks in the Gore Range are hard to come by, only a few of the Gore highpoints have official names. Differentiating the highpoints on a map or while hiking has challenged all of us at some point. Thankfully we have the CMC to make sense of all of that rugged terrain. In 1932, CMC members Carl Erickson and Edmund Cooper used letters to assign summits in the obscure Black Creek Basin and the CMC subsequently tended and expanded the system (Jacobs & Ormes- Guide to Colorado Mountains.) The lettering system for naming peaks has frustrated many casual visitors over the years, however Gore Range enthusiasts, or "Gore-cores" seem to embrace the system.

Ripsaw Ridge personifies exactly what the Gores are all about. The Ripsaw is three miles of rugged ridge, flanked by a continuous 3,000-ft of prominence. That kind of distance, combined with that kind of prominence is tough to find in Colorado. Viewed from the west or the east, the Ripsaw is almost “fortress-like” in appearance. Towering above Upper Piney Valley, and the super remote Black Creek Drainage, the Ripsaw consists of a series of highpoints that average around 13,200-ft.

Just southeast of Kneeknocker Pass, The Ripsaw begins with a doozy of a mountain, the great ”Peak C” (13,220-ft). For certain, Peak C benefits from an unabated view from the tourist and photographer-laden Piney Lake area. It is the deserving “trophy peak” of the Ripsaw Ridge. However, by its standard route, Peak C has trouble living up to the more technical and strenuous routes of its nearby neighbors, “Peak C-Prime” (13,100-ft), “Peak’s D (13,047-ft), E” (13,220-ft), F (13,230-ft) and most certainly ”Peak G” (13,260-ft, which is the Ripsaw’s highpoint and the Gores 4th highest peak. Peak C does make for a nice intro to Ripsaw Ridge and it also makes a great early spring great snow climb. From the stunning Peak G the Ripsaw continues southeast to “Peak H” or Black Benchmark (13,129-ft,) and officially ends at “Peak J” (12,942-ft.) Some argue that the Ripsaw officially ends at “Peak U” or “West Partner Peak (13,041-ft);” that theory makes sense as well.

Peak C protects and harbors another high point just .02 miles southeast called Peak C-Prime. Barely noticeable from Piney Lake and often overlooked, Peak C-Prime views equivalent to a huge gendarme instead of a separate peak. However, ascending C-Prime feels like climbing a stack of perfectly placed chunks of solid granite, all the way to heaven. Thus, C-Prime is “can’t miss” summit. In addition, C-Prime’s airy summit is quite small so hang on to your hat. Also, the wonderful view is also worth mentioning.

About a half mile southeast of C-Prime resides a more distinct peak, Peak D. This cone-shaped peak views well from Piney Lake and especially from the Upper Piney Lake Trail. Discovering Peak D’s summit is easy class 3, but getting to C-Prime is another story.

The stretch of Ripsaw Ridge between Peak D and Peak C is very complicated. The route finding is difficult and often downright meticulous. However, with patience and perseverance, (I don’t say this half-heartedly) the route from Peak D’s summit (with an ascent of C-Prime) to Peak C’s summit goes without any class 5 climbing. Enjoy solid climbing while on the ridge-crest and when off the crest, be prepared for steep slopes ribbed with rubble filled and very steep gullies. Do not attempt this route without a good weather forecast.

Getting There- courtesy of ATTM

Take I-70 west from Denver to the resort town of Vail. I-70 will be stop and go at times between Denver and Silverthorne on a busy weekend. Take Exit 176 and drive North on the service road 1 mile. Take a right turn on Red Sandstone Rd. (County Road 701) and drive 11 miles on a 2x2 road. The first 1/2 mile or so is paved. The first 5 miles isn't too bad except for the washboard if they haven't grated the road in a while. The next 5 miles is passable for any car but is very rough because of NUMEROUS potholes. During the busy tourist season, you may get behind slow moving vehicles making their way to Piney Creek Ranch. Get an early start to avoid the crowded road.