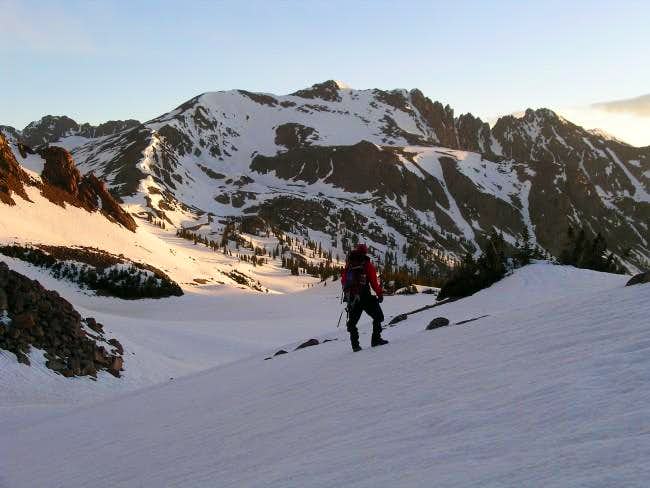 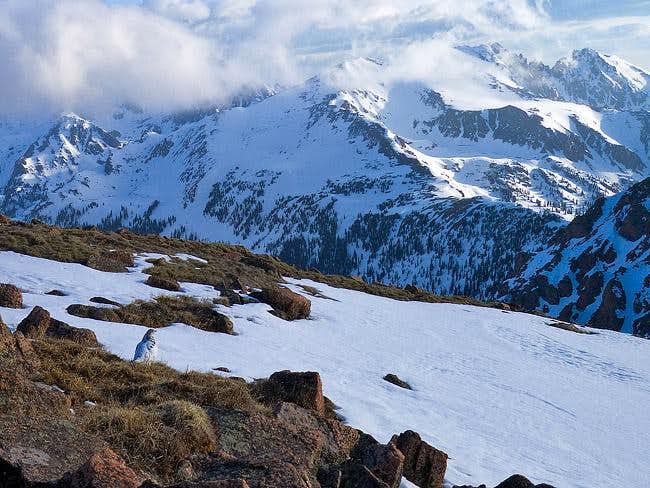 Anchoring the southern tip of the Gore Range proper is Red Peak at 13,189-ft. Red Peak is king of all visible Gore mountains from the Silverthorne, Colorado. Decending the Eisenhower Tunnel, the visible granite dome of Buffalo Mountain dominates the view west of Silverthorne. If you love beautiful, rugged mountains; you will foam at the mouth when your eyes first set on the jagged, tooth-like rock pinnacles that sore over the rounded mass of Buffalo Mountain. Those pinnacles belong to Red Peak.

Red Peak is a very large mountain. Separated by three major drainages, (South Willow Creek, Gore Creek, North Willow Creek) Red Peak's summit commands breathtaking views of nearby East Thorn, Willow Peak, Snow Peak, Hail Peak and the Zodiac Spires. Red Peak has two distinct summits. The west summit is the true summit and can be attained by a steep class 2+ hike up the south ridge. This ridge becomes a class 3 outing in May and early June, depending on snow pack conditions. The unfrequented east summit is the highpoint on the other side of the gnarled ridge.

Locating the Meadow Creek TH is easy. From Denver, take I-70 west to the mountain towns of Dillon and Silverthorne. After passing the exit for Dillon look sharp for the exit for Frisco and Breckenridge, exit 203. After exiting 203 you will come to a roundabout. Travel halfway around the roundabout and take a gravel road that heads west. Follow this gravel road about a quarter mile to the Meadow Creek Trailhead; this is also the trailhead for an easy hike of Lily Lake. There is ample parking for early hikers. Because of the proximity of this trailhead to major mountain resort towns, these trails do see its share of traffic. I would consider an 8-mile RT hike to Eccles Pass to be the main attraction for most day hikers.

I discovered the Meadow Creek approach to Red Peak to be the easiest way to climb the South Ridge Route based on extensive topo research. Jacobs and Ormes “Colorado Mountains” suggests the standard route on Red Peak to start at Gore Range Trail at South Willow Creek or the Gore Range Trail at Gore Creek Campground off I-70, each approach is 6 miles. The Meadow Creek approach is 5.5 miles and gets southern sun exposure for faster snowmelt.

Click image to enlarge for better detail or to vote. 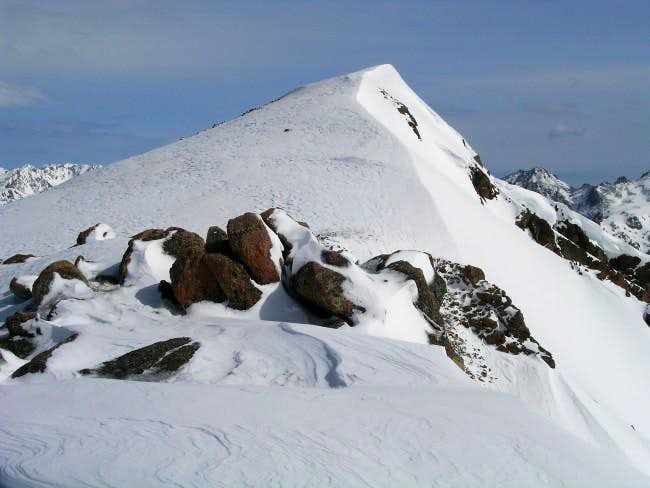 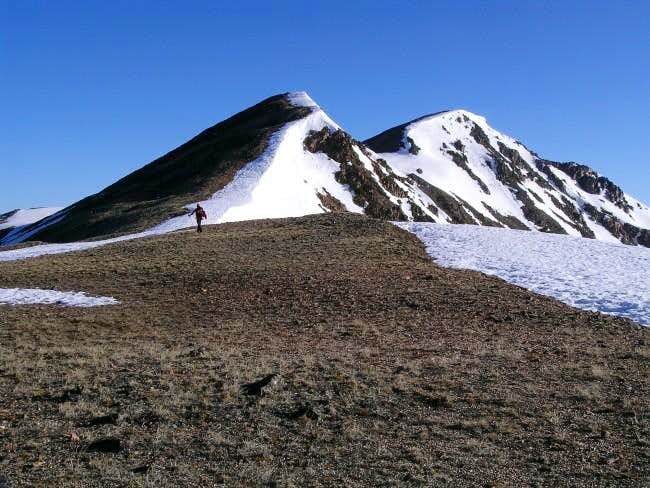 Point 12,736-ft (above left) and Uneva Peak-12,522-ft (above right) bookend a long, gentle ridge that extends 6 miles south from the Gore Creek Campground and I-70 to Copper Mountain Ski Resort. Uneva Peak is accessed from the parking area at Vail Pass and Point 12,736 is easily accessible from the runaway truck ramp about 4.5 miles west of Vail Pass.

This entire ridge is above tree line and any number of spots along this ridge will offer a perfect place to become anointed with the Gore Range. If your interested in the Gores and want to get an excellent view, showing many of the more prominent peaks, then I would highly recommend both of these points. Personally, Point 12,736 is my favorite of the two because it’s in closer proximity to the Willow Massif and the rest of the Gore Range proper.

When I first discovered Uneva Peak and the long ridge running west to Point 12,736, I realized what a great winter hiking option this could be because of the minimal avalanche danger. I would research the area before heading out, but Point 12,736 seems the best option of the two for a very safe winter accent. In the early days of spring, attaining both summits will require some glade hiking, and much more tundra hiking. This wide open hiking takes place on expansive, high alpine, moderate slopes. Also, these west-facing slopes get plenty of sun hit in March and April and can be void of snow as early as May. Conditions may vary season to season.

From I-70 and Vail Pass at 10,600-ft, hike mostly north and a little east over a treed hill into Corral Creek Meadow at 10,767-ft. Cross Corral Creek and pick spot to ascend the obvious, moderate slope to the east. I would recommend trying to attain the saddle in between Uneva Peak and Point 12,363-ft. Select your route based on snow conditions for in summer any route will work here.

After 1.67 mile and 1554-ft of hiking, you will come to the low point or saddle in between Uneva Peak and Point 12,373-ft. From here it is an easy .67 mile hike on a faint trail over a false summit and on to Uneva’s true summit.

From Vail Pass, descend .5 miles west to the runaway truck ramp at 9,777-ft. Exit here and follow the easy dirt road that runs along the right side of the gravel truck ramp. At the end of a ramp is a flat, paved area that CDOT uses to store sand for Vail Pass in the winter. Locate the paved road from here and drive it another quarter mile to some obvious parking on the right. Later, when leaving, you must go back the same way you came in for the road is not open for thru traffic.

If you study a topo map of your planned route, this route description may become a moot point. The route is fairly steep but is easy. From the parking area at 9,532-ft, ascend the grassy slope directly northwest. This grassy slope will quickly become a treed slope. At about 10,400-ft, begin to veer to the right (east) to bypass some steeper, and more rugged areas. The entire slope here is a bit convoluted so the idea is to hike up along ridge crests of the abundant small drainages. At 10,900-ft the slope will relent as you come to an open area.

From 10,900-ft, continue east up through more trees and soon you will hit tree line at 10,520-ft. From here it is an open tundra hike 1 mile to the summit, which should be obvious and directly east.

Conditions vary, depending on the time of year. We climbed Red Peak in late May. We encountered snow at about 11,000-ft. Because of the residual snow pack in early spring you must climb Red Peak in the early a.m. hours (between 5:00 & 11:00 a.m.-meaning you must start and summit and back to snow less terrain by 11:00 a.m.) to take advantage of the overnight freezing for fast snow travel. Five miles of this RT hike in late May and early June is on snow.

Stan Wagon has done a bunch of stuff in the Gore Range. On this page, he calls the ridge between Red's summits "Red Diamond Ridge" (5.6) and mentions that he's done it 3 times.