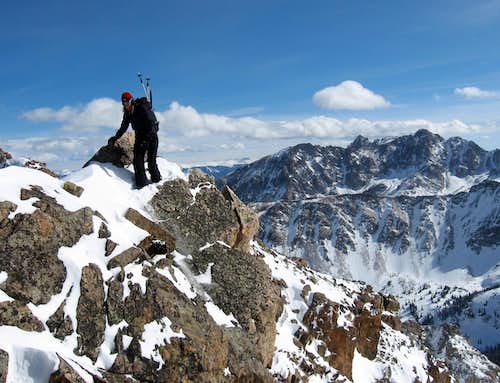 Dedicated to the memory of DharmaBum1984.
"I lingered on the summit a minute longer, in awe of the mountains around us. Deep winter in the Gore Range is a place of savage, unrelenting beauty. Jagged rock, wild snow, and death-trap avalanche chutes meet your eye everywhere you look. Though it was my first time on Keller's summit, I felt like was coming back to a place I already knew. Nowhere feels more like home to me than the summit of a wild, remote peak. Although civilization was only a half day's walk out, our position felt far more removed than that. The aesthetic appeal of such a place, of course, belies a much colder, more indifferent demeanor as well, and our time up there was brief and borrowed. We began the descent." -Jesse Peterson aka DharmaBum1984

Colorado’s spectacular but barely known Gore Range is host to many alpine summits over 13,000-ft and many more summits over 12,000-ft. In the relatively short stretch from Gore Pass in the north to Tenmile Creek in the south, the Gore range is densely populated with 50 some mountains over 12,000-ft. The Gores, rather than consisting of large isolated mountains rising from the timber or tundra, consist instead of dramatic serrated ridges, with the summits being ridge junctions or highpoints. These dramatic ridges are riddled with gnarled, tooth-like spires that have mesmerized many world-class climbers. Many of these high and wild ridges actually have names like The Zodiac Spires, Ripsaw Ridge, and The Grand Traverse.

Geologically the Gore Range is a fault-block mountain range. Similar to the Sangre de Cristos of Colorado and the Tetons of Wyoming in that these ranges are bounded by faults that broke and shifted, thrusting up the mountains while downdropping the valleys. Although the rock is similar to the Idaho Springs Formation of the Front Range, the rugged Gore's contrasting orogenesis makes these mountains look quite different from the glaciated folded anticline that makes up the Front Range. Glaciers played an extensive role in carving the cirques and spires that abound in the Gores. Many of the drainages are choked by large terminal moraines at their lower reaches and cut by successive headwalls higher up. Many headwalls are graced with gorgeous waterfalls.

The Gore Range is almost completely encompassed by the Eagles Nest Wilderness. This 133,325 acre Wilderness Area was established in 1976. It is popular (especially the Vail side) but wilderness protection has granted a lasting pristine quality that is palpable. Despite the network of access trails, many drainages (the upper reaches in particular) remain trail-less. Wilderness regulations do apply; please follow them as this area is a real treasure.

A result of the Gore Range's obscurity is that few of the summits are officially named. The Colorado Mountain Club and enterprising climbers have often bestowed their own names. These unofficial designations often are the "alphabet" designations of the early CMC trips (relics of the 1930's) or the more inspired names that came later on (The Spider, Mount Solitude, etc). A list of these names and their elevations can be found at Gerry and Jennifer Roach's wonderful website. The process of educating one's self about these mountains is quite rewarding. Hand label your maps.

Those of us that are determined to spend some time climbing the Gores should own updated U.S. Geological survey topography maps and brush up on their compass skills. Precise planning and execution are of paramount importance when selecting routes in this range. With solid route finding, many of these quiet summits can be climbed without a rope. Major faces and long jagged ridges provide unlimited technical climbing opportunities as well. An ice axe is highly recommended on any early season climbs.

Please do your own research and homework for the Gores because this mountain range lacks any current guidebook exposure. After developing strong map reading skills, go and discover for yourself the Gore Range magic you occasionally hear about.

Text graciously provided by Kane with some elaboration by myself.

The northern Gore Range from the summit of Keller Mountain. 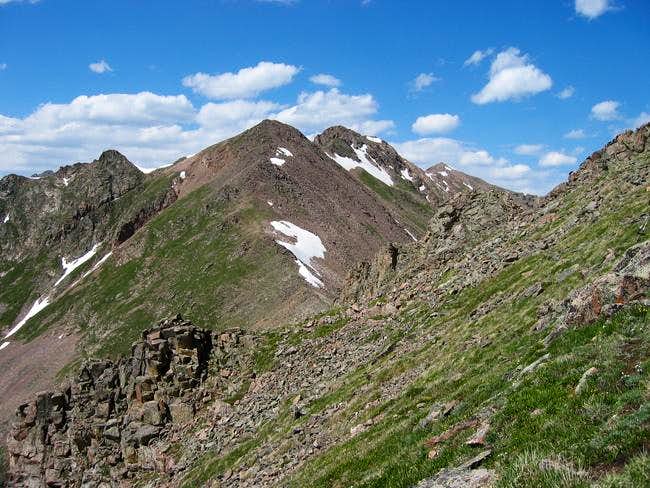 Keller Mountain from the north ridge of North Traverse Peak.

Keller Mountain lies on the eastern margin of the central portion of the mighty Gore Range. Such geography provides Keller Mountain with unparalleled scenery. The views of the surrounding Gores is indeed breathtaking. Keller separates the Rock Creek drainage and the Boulder Creek drainage, two bastions of pristine wilderness. Keller, despite the access provided by a popular trail, feels completely wild.

Keller Mountain's countenance is polymorphous. Viewed from the south it is a rolling ridgeline. Viewed from the west it is the highpoint of a easy-looking ridge. Yet viewed from the north it produces a fearsome sight with a rugged north face. Keller is large and complex. In spite of its mellow appearance from many vantages it is a well-guarded mountain requiring either a long bushwack, or a testy scramble to attain its summit.

The main routes on Keller are either the Class 2+ Southwest Face or the challenging 3rd class East Ridge. The East Ridge is joyous in a windy-treacherous sort of way. Route finding is fun and the terrain almost always presents alternatives. The ridge crest is semi-solid but the traverse below the ridgeline is remarkably loose. Gerry Roach designates Keller Mountain as a classic summit; indeed the pleasantries of this ridge are likely the reason. If you like the Gores you will enjoy Keller. 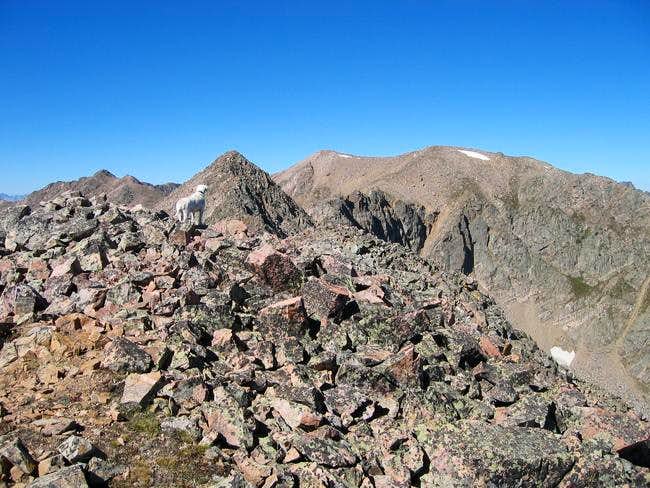 The view of Keller Mountain's summit from the sinuous East Ridge.

East Ridge Route, 9.5 miles, 3rd Class
The East Ridge of Keller Mountain is accessed via the Rock Creek Trail. Follow this expansive trail to the Boss Mine tailings which cover a portion of Keller's lower southeast slopes. After passing under the mine tailings find a small miners trail that switchbacks up, around, and then across the mine tailings. This trail persists as a faint trail then eroded gulley to the ridge crest. Once on the forested ridge go west to timberline where the view opens up and the first false summit along Keller's East Ridge comes into view. Travel across grass then talus to gain the summit of the first false summit.

From this pleasant vantage it is possible to see the rest of the route. This vantage (shown on the first photo on this page) depicts the second false summit, the cataracts on the ridge itself that are the route's crux, and the gentle rolling true summit of Keller Mountain. The route to the second false summit is merely tallus hopping. The second false summit can be bypassed on the south side, but is worthwhile to visit. From the top of the second false summit Keller Mountain looks very close. However the fun has just begun. Descend off of the second false summit. The easiest path goes down a scree gulley towards a minor ridge. After descending 75 feet or so continue back to the ridge crest. This part is easy and grassy. This part quickly gives way to narrow notches and looser rock then what has come before. The easiest path seems to stay high past the notch and then descends a scree gulley to the final slopes. From here a restful walk gains the summit of Keller Mountains. The views are superb. The descent can be accomplished by reversing the ridge route, or persuing an escape off the South East Face. This latter option requires bushwhacking but may allow a way out if the weather threatens. 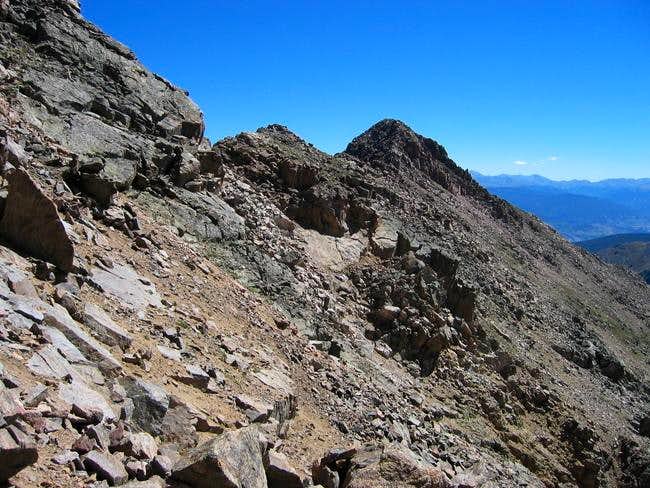 Keller Mountain's East Ridge. This is looking back on the second false summit and crux of the route.

Maps and Directions to Trailhead 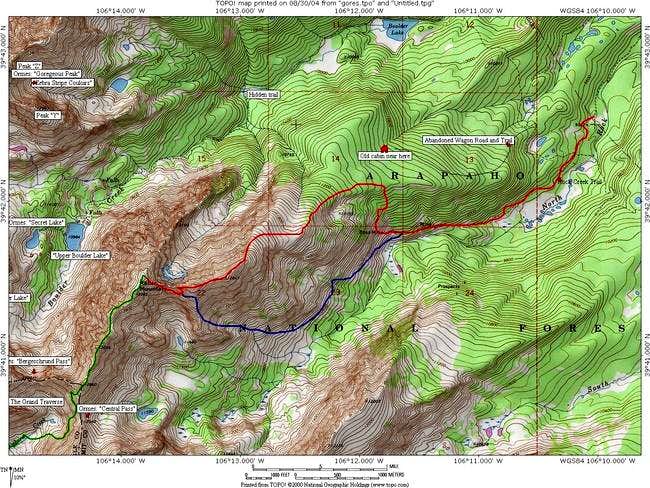 Keller Mountain Topo Map. The red route is the 3rd class East Ridge, the blue is the 2+ Southwest Face, and the green route is the class 2 Bighorn Creek Traverse.

From the I-70-Highway 9 intersection at Silverthorne drove 9 miles north to a sudden left turn onto Rock Creek Road. This road quickly gives way to dirt. After a couple of miles turn left onto another dirt road marked with a sign indicating the way to Rock Creek Trailhead. Follow this road approximately 3 miles to a large signed trailhead with ample parking. This is the Rock Creek Trailhead which gives access to the trails leading to the Boss Mine and upper Rock Creek Basin the later trail quickly becomes primitive and then nonexistent, requiring a bushwhack. The Gore Range Trail can be accessed here giving access to Boulder Creek and Slate Creek drainages.

Car camping is available along the Rock Creek Road, while pleasant (but easily reached) backpacking sites are available in the several meadows to the south of the main trail. Above the Boss Mine a high camp would be possible for those wanting to shorten the adventure.