This page was built with appreciated help from Tomáš Krištofóry and jck. Apart from our personal experience, the pages listed in the External Links section also provided valuable information. 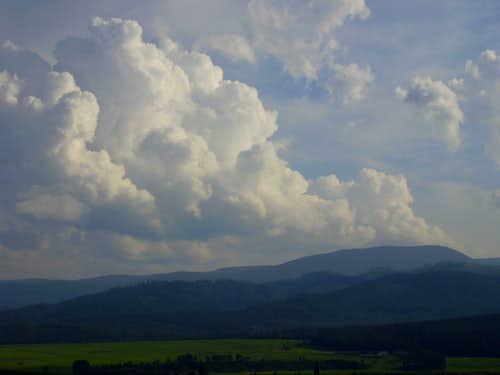 Slovenský raj (Slovak Paradise) is located just east of Low Tatras /Nízke Tatry, Tatry Niżne, Alacsony-Tátra, Niedere Tatra/, in the north-eastern part of Spiš-Gemer Karst /Spišsko-Gemerský Kras , Gömör-Szepesi-karszt/, a few tens of kilometers away from the High Tatras /Vysoké Tatry, Tatry Wysokie, Magas-Tátra, Hohe Tatra/. It is worth a visit on its own, but can also be a great "relaxing" one-day excursion from the Tatras (i.e. if weather is not good up there).

The main attractions of Slovenský Raj are not its peaks (even the highest ones are below 1300 m) but the handful of deep and wild gorges that can be found in a relatively small area. The 150 – 450 m deep gorges were carved by streams into the original limestone and dolomite massif. In most cases they are named after these streams. The area has several beautiful and high waterfalls (vodopád in Slovak), numerous caves and other karst formations. Forest cover of Slovenský Raj is almost complete (about 90%), but there are a few remarkable lookouts.

The area of Slovenský raj can be split into two parts:List of the gorges with marked routes: </tr)Southern partThis region has higher elevations than the Northern part, with several points exceeding 1100 m. Ondrejisko, the highest point of Slovenský Raj (1270 m), is also here, but Havrania skala /Raven Rock, Holló-szikla/ (1153 m, north of Stratená village) is more important as a lookout point. Apart from another canyon (Stratenský kaňon) and one steeper gorge (Zejmarská roklina, with Nálepkov waterfall), further curiosities can be found here:

Routes in the gorges are secured extensively by wooden and metal structures: bridges, step-plates and ladders help advancing people at places where otherwise serious climbing efforts would have to be undertaken. This means that the gorges are available to many people and are very popular holiday destinations, often getting crowded during the summer season.

To avoid traffic jams, start early morning, or visit in springtime.Trails are marked by red, blue, yellow and green colors (stripes by default), as elsewhere in Slovakia. In the gorges they are one-way (up) only! For getting back down, there are alternative routes going more or less in parallel with the gorges, but on much easier terrain. Also, there are trails that connect the endpoints of gorge exits, creating a comprehensive and useful network of routes for exploring the area.

Probably a few routes will be described in more detail later. Until then here is a table that lists some of the possible round-trips from Podlesok camping. This is definitely not a complete set of possibilities, several other combinations are possible. Required times are indicative, you may add or deduct up to about 1:00 (in total time) depending on how much time you spend gazing the waterfalls, how fast you go generally and how fast others go ahead of you (traffic can be slowed down considerably by less experienced hikers at bottlenecks of the trails). Technical sections (canyon and gorge trails) are highlighted with bold. 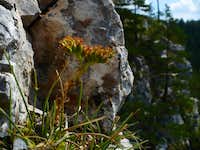 Slovenský raj is a National Park since 1988 (protected area since 1964) with an area of 19 763 ha (13 011 ha of which is strictly protected).The car road called "Kopanecka cesta" through the karst plateau is forbidden from both direction from Hrabušická píla and from Krivjan (to the junction of the main road Pusté pole - Dobsiná, direction Hrabusice. The reason of the closure is the descending of the part of the road into the ground. Rules are as usual: keep on marked trails, no littering, no destruction or disturbance of nature.Entry into the National Park is subject to admission fees, which usually have to be paid at booths by the gorge entrances. For Dobšina ice cave different fees apply.Slovenský raj admission fees(1-day tickets, for 2007)Dobšina ice cave admission fees(for the most up-to-date information check out the page by Slovak Caves Administration, listed in the External Links section)Fires in forests of Slovak paradiseby Tomáš Krištofóry 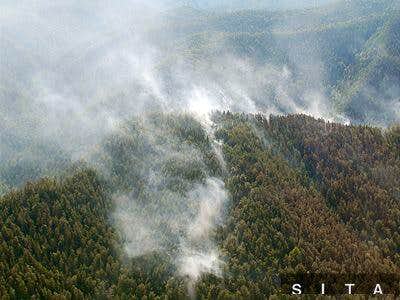 The fire on the edge of carst plateau of Slovak ParadiseLimestone plateau with plenty of gorges is generally a fire trap, especially during droughts. Any precipitation gets first in the surface into caves, abysses and another carst forms. Area has complicated geomorphology and that predicts problematic access for firemen and their equipment.

Thus there is strict denial of using open fire in Slovak paradise NP. However, this law is sometimes broken. For example on 17th july 1976. It is the most disastrous example. Fire was caused by not properly extinguished small camp fire. We only know that in the ground zero point there were found german newspapers, so we suppose the fire was set up by East German hikers.

Students notified firemen of fire at 11:00 and that it was registered at the near of the inflow of the creek Biely potok (White creek) into the creek Kyseľ where one smaller gorge enters greater one. By that time the gorge was accessible by hiking trail and was considered to be the prettiest gorge in Slovak paradise with waterfalls Barikádový, Kaplnkový, Roklina, waterfall in Temnica, and Obrovský waterfall (none of these is accessible now) and waterfall of Karolíny in lower part of the gorge.

At that time (11:00) fire was at the area of only 10 x 12 meters. At those days there was serious drought. Fire was spreading with a disastrous speed to all directions despite 65 firemen fought against it yet first day. The effort was simply worthless. Fire spread also under rocks in the form of underground fire and all roots of trees was fired. There had to be prepared routes for fire trucks. 338 firemen fought 5 days with whole their equipment, until the fire was finally extinguished by heavy rainfall. Some 29,22 hectares of forest was fired. It is not a huge area, but very exposed nature reserve, full of cliffs and trees (mostly spruces) grew on slopes up to 75 degrees. It was a terrible destruction. Ladders were demolished and the whole hiking trail was closed.

There have been many scientific observations in the gorge since then and they do not predict pleasant future for the gorge. Dead trees without roots were falling down the cliffs next 10 years. Without forest cover steep slopes erode, thus the danger of rockfall is still immiment. Bad situation is even worsened by allochthonous chamois, and in winter by avalanches. Positive is only slow regeneration of the larch (Larix decidua), which grows in spite of autochthonous pine-trees (on exposed ridges) and spruces (on slopes up to 40 degrees). Larch is expected to prepare the soil for pine-trees and spruce (Picea abies), which dominated before the fire.

There is a scientific article published about the fire and its consequences after 25 years (in slovak language, pages 14 - 15) - this section was written with the help of the material in this article.

On 23th october 2000 was first spotted fire that occured in massif Tri kopce (northern part near Hrabušice) at fround elevation Krompľa. Fire was set up by not extinguished camp fire on the crest of Tri kopce on the not frequented hiking trail. Fire remained untouched until 24rd october. At that day 6 unexperienced people in service of keeping down fire were killed by the fire and totally 80 ha of the forest destroyed. Firemen tried to keep down fire until 3rd november. Fire was definitely kept down by the rainfall on 7th november. It was the most tragic and largest fire in Slovak paradise NP.  However, nature was hurt more by the fire in 1976. Although, 20 ha of the destroyed forest lies in the national nature reserve Tri kopce (8.1 % of the area of that national nature reserve).

There were applied different attitudes after the Kyseľ gorge fire from those after Tri kopce fire. Kyseľ fire was whole in national nature reserve, so hardly any human assistance was provided to help in forest regeneration. Only some local seeds of spruce were distributed by a helicopter. This has not resulted in success, small spruces died very soon. In Tri kopce case more human and forestry assistance was provided. You can find the info in scientific article. Info in slovak about that article is here.

From 23rd July to 3rd August the forest fire occurred in the Slovak Paradise National Park as well as on two other places in forests of eastern Slovakia. Some photos are to be found here. The fire occured in the massif of mountain Koč in complicated terrain near the gorge of Malý Sokol. There was destroyed 16 hectares of forest because of the fire. It was the biggest fire since the year 2000.

The NP employees said the area of Slovak paradise is more likely to suffer forest fire due to it is a carst plateau with very steep slopes at edges - the terrain is complicated and the soil soon dehydrated in case of droughts. The (not frequented) trail from Blajzloch to the saddle of Kopanec was opened to the public after some months of closure after the fire.

Follow the warnings of the Mountain rescue service. Warnings for ranges in Slovakia is here ("Slovenský raj" is for Slovak Paradise). 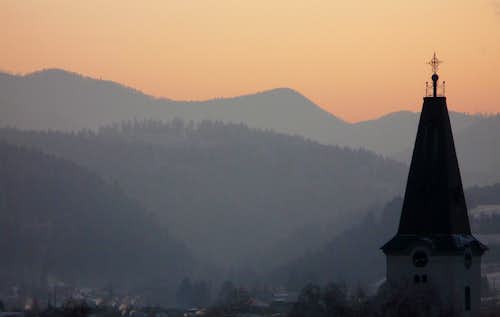 Two campings are located close to the Northern area (fees are charged):

Podlesok is more "centrally" located than Čingov, but less easily accessible directly by public transportation. It is not too much walking from Hrabušice, though, and it is also possible to hike there with backpacks from Čingov through the Hornád-canyon.

There is a camping place at Dedinky, by the side of artificial lake Palcmanská Maša (fees are charged). 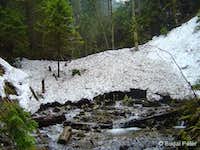 Slovenský raj offers activities around the year. The most popular (and crowded) season is definitely the summer, when trails are clear of snow and the temperature is warm.

In winter, there are good possibilities for cross-country skiing and ice-climbing on the frozen waterfalls (where allowed - see Climbing section).

If you consider visiting in wintertime, it may be a good idea to contact the local mountain rescue service (see below) for up-to-date information and further advise.

There is also a webcam at Kláštorisko (working only in the summer season).

Slovenský raj (1:25000 and 1:50000) by VKÚ Harmanec is a very good one, accompanied by a tourist guide booklet that has cross-sections for some of the possible routes. The booklet is unfortunately only with Slovak text (nevertheless, figures can be understood clearly). Available for sale at most touristic places around the area (in the High Tatras as well) and online at VKÚ Harmanec.

Navigable online version of the 1:50000 VKÚ map can be found here.

Page of the NP administration
Only in Slovak, official info and notifications.

Tourist guide
Only in Slovak, but with much more information. If you have read through the previous sections and got familiarized with the names and some Slovak expressions, you shall be more or less able to navigate on the page.

Informative page
The link takes you to the English version of the page. Also available in German, French, Polish, Czech, Hungarian and Dutch versions. Some of the links there will take you to pages not translated yet.Descriptions of the main gorges in English can be found here.

Dobšina Ice Cave page
Well-designed page by the Slovak Caves Administration. The link takes you to the English version.