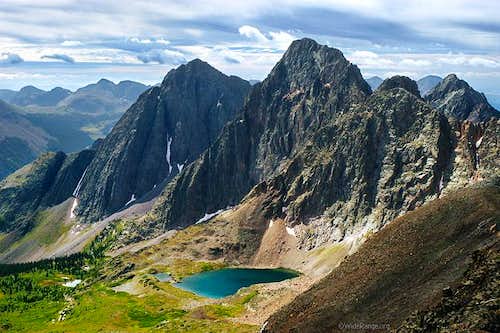 Storm King Peak lies in the eastern arm of the Grenadier Range and within Weminuche Wilderness area (Weminuche Wilderness is the largest wilderness in Colorado). Most climbers and backcountry travelers overlook this mountain, in favor of the more accessible and dramatic ascents that can be made from Vestal Basin. This area is for those who love the solitude of extended wilderness travel.There is a technical route reported here for Storm King's impressive north side. A fun scramble can also be used as a standard approach from the south. However the standard approach = Southwest Ridge is still a little challenging from a routefinding perspective, because once you are on the mountain, your views become enclosed by highly broken terrain.This peak is truly remote and will require a two night backpacking trip for most people. The shortest way is 15 miles long from Beartown (not an actual town, only a site) with nearly 6000 feet of elevation gain. 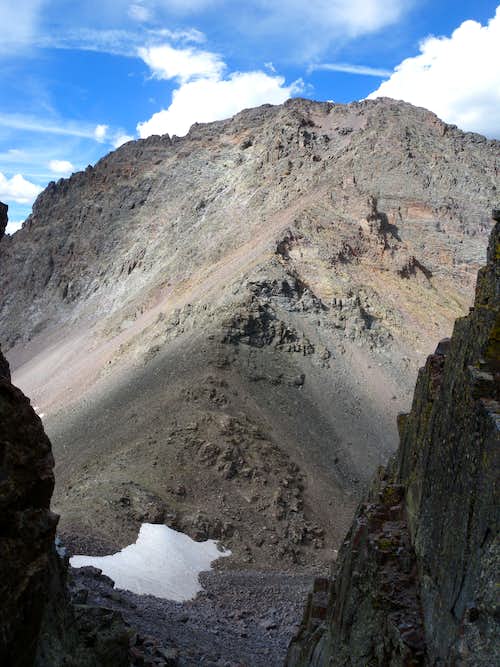 To find the standard route up Storm King Peak, traverse southeastward from Vestal Basin and along the southern flanks of the Trinity Peaks (see route description from "Unnamed Trinity Pass" on the Grenadiers main page.) Carefully follow the route east, regaining some elevation as you pass the small ponds at 12,200'. Gain the saddle beneath the south ridge of Storm King Peak and take a moment to admire the view above Lake Silex.From the saddle, turn north and begin the ascent. Stay left and just below the southern ridge, until it gives way into a bowl near the top of the mountain. On your way up you may encounter a few pinch points and a lot of loose quartize talus. Although exposure is minimal, you will find yourself concentrating on your scrambling to work your way through the pinch points and around large amounts of broken talus. Once inside the bowl near the top of the mountain there are large piles of wasting talus- the kind that move for 20 feet in every direction if you step on it. As you work around or through the inside of the bowl, be conscious of potential rockfall and your ability to provoke erosion. 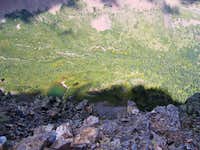 Be careful, the summit is abrupt and holds some amazing exposure!NOTE: This is the kind of mountain where you need to make mental notes from your approach at the base, and also near the summit in order to retrace your descent. From the summit, it is very important that you are conscious of reentering or circling along the bowl, which generally faces *southwest.* When I did this route in 2007, I did not find the decent from the summit to be very intuitive, because of the broken terrain. Then in 2011 when I was coming off Peak 9, I watched from across the basin as someone made circles up and down this southeast face. He kept descending southeast, inevitably finding the incredible exposure that develops on the Lake Silex side, and necessitating a return to the summit. 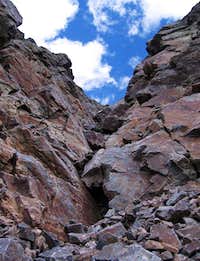 After watching him return to the summit four times, I shouted from across the other mountain "stay west!" This advice guided him into the bowl, and then down the western (left) flank of the southern ridge to the saddle. All is well that ended well. We met at the saddle to exchange hellos. This is the only time I have ever seen someone in the eastern Grenadiers.

Getting there- Logistics and wilderness restrictions

Storm King Peak lies in the Weminuche Wilderness, and the standard regulations for campsites and group sizes apply. For any questions, call the San Juan Public Lands Center in Durango.The eastern Grenadier Range and Storm King Peak are a true wilderness experience, suitable for dedicated backcountry travelers. From the west you would begin the standard approach to Vestal Basin, which begins at the train stop on the Animas River in Elk Park (see the Grenadiers main page for more information.) You will need to spend your first night inside Vestal Basin. From Vestal Basin, Storm King Peak can be done as a very long and strenuous day hike, spending the night again at the Vestal Basin campsite. Some backpackers may elect to continue past Vestal Basin to either Stormy Gulch, or the Balsam Lake area. Alternatively, Storm King Peak can be accessed from the Vallecito Creek area, an even more distant approach including either Hunchback Pass from the north, or the Vallecito Creek trail to the south.