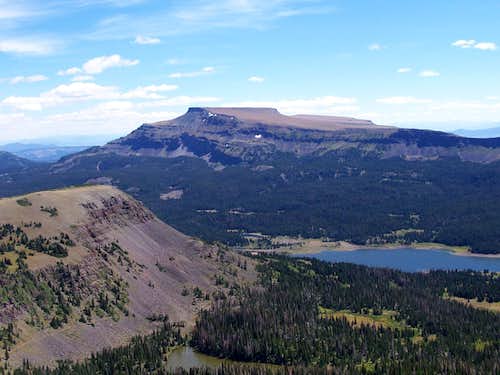 Flat Top Mountain as seen from Devils Causeway on September 6 2008. 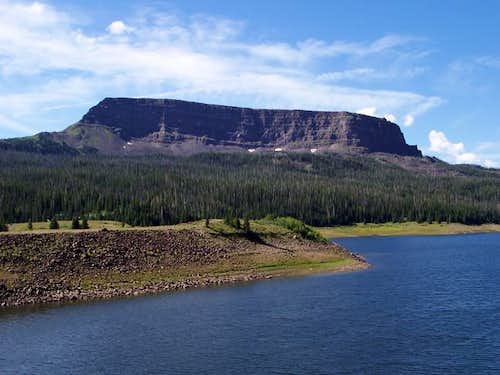 This is the un-named peak west of Flat Top as seen from the trail up Flat Top from Stillwater Reservoir. August 13, 2005.

The West Ridge of Flat Top Mountain is the standard route and by far and away the most popular route on the mountain. From Stillwater Reservoir, the North Derby Trail is followed south for 2.1 miles to the saddle between Flat Top Mountain and Peak 11815. From there, an unofficial trail heads 2.2 miles east along the gentle and beautiful ridge to the summit of Flat Top Mountain.

This route is 8.6 miles round trip with about 2200 feet elevation gain. 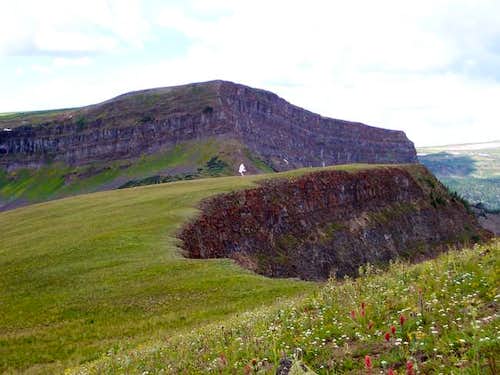 Looking west down the route of Flat Top to the saddle. The route up Flat Top is interesting, but not steep for an off-trail route.

Other routes on Flat Top Mountain are very seldom climbed. You can reach the saddle mentioned above from several trails from the south and from the Stump Park Road, but this requires a much longer high and drive.

The north side of Flat Top Mountain may offer some interesting snow routes early season. The ridge from Dome Mountain to Flat Top would make an interesting route as well. 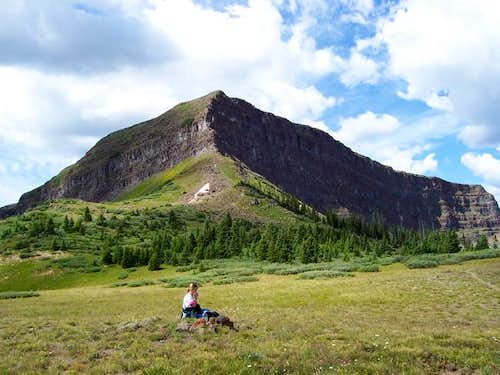 CLICK HERE for current campground information for official Routt National Forest campgrounds. The ones in the Yampa River district are in the same general area as Flat Top Mountain. 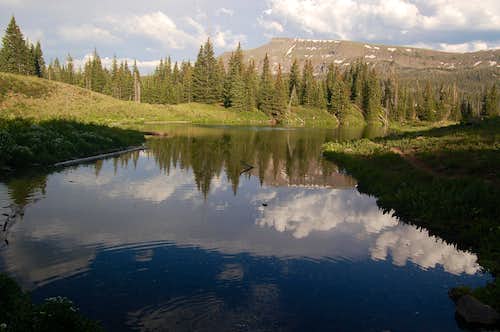 There are some campsites along the trail between Stillwater Reservoir and the saddle. Beyond and including the saddle is open alpine terrain above timberline, so a perfect weather forecast has to be in place for considering camping there.

There are many beautiful, but popular campsites around Hooper and Keener Lakes south of the saddle.

Flat Top Mountain could be climbed year-round by an experienced climbing party, but the roads to Stillwater Reservoir is open only from around Memorial Day or early June to sometime in November, so outside this time period, this would probably be a three day trip.

The Flat Tops (especially the northern and western section) receive much snow, so despite the lower altitude than the 14'ers, the peaks remain buried in snow until mid-July. Snowshoes are recommended in June.

The Flat Tops have many mosquitoes in July, and sometimes into early August.

Mid August to mid September is good because the mosquitoes are gone.

From September and into December is hunting season, so wear blaze orange and use extreme caution. On the plus side, hunter traffic usually keeps the roads open until around Thanksgiving weekend. Late November might be the best time to make a “winter conditions” ascent because after the road closed, this would be very long trip. 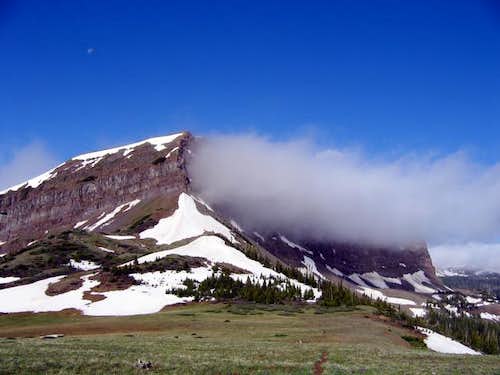 The peak west of Flat Top Mountain as seen in late June.

Weather and climate data for Marvine Ranch at 7800 feet elevation is below. *National Weather Service Data 1972-1998. Expect much wetter conditions at higher elevations. The area around Flat Top Mountain will average around 10-15 degrees colder in the daytime than Marvine Ranch; nighttime temperatures won't have as big of a difference.