Conejos is a gentle and rolling mountain located in the south San Juan Wilderness Area. This mountain is very much like most of the other peaks/mountains in Colorado in that the summit is easily attained by a simple tundra walk and that once at the top, the views are worth their weight in gold.

The southern San Juan Wilderness tract is rather large encompassing about 160,915 acres which includes some of Colorado's most remote and stand-alone wilderness. This is an area meant for those seeking solitude, quiet and a solid backcountry experience. The peak is located squarely within the middle confines of the wilderness, it is removed from ANY notable peaks (read: Fourteeners) or sizeable towns. Conejos does rise above 13,000' but for such a 'low-ish' peak (for Colorado anyway), one would expect average views...not so.
Conejos Peak is the highest peak in Conejos County. But in regards to the views, the lower valleys and forests gently fall away from this highpoint in slow, rolling strips green hues with interspersed veins of reflected blue. Because much of the surrounding terrain is lower, the vistas from the top are quite literally 360° with unparalleled views.

This is only a class-2 mountain (hike) but it does sport some decent prominence (1,912') and for number and stat crunchers, it is the 505th highest peak in Colorado. And to make matters easier, there is even a dirt 4x4 road that can take would-be enthusiasts to almost 11,600'! So to say that this peak would make for an excellent overnighter is an understatement.

Area highlights would include: the bulk of the south San Juan Wilderness, Platoro Reservoir, the ghost town of Summitville, Trujillo Meadows and in my opinion, the seriously underrated Cumbrec and Toltec narrow-gauge Railroad. Conejos Peak is a destination that lies off the beaten tourist path. Reward yourself with pristine and serene country!

Conejos Peak is located in the South San Juan Wilderness of the Rio Grande National Forest. Conejos Peak Ranger Station is a “service first” office, which means that the Forest Service and the BLM share the office and work together to manage these public lands for a variety of uses including: recreation, grazing and timbering. With the mixed usage, please ensure things aren't spoiled for future hikers, climbers etc.

Conejos Peak Wilderness is reached after hiking approximately one mile down the trail. No motorized vehicles, including ATVs, motocross or even bicycles are allowed in the wilderness. About a half-mile down the trail, a gate is reached. Please do the responsible thing and secure/close the gate after passing through to prevent the local cattle from escaping and wandering off.

Forest Service road #250 is only open from May to November. This road is closed in winter. You'll need to check with the ranger station above to make sure FS 250 is open if you're planning an early-season climb. Also check to see if the road to the trailhead is open.

Afternoon thunderstorms are a daily occurrence in the South San Juans. Start early and plan to be down low back at camp or at the very least, off the mountain by 'noon-ish' to avoid the storms. Practically the entire hike & scramble is above treeline, so there is very little shelter in the event of a storm.

Following beta via Lists of John 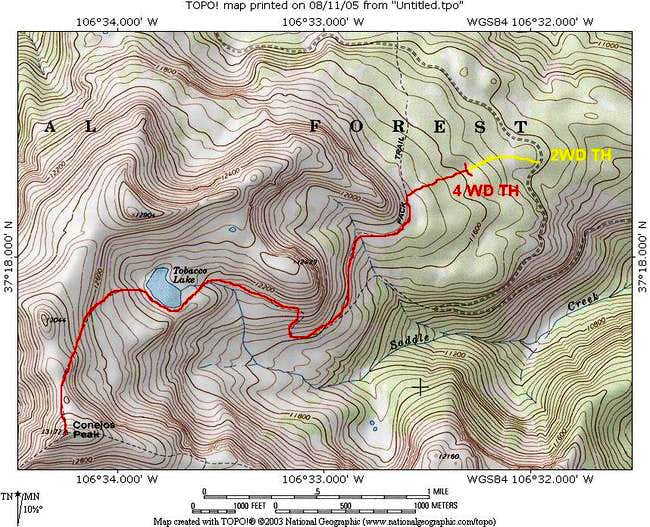 Except for about 100 yards, the entire hike and climb is above treeline. The trail is very evident until reaching Tobacco Lake. After the lake, the trail is somewhat obscure and the general route follows cairns across the tundra. Due to horse traffic, the trail can be muddy in places.