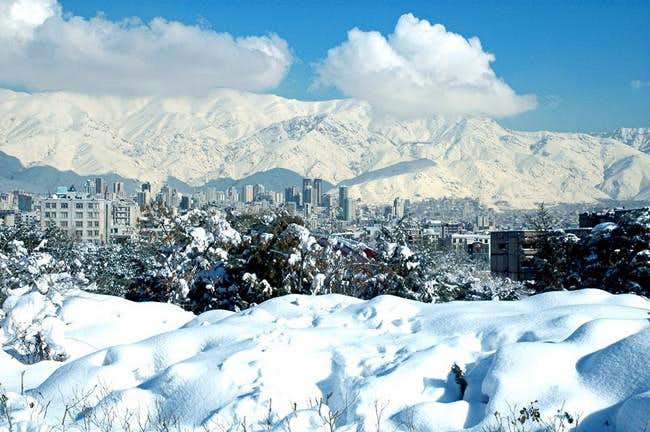 The Alborz Mountains form a dense, long and narrow chain that runs through northern Iran separating the Caspian Sea from the central plateau of Iran. The higher peaks of the Alborz exceed heights of 14 to 15 thousand feet with the 15912 ft (4850 m) summit of Mt. Alam (Alam kooh) as the range's second highest peak. The dormant volcanic cone of Mt. Damavand soars far above the rest of the mountains to an elevation of 18606 ft (5671 m) forming the country's highest peak. The proximity of the mountains to the Caspian Sea has created a steamy lush environment on the coastal plain and the northernmost slopes. The rest of the mountains, however, are mostly bare, limiting trees to the banks of the streams at the bottom of the valleys. Grasslands, alpine tundra and permanent snow cover the higher elevations. Winter brings a heavy coat of powdery snow several feet deep creating an ideal environment for skiing. 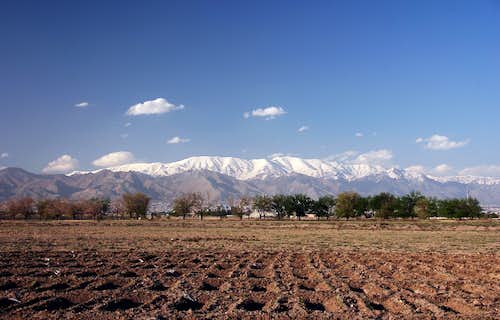 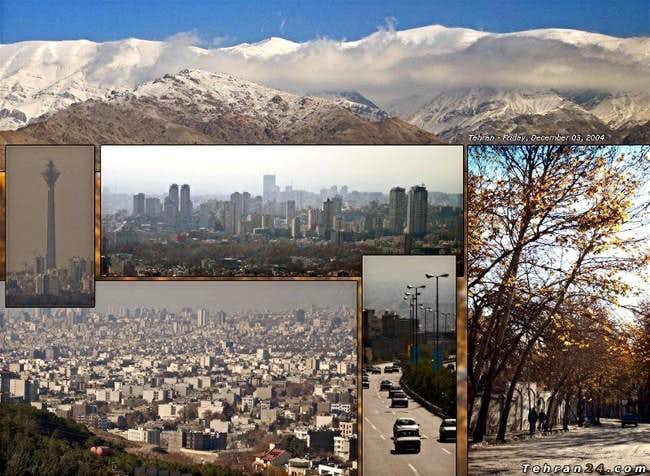 Mt. Tochal is an integral part of the city of Tehran, where urban and alpine co-exist.

Tehran is a giant city that is home to more than 10 million people. This crowded city has been blessed with an awesome skyline. On a straight line, the 3964 m summit of Mt. Tochal is only 7 Km away from the northernmost neighborhoods of Tehran. At home, at school and in the office, all you have to do is look out the window to get a glimpse of this great mountain.

Mt. Tochal marks the southern boundary of the Alborz Mountains at Tehran's longitude. It rises over a sloped plain where the city of Tehran is located. The city ranges in elevation from around 1800 m at its northern end (where sprawl has driven the neighborhoods up the slopes as far as possible) down to1000 m at the southern end (where it approaches the margins of the central desert of Iran). The summit of Mt. Tochal (known as Sar Tochal) is a high point along the length of a 12 Km long ridgeline that is entirely above 3500 m (much of this ridgeline is higher than 3700m). While the eastern 8 Km of the ridgeline runs east-west and looms directly above northern Tehran, the western 4 Km takes a northwest-southeasterly direction and its view from north Tehran is blocked by lower peaks such as Palang Chal (3520 m) and Doshakh (3045 m) (see topomap).Besides the official summit, other peaks/high points can be defined on the crest of the ridgeline. The most notable of these is the 3876 m summit of Mt. Shah Neshin 3.75 Km to the west of Sar Tochal.

From mid autumn to mid spring, the higher slopes of Mt. Tochal (say above 3000 m) are covered by a thick blanket of snow. Although in winter it does snow in Tehran, the snow usually melts away after a few days of sunshine. The same is true for the south-facing slopes of Tochal below 2400 m. Patches of snow stay on the higher slopes well into early summer. The sight of snow can be an open invitation to those who wish to escape the 40 degrees C temperatures of Tehran's summers. From mid summer through early autumn, the mountain appears brown and barren. At times, city smog can severely limit the view of the mountain.

Several hiking trails start in the northern suburbs and climb the mountain to various elevations. West to east, these include Darakeh, Telecabin, Darband and Kolak Chal. Darband offers the most direct route to the summit. Except for the Telecabin, the rest of the trails follow tree-lined mountain streams at the bottom of valleys where trailside cafes provide a place to rest and enjoy refreshments. During the recent years, mountain hiking has become much more popular. On weekends, scores of people jam-pack the trails. Rock climbing opportunities are also available in many areas the most famous of which are the Bande Yakhchal and Kolak Chal Walls (see Schematic Map). Bande Yakhchal is a huge rocky outcropping that sits to the east of the Darband Valley. It is a few hundred meters high and reaches a top elevation of 3120 m. Kolak Chal Wall, located above the Kolak Chal Shelter, has an elevation of 3340 m on its top. Both of these impressive walls are well-visible from Tehran.

m to a point on the crest of the mountain 3740 m was completed in the late 1970s. At the time, it was claimed to be the world's longest gondola line. There are several ski lifts around the main line: a few over the south-facing slopes near the Gondola's 5th station (2935 m) and two or three over the north-facing slopes near the top station where a hotel has also been built (the higher ski lift goes up to around 3900 m in elevation). The ski season on the top station is said to last until June (for more information go to Tochal.org). Despite its potential, the Tochal ski area has not been fully developed and is unable to compete with the much larger and more popular resorts of Shemshak and Dizin 60 km away.

From Tajrish Square in northern Tehran, go to Darband St. and follow it uphill (north) until the end of the street at Sarband Squre at the base of a cliff 5900 ft (1800 m). Go up the stairs at the end of the street to reach the trail. The trail goes through a "village" known as Pase Ghale and follows a tree-lined stream at the bottom of Darband Valley where there is an overabundance of vendors and streamside cafes. This is the most crowded part of the trail where the more casual hikers aggregate. At around 8000 ft (2400 m), you will reach a steep rocky area. Steel ladders and cables installed in the rock will help you negotiate the more difficult cliffs. The stream has created quite a few waterfalls in this area which is known as Abshar Dogholoo (Twin Falls). Struggle up the cliffs for the next 1000 ft (300 m) until they suddenly disappear at around 8850 ft (2700 m). Another 150 ft (50 m) up a little hill and you reach the Shir Pala shelter. There are a number of cafes in the area. Treat yourself to a cool drink because after this, there will be no more cafes. Most people hike only to Shir Pala so you may finally be able to find peace and quiet from here on. The trail then heads west away from the stream and the trees going up a hill that will get you to the top of a ridge at 9700 ft (2950 m). You are now half way there. Turn north and follow the ridge up a steep slope all the way to the summit. You may encounter occasional small bands of cliffs that are not difficult to pass. At around 11420 ft (3480 m) you will find a shelter known as Siah Sang or Amiri which was built in the early 1990s in memory of a climber who died of exposure at that site. A small shelter can also be found on the summit. 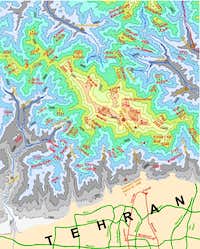 Unfortunately, the view from the summit may be severely limited depending on the amount of city smog. On a clear day, to the south, you can see the vast metropolis of Tehran with the desert plains in the horizon. To the north, there is an endless sea of high peaks. Like a true monarch, Mt. Damavand rises far above the rest of the mountains. 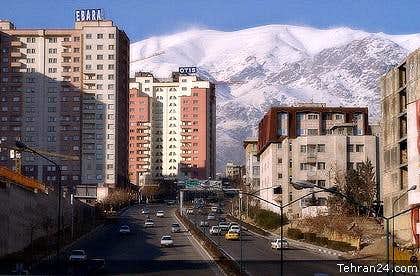 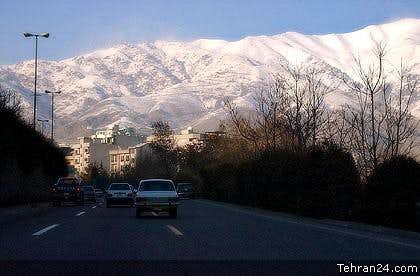 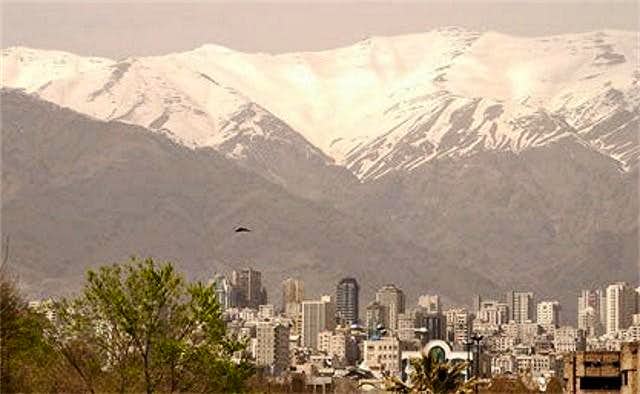 
No permits or fees required. 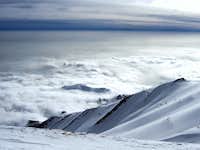 Please keep in mind that as you move around Tehran, the view of Mt. Tochal changes considerably. The farther north you go, the more distorted the shape of the mountain becomes. The sketches below show the mountain as it appears from around the east end of Mirdamad Street. From this angle, major distortions include the fact that "Kolak Chal Wall" appears much higher than it really is and "Koma Chal" appears much farther west than it really is (see reference).

View from the north

Thank you for the information.

There is also a new shelter in mid-way of Shirpala--touchal.Named Amiri shelter . That made for memorial of Ali Amiri who passed away exactly there.it can hold about 20 people.
Regarding the ski resort also new sky area has opened by the 7th station of touchal Tele-Cabin line.That also have a 5 Star hotel at the buttomn of ski area established on 2002.

Thank you for the information.

Hi there, thanks for sharing the detailed info about Tochal. I´m intending to go there in late august and I wonder how to find the trailhead. How can I instruct the taxi driver? Is it near to the base station of the telecabin? Moreover, is it advisable to bring a tent and a sleeping bag or is it provided in the shelters? thanks in advance and greetings from Germany Michael

Hi, thanks for contacting me: To find trailhead you need to go to "Koohnavardan Square" (Mountain Climbers Square) Coordinates: 35.82815 North, 51.42658 East. This square is marked on Googlemaps and Mapper.acme.com. The square sits at the north end of Darband Street (To find Darband St., Follow Valiasr and Sharitai Streets to their northern end at Tajrish Square. Darband St. goes to the north of Tajrish Square) To make it easy, go to Tajrish Square and any taxi driver should be able to take you up to Koohnavardan Square (Just say you want to go to Darband to climb mountains). Telecabin is a different place farther west. You can follow a path under telecabin going from 1900 m to 3730 m, then following the ridgetop east to reach the summit of Tochal. I recommend that you do not go to Telecabin. In August, you will find it hot and barren whereas Darband Trail takes you up a wooded valley near a stream. From the end of Darband St. at 1800 m, you go up to Sarchal Shelter at 2750 m. I have not been to the shelter in 30+ years. I know they have rooms you can sleep in. It will be safe to take your own tent/sleeping bag if you plan to sleep there. I do not know if they can provide sleeping bag for you or not. Be ware that on weekends (Thursday/Fridays), the area becomes extremely crowded and the shelter may even get full. From Sarchal Shelter you will go up to Siah Sang Shelter at around 3400 m. This shelter is just one big room I think. You can then go on to the summit. In summer you will see plenty of people. Just follow the crowds.