Fitzroy (also known as Cerro Fitzroy, Cerro Chaltel, Chaltén, and Monte Fitz Roy, 3,375 meters / 11,073 feet) is the highest spire in a compact range of granite (granodiorite) peaks in Parque Nacional Los Glaciares, in Argentine Patagonia. Named after Captain Robert Fitzroy of the HMS Beagle, Fitzroy thrusts above the Argentine plains and Southern Icecap together with its companion peaks Cerro Poincenot, Aguja Rafael, and Aguja Saint Exupery. The peaks are located near the neighboring Cerro Torre group outside of the small village of El Chaltén, reached by bus from the tourist center El Calafate.

Fitzroy was first climbed by the Southeast Ridge (today also known as the Franco-Argentine ridge) on February 2, 1952 by Lionel Terray and Guido Magnone, members of a French expedition. The standard route used today is a variation of the first ascent route (the Franco-Argentine route), consisting of 600 meters VI/VI+ A2. Routes on the Southeast Ridge have remained frequently climbed since the first ascent, although at least 15 major routes have been put up on the peak. Other notable routes include the Southwest Ridge (aka the Californian route), which was the standard route until the linking of the Franco-Argentine routes, and the Supercanelata on the West-Northwest face (VI WI 5)

The Fitzroy area is also popular for trekkers, with a number of day hikes and circuits leaving from El Chaltén offering views of the range. Popular destinations include Laguna de los Tres, Laguna Torre, and the non-technical ascent of nearby Cerro Eléctrico.

Most travelers to the area travel to El Chaltén by bus from El Calafate. Cheap flights to and from El Calafate are available through LADE (Líneas Aéreas del Estado), operated by Argentina’s air force. Space can be limited on LADE flights, so try to make arrangements as far in advance as possible. Other airlines offer reasonably priced flights to the El Calafate airport, but these airlines are decidedly more expensive than LADE. There is a LADE office in the bus station in El Calafate. A wide variety of accommodations is available in El Calafate, and several hotel and hostel options (as well as some nice campsites on the edge of town) are available in El Chaltén.

Alternatively, visitors can fly into the larger Rio Gallegos airport in Argentina, though the airport in El Calafate located more conveniently to the park (and has expanded its services in recent years).

Travel by bus to El Chaltén can be an adventure, though it is certainly more pleasant than bus trips in other South American countries can be. The trip takes around four hours, though poor weather can double the travel time. After a storm the dirt roads can get quite muddy and become a major hazard. The bus system is convenient, cheap, and well-supported, thus renting a car is not recommended. However, if you do drive, follow Bus offices in El Chaltén are located along the main street, Avenido San Martín.

Climbing permits for the peaks in the Fitzroy area are required (but free) - they can be acquired at the national park center in El Chalten. There is a small fee for entrance to Parque Nacional Los Glaciares.

Climbing Fitzroy is most feasible during southern hemisphere's summer months, December through February. Fitzroy has been climbed several times during the southern winter, with the first winter ascent on the peak put up in July 1986 by Eduardo Brenner, Sebastian de la Cruz and Gabriel Ruiz on the Supercanelata. Paolo Crippa, Dario Spreafico and Danilo Valsecchi completed the first winter ascent of the Franco-Argentine route in 1988. The first solo winter ascent was completed in 1990 by Japanese climber Yasushi Yamanoi via the Southwest Pillar route.

Climbing at any time of the year is subject to the notoriously fickle Patagonian weather, with many climbers waiting weeks for a long enough fair spell to make an attempt.

Damien Gildea adds:
"There is a lot of good route information, with some topos, at: http://www.expe.com/montagne/ams/patagonie/index.htm" (text in link is in French). 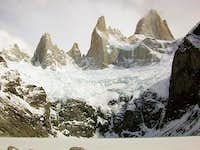 Cheap camping is available on the outskirts of El Chalten at the end of Avenido San Martín. The climber's base camp on the Rio Blanco (along the trail to Laguna de los Tres) is also available, but off limits to non-climbers. Please help keep this part of Patagonia a pristine place and utilize leave-no-trace camping practices.

Several hosterías offer campsites on their grounds, with access to hot showers and other services. These campsites are more pricey than the basic campground on the outskirts of town (no facilities), and fill up more quickly.

Fuel (especially isobutane canister fuel) can be difficult to come by in Patagonia. The best option is therefore either bringing a multi-fuel stove (such as the MSR Whisperlite International) or purchasing a stove locally (which can be found at reasonable prices in shops which cater to trekkers and travelers in major tourist centers, such as Puerto Natales in Chile or El Calafate in Argentina). Water around the Fitzroy area is generally safe to drink, but if you are in doubt (or just want to be on the safe side) you should boil or treat your water. Camping and trekking supply shops in the major tourist hubs are likely to carry water treatment chemicals, but bringing them from home is probably a good idea.

Check out the following for information on climbing in Patagonia: 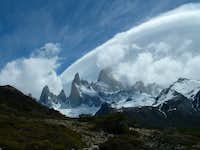 Weather in Patagonia is often fierce and can determine the success of any climbing or trekking trip in the region. It is a good idea to reserve plenty of extra bad weather days in case it is necessary to wait out a major storm, whether you are climbing or just trekking in the area. Be prepared (both mentally and with gear-wise) for high winds, frequent and unpredictable showers (rain or snow), and intense sunshine at any time of the year.

El Chaltén
Website for the village of El Chaltén at the base of Cerro Fitzroy. Contains links to accomodations, guiding services, transportation, etc.

Belgian Expedition
Information on a young Belgian expedition to Cerro Fitzroy (thanks to Myzantrope for this informaiton). Text is in French.

7 Walls, 7 Continents
A summary from mounteverest.net covering two Spanish climbers' ascent of the Supercanelata (Supercouloir) route on Fitzroy as part of a multi-continent big wall project.

Recent Ascent (from the Alpinist)
A major new variation on the North face of Fitzroy.

Thanks for the addition! Is there an English version of the page?

This info and tops in fact come from the great book by Gino Buscaini and Silvia Metzelin that is only available in Spanish and Italian.

There is a lot of good route information, with some topos, at:
http://www.expe.com/montagne/ams/patagonie/index.htm

Thanks - I've updated the information. -Howie

Another link to add could be the website of the young Belgian expedition that went to Fitz Roy early this year : http://www.giftlist.be/patagonie/expedition.asp

I believe that Cerro Electrico is, in fact, a technical ascent. A non-technical route leads to a col on the summit ridge within 100-200 vertical meters of the summit. However, as far as I know, the actual summit cannot be attained without 1-2 pitches of relatively easy rock-climbing. That, at least, is what the caretakers at Piedra del Fraile informed me. Preliminary scouting suggested the same, although the 100kph winds and blowing snow at 2100m made it difficult to be sure. There may be a class 4 route hiding there somewhere. Excellent page, by the way. I may add pages for Cerro Madsen and Loma de Pizarra, but I need to find some pictures first.

Photos from the Supercanaleta route

I went to El Chalten in March of 2011. The highway from El Calafate to El Chalten is now paved. the trip is fast (3 hours), the bus is comfortable, affordable (about $8 US) and there are two trips a day.