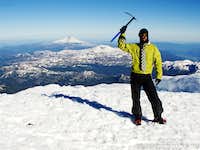 Lanín is an ice-clad, cone-shaped stratovolcano on the border of Argentina and Chile. It forms part of two national parks: Lanín in Argentina and Villarrica in Chile. It is a symbol of the Argentine province of Neuquén, being part of its flag and its anthem. Although the date of its last eruption is not known, it is estimated to have occurred within the last 10,000 years. Following the 1906 Valparaíso earthquake a local newspaper reported the volcano to have erupted, however in a work published in 1917 by Karl Sapper claims the news was disputed.

The ascent is regulated by the management of Argentine National Parks and the Argentine National Gendarmerie, and is technically relatively simple but has however a much higher level of exposure than the neighbouring volcanoes. The nearest towns, usually employed as a base for climbers, are Pucón in Chile and Junín de los Andes in Argentina.

Lanín lies at the Atlantic-Pacific water divide of the Andes, being for that reason located in the Argentina-Chile border according to the 1881 border treaty between these countries. To the north and south lies the Tromen and Paimun Lakes respectively.
Lanín is the easternmost volcano of a north-west south-east oriented chain of 3 large stratovolcanoes volcanoes, being the westernmost volcano Villarrica and Quetrupillán the one in the middle. This alignment is attributed to the existence a fault beneath the volcanoes. In historical times Lanín has been the least active of these volcanoes. Apart from Quetrupillán and Villarrica there a number of old eroded remains of stratovolcanoes in the alignment.

The volcano itself lies rests above a basement of gneisses, felsic plutons and volcaniclastic sequences. The basement rocks constitute a tectonically elevated block limited in the west by the north-south Reigolil-Pirihueico Fault. Ages of ranging from Late Pliocene to Early Pleistocene have been suggested for the oldest known parts of the volcano which are dacitic lava flows with columnar joints.

You can start at the town of San Martin de Los the Andes, in Argentina, where one can find advise, food, equipement for hire and local guides and there is a tourist bureau. The lodgings are not very cheap, but there is the camp-site of Automobil Club Argentino and other camping areas.

The Lanin volcano is at the border with Chile. It is necessary to take an international bus (Temuco direction via Junin de Los the Andes, Pucon, Villarica), and to go down in Gendarmeria Tromen (or the border and park guard), in an area called Puerto Canoas, a little before the border. There you can camp.

Info added in dec 13th, 2010: Also, you can stay at Junin De Los Andes and depart from there. There is a center of information to Lanin volcano alone, amazing. It's located at the main square of the city nearby some touristic agencies. Buses leave the city daily to the border with Chile and you just have to get off the bus at the gendarmeria.

The expedition will take something of like 2 or 3 days.

You can stay at Junin de los Andes in the home of the Sponton Family. In 1998, when I visited the area, Gladis Sponton and her husband where very helpful with us, and they very well liked by the climber that visit the area.

There's several hostels you can stay at the city and plenty of info about Lanin at the city. 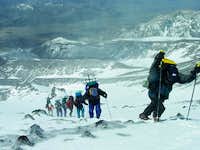 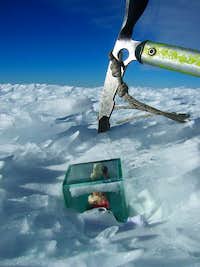 It is necessary to have a permit to climb the mountain. This can be inquired upon with the rangers in the Park, the Intendencia de Parques Nacionales in San Martin, or at the Gendarmeria in Tromen. No fee is required what so ever (2010) to obtain the permit to climb.

The rangers are quite handy but also very strict in the application of rules.

Please note that you will have NO right to climb up if you start after noon even if you clearly state that your intention is just to arrive to one of the shelter and continue the day after.

In order to obtain the permit to climb the park's rangers will ask you to have the following gear (and be sure, they'll check your backpack to see it all!):

It was possible to rent locally some of the equipment above but at very high price (the radio was 30 pesos per day in jan 2010).

The climbing of Lanin volcano doesn't take much of a "high-tech climb", it's mostly walk up for the normal route, which i'll describe here: 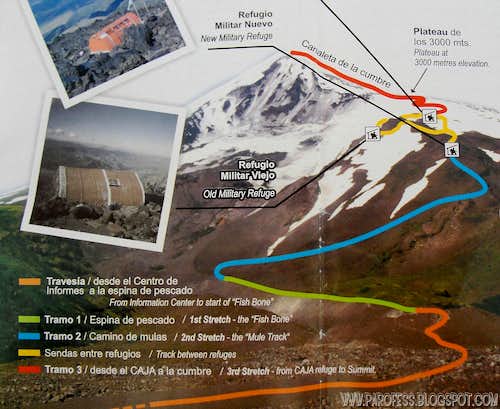 The image shows the different parts of the climbing, zoom in to see better.

The normal route trail starts near the ranger station, in the parking lot. First you cross through the Lenga woods along a well marked track to reach the foot of the volcano. From there follow the red and yellow stakes that lead to the start of the ascent itself, a stretch known as the "Espina de Pescado" (Fish Bone). The steepness increases gradually till you reach a turn off. Keep right following indications on sign-posts to reach the "Camino de Mulas" (Mula track). On this section, marked with red-painted stakes and stones, you'll reach the "Nuevo Refugio Militar" (new military refuge). From there keep right to the "Viejo Refugio Militar" (old military refuge aka "Caja"). Spend the night and go for the summit next morning, the ascent from there to the plateau and the summit can take up to 9 hours just for the summit. Too much altitude difference to overcome: 1.400m. 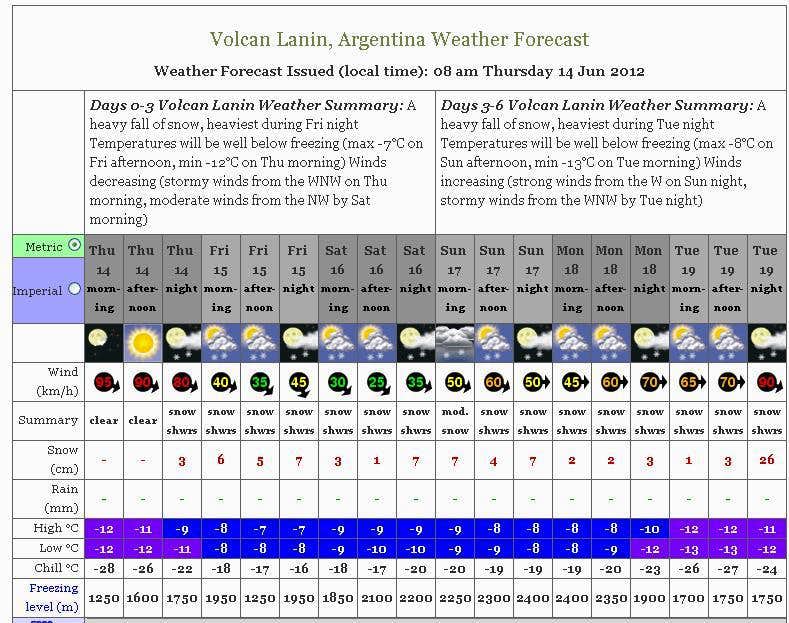 Click at the image to jump to the weather forecast page.

This volcano is part of the volcanic chain wich begins in Villarrica volcano at the Villarrica National Park, Araucanía region, Chile. There is a route on the chilean side with a few alternatives, also you can start at Pucón, where you can find guides, equipment (for buy or hire), food, advice, etc. or Curarrehue wich is the nearest town from Lanin (just 37km). The road from Pucón don't have difficulty and there are two bus companies that run this way every day. About the name of this volcano there is another theory wich says Lanin is the junction of two words in "mapudungun" language (Mapuches)these are: "Lan" ,that means crag, and "Lil",death. It also says that the summit is inhabited for a furious evil.