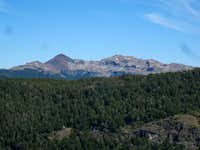 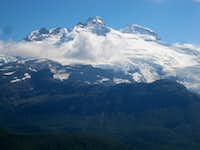 Cerro Volcánico is a two-coned summit straddling the Argentina/Chile border and located within Parque Nacional Nahuel Huapi (Argentina) and Parque Nacional Vicente Pérez Rosales (Chile).  The peak lies just south of Paso Vuriloche, a remote hiking route connecting the two countries.  The impressive volcano Cerro Tronador looms over the north side of the pass.  Access is best via Pampa Linda on the Argentine side.  From Pampa Linda, a mediocre trail climbs 900m in 5-6 hours to Cerro Volcánico. 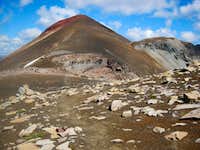 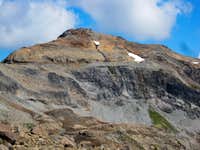 There are two summits nearly 1km apart with the connecting saddle just over 100m below the summits.  The official trail only leads as far as Cerro Volcánico East's impressive red cinder cone.  There is no actual trail to Cerro Volcánico West's moonscape summit plateau crowned by a Comisión de Límites benchmark, but with some minor route-finding skills it offers no technical difficulty.  Most maps seem to show the west peak as being higher, but my GPS measured both peaks at 1875m. 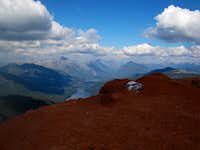 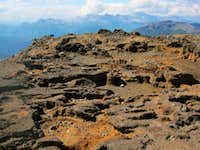 The views are outstanding from both peaks.  Cerro Tronador dominates the viewscape to the north, but the view stretches to Volcan Osorno and Puntiagudo in Chile, as well as Cerro Bonete and Cerro Granítico in Argentina.  One fun part about this climb is how different the two peaks are from one another, with an abrupt change occurring right near the col.  Combined with a scenic, varied hike in through a quiet infrequently visited, yet easily accessible part of the park makes this hike highly recommended. 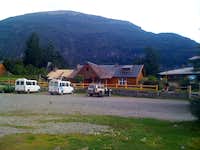 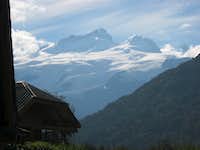 Tronador from Pampa Linda
From Bariloche, there is one bus daily for Pampa Linda, at the base of Cerro Tronador.  The bus leaves at 8:30 from in front of the Club Andino and usually arrives at Pampa Linda around 11:00.  The return bus leaves at 17:00 sharp, arriving in Bariloche at 19:00.  As of March 2013, the round-trip fare to Pampa Linda is $AR 160 and one-way is $AR 100.  This touristic bus is only available during the summer season, with the frequency diminishing to five and then three days a week on the periphery of the season. 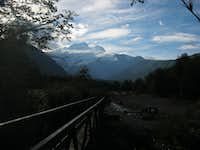 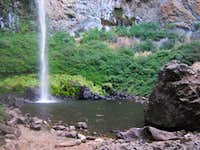 From Pampa Linda, follow the main road towards Ventisquero Negro for ~500m, then turn left towards Saltillo Las Nalcas.  In another ~500m, the trail begins on your left.  Follow signs for Saltillo de las Nalcas, Paso Vuriloche, Cerro Volcánico, and/or Refugio Viejo.  After five minutes, cross a bridge with great views of Tronador, then continue five minutes to the turnoff for the waterfall.  The route follows the trail to the right towards Paso Vuriloche and Cerro Volcánico, but the quick detour to the impressive Saltillo Las Nalcas is well worth it. 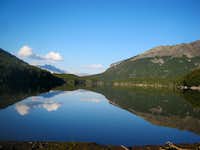 From here, follow the trail through mature forest with a dense bamboo understory up the Río Cauquenes for ~45 minutes to the first of four creek crossings, several of which require you to get your feet wet.  Cross the creek and follow the trail for ~30 minutes to an obvious fork between the trails for Paso Vuriloche and Cerro Volcánico.  Fork left and head down to another creek crossing.  The trail then starts climbing towards Laguna Rosada, but not before crossing the creek again near a stream junction.  Climb fairly steeply through dense woods for a half hour to reach the final creek crossing.  The woods soon open up and the trial continues uphill another half hour before cresting a gentle forested pass and descending briefly to Laguna Rosada.  You reach the lake by a wet meadow and the trail seems to disappear.  Just cross the meadow, trying to keep your feet dry.  The trail re-enters the woods after 100m and soon leads to a nice camping spot in the woods. 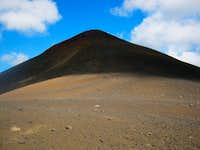 To head for the peak, follow the trail up through the woods for half an hour until you reach a large alpine meadow.  At this point, the trail becomes difficult to follow.  Make sure to note the location where the trail leaves the woods, then turn sharp right upon reaching the meadow and follow tracks for 500m snaking through the meadows until reaching the woods again on the other side.  This is the route-finding crux of the route.  The good news is it seems easier to follow on the way back.  When the trail re-enters the woods, it climbs further uphill through beautiful lenga forest until reaching tree line after another 15 minutes.  Above treeline, cairns and painted rocks lead you along a faint path through gently sloping stable scree along the ridge for a half hour until you reach the base of the red cinder cone of Cerro Volcánico East.  From here, pass an international border marker and climb steeply for 15 minutes to reach the summit of Cerro Volcánico East. 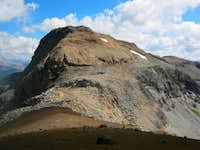 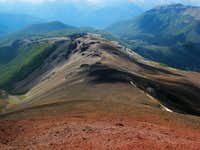 To continue to Cerro Volcánico West, descend scree slopes to the col, climb over two small hillocks, and begin your ascent.  Bear right to avoid the steeper stuff, but generally just head straight up, it's easier than it looks.  A cairn and some debris mark the summit.  On the way down, descend to the col and traverse around the base of Cerro Volcánico East to return to the border sign.  Follow the trail back to the lake in about an hour, taking care not to get lost in the meadows.  From Laguna Rosada, the descent to Pampa Linda takes just over two hours.

Cerro Volcánico is located within the Parque Nacional Nahuel Huapi.  Shortly after leaving the highway to turn onto the dirt road that leads to Pampa Linda, there is a fee charging station to enter the national park.  As of March 2013, the price is $AR 65 for foreigners and $AR 25 for Argentine citizens and residents.  You can stay as long as you wish, but if you leave and re-enter you will be charged again. 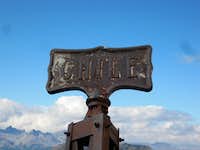 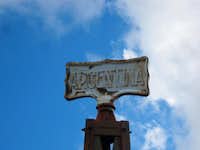 Cerro Volcánico lies on the international border between Chile and Argentina.  I imagine you're supposed to register with the Gendarmería Argentina (1/2 km before the bus stop at the hotel) to enter the border zone, but I didn't bother.  Similarly, the Guardaparque (1/4 km before the hotel) asks you to register for safety purposes before any overnight trip, but I personally prefer to avoid them.

The summer season in northern Patagonia runs from mid-December to mid-March.  The weather is likely to be nicest in the area during that time.  Cerro Volcánico should be reasonably approachable between November and May.  I believe that the road to Pampa Linda is closed outside of this time frame (at least the public transportation shuts down), complicating the access for any potential winter attempts. 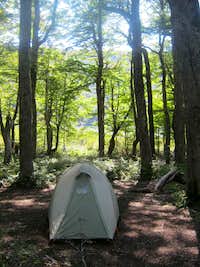 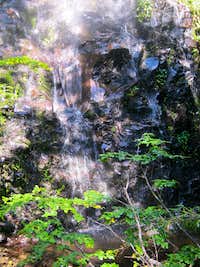 In Pampa Linda, I believe there are two fee campgrounds: the Club Andino Bariloche Auto-Camping and the Camping Agreste Río Manso.  There are also two lodging alternatives in Pampa Linda, a hostel and a hotel, but don't expect either to be cheap.  Laguna Rosada, en route to the peak, has a lovely free back-country campsite in a nice forest near the lake.  Water is available from a small, beautiful waterfall.  The water appears to be pristine, but is probably best treated, as it didn't particularly agree with me.  Additionally, there are numerous other excursions that can be done from Pampa Linda, offering a variety of alternative camping options.