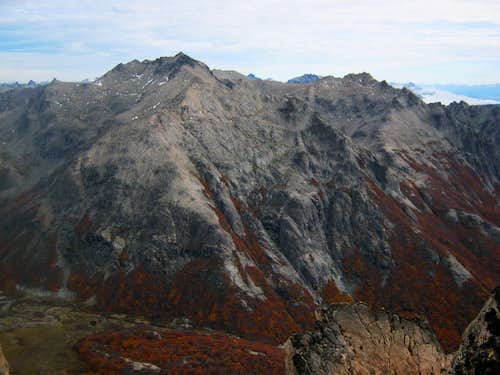 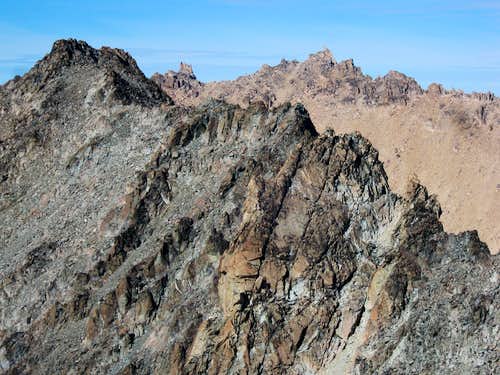 
Cerro Tres Reyes is a 2000m peak in Parque Nacional Nahuel Huapi. It does not seem to be climbed very often, which is somewhat surprising given that it is easily accessible from the popular Frey-Jakob trek that ranks as the most popular backpacking trek in the region and quite possibly in all of Argentina. Although observable from many frequently visited spots in the park, the peak is often overlooked due to the fact that it looks more like the high point on a ridge than a real mountain peak. That said, the summit itself is actually quite impressive. In fact, I didn't understand the reason for the name of the peak until I got up there. The summit of the mountain actually features three different peaks that surround a small lake. Excellent views abound towards Tronador, the Catedral massif, Cerro Negro, Cerro Lopez, Cerro Bailey Willis, Cerro Navidad, and Cerro Cuernos del Diablo. 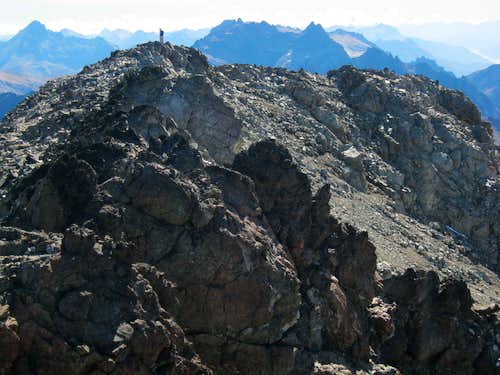 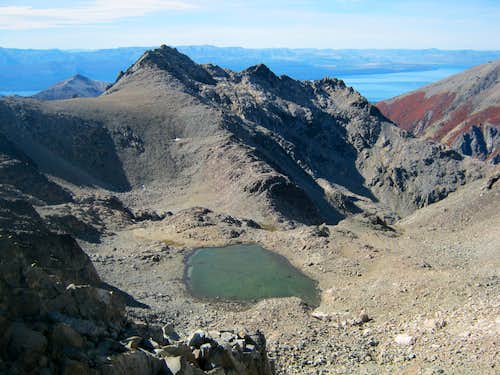 
The mountain can be climbed in a big day hike from either Villa Catedral via Refugio Frey or from Colonia Suiza via Refugio San Martín. However, most people will choose to climb Cerro Tres Reyes as a side trip on the popular Frey-Jakob trek. This 3-day trek starts at Villa Catedral, spends nights at Refugio Frey and Refugio Jakob and descends via Colonia Suiza. The typical route for climbing Cerro Tres Reyes takes off from the Brecha Negra, which is the col between Cerro Claussen and Cerro Tres Reyes. This pass is reached on the second day of the trek which is the hardest day of the trip. However, a strong hiker shouldn't have much trouble moving camp and climbing the peak along the way. From the Brecha Negra, the route easily follows the ridge up to a secondary summit, but then requires a more complicated traverse to reach the true summit of Cerro Tres Reyes. 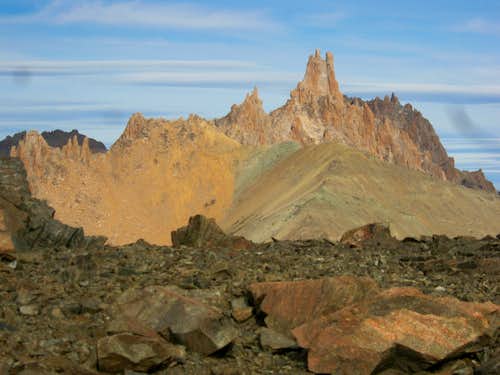 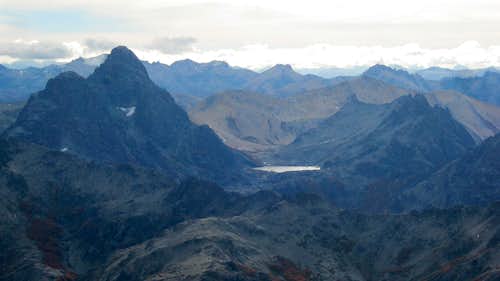 The only route that will be described in detail starts from the Brecha Negra, the col on the ridge between Cerro Claussen and Cerro Tres Reyes. The Brecha Negra can be reached by good trails from either Villa Catedral (via Frey) or from Colonia Suiza (via Jakob). Casual backpackers are strongly encouraged to do the loop from Frey to Jakob, as this allows for descents of looser, scree slopes and ascents on more stable, gradual terrain. However, hardy experienced folk won't have much trouble doing the loop in the reverse direction.

From Bariloche, there is hourly bus service to the ski resort at Villa Catedral from roughly 7am to 7pm. As of 2013, the bus costs 10 pesos each way which must be paid in cash. Updated bus schedules are available at 3 de Mayo - Catedral 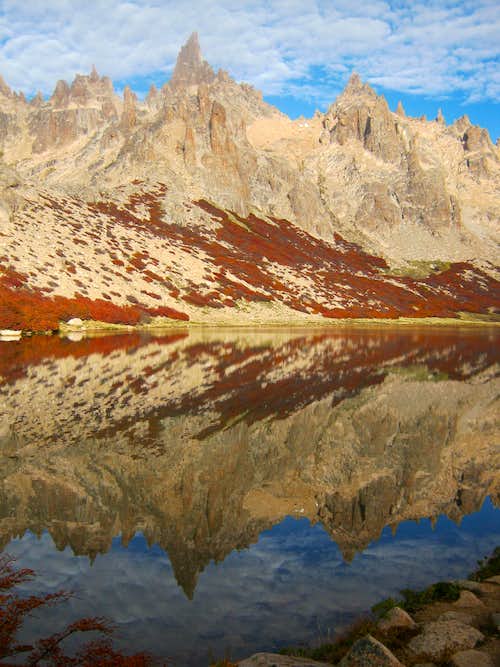 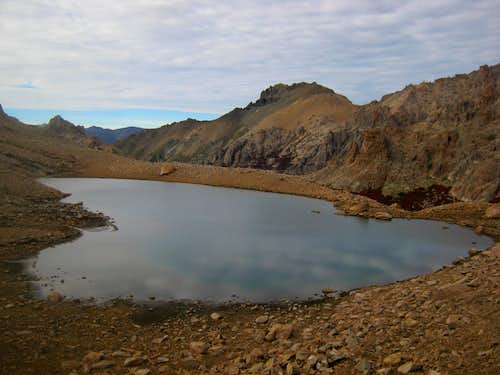 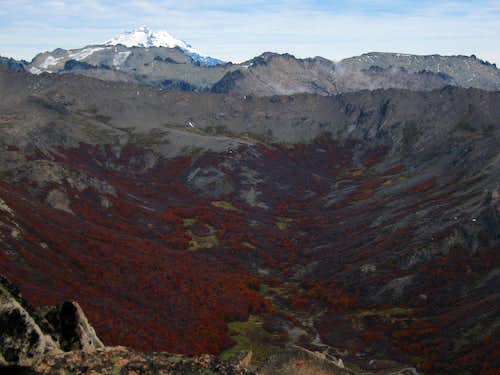 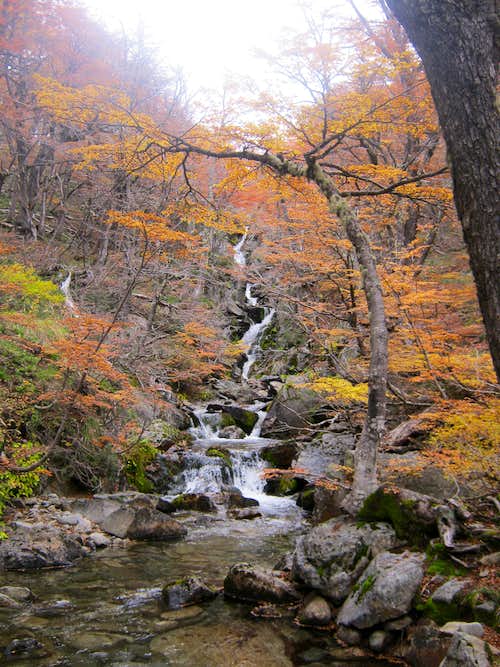 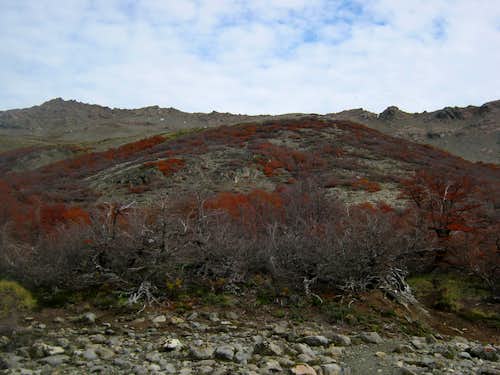 Climbing to Brecha Negra
From Villa Catedral, the trail to Refugio Frey is a 10km hike that takes about three hours on average. Slower hikers with heavy backpacks may take up to four hours. Strong day hikers might make it in a little over two hours. The trail starts at the ski resort parking lot. For the first 90 minutes, the trail is mostly flat as it traverses the hill through an old burn, crossing several small creeks. After reaching a trail junction, the trail climbs gently for 4 minutes, crossing a bridge over Arroyo Van Titter and continuing up to the Refugio Petricek. The last section of trail climbs steeply for another 45 minutes before finally crossing a small creek near the outlet of Laguna Toncek right near Refugio Frey.

From Frey to the Brecha Negra is a long hike that can take anywhere from three to six hours depending on fitness level and backpack weight. Follow the trail around the right of Laguna Toncek, continue up the meadow, and climb steeply up to Laguna Schmoll. Go left around the lake and climb steeply to a flat area called the Cancha de Futbol. Turn right and continue another 100m to reach the first pass and your first views of Cerro Tres Reyes, one to two hours from Frey. Bear left and descend steep, loose scree slopes to reach the woods, then follow the trail down to possible campsites in the Valle Rucaco, 30 to 60 minutes from the pass. Continue to follow the trail up Valle Rucaco.  Abandon the woods and climb steeply up a sparsely vegetated gray hill to reach a false pass. Cross a flat rocky area and ascend once again to reach the Brecha Negra, perhaps 1 1/2 to 3 hours from the campsites.

From Bariloche, there is service to Colonia Suiza several times daily. As of 2013, the bus costs 7 pesos each way and requires a prepaid ticket or a rechargeable bus card. Updated bus schedules are available at 3 de Mayo - Colonia Suiza 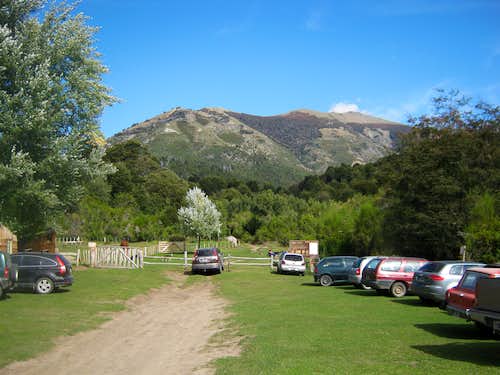 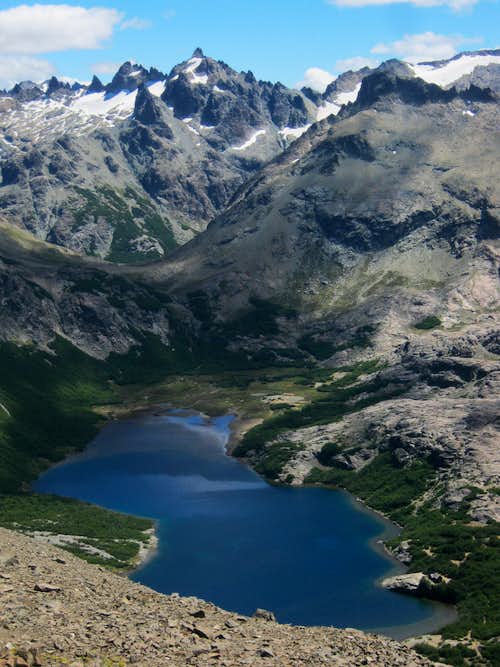 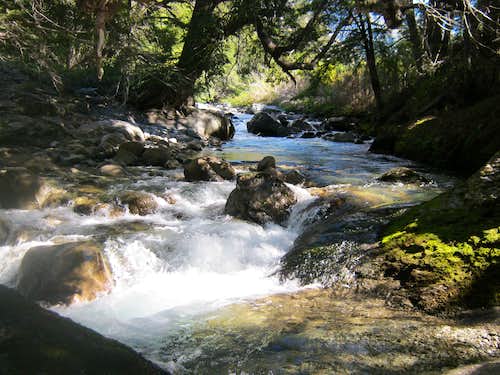 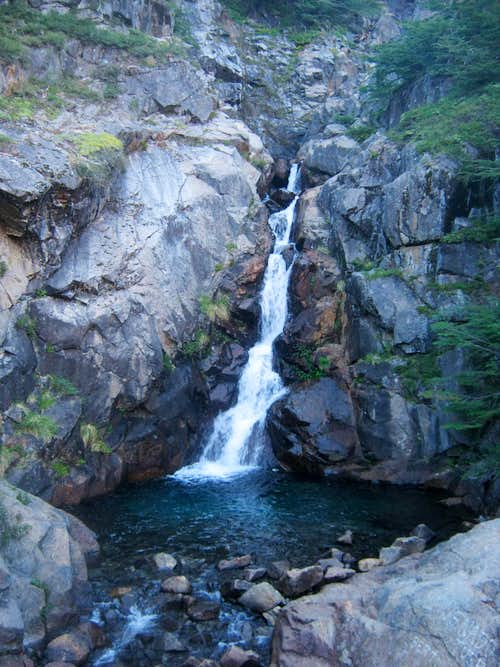 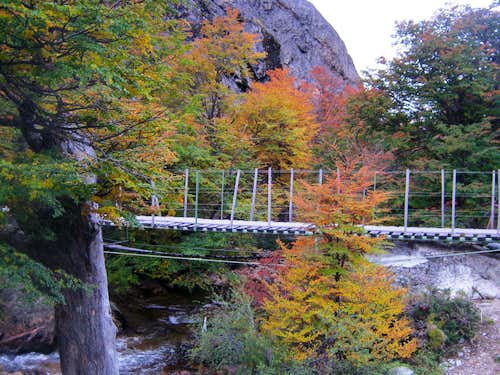 Puente Jakob
From Colonia Suiza, the 24km walk to Jakob takes five hours on average. Slower hikers with heavy backpacks may take up to six hours. Strong day hikers can make it in four. From the bus stop in Colonia Suiza, choose either the road through town or the road to Villa Catedral. Both roads meet on the other side of town, leading around Lago Moreno, past a small waterfall, arriving at the Picada Jakob after an hour. With private transportation, you can drive to the trailhead and cut 6km and one hour off the walk. There used to be irregular bus service to the trailhead, but it is not available at this time (2013). From the trailhead, turn up the road, pass a ranch, climb up the hill, and drop down to the river near some popular swimming holes. From here, the trail continues up the river to a bridge two hours from the trailhead. The trail crosses the river, continues for another hour, and then climbs steeply for an hour to reach Refugio San Martín on the shores of Laguna Jakob.

To climb from Laguna Jakob to Brecha Negra, head back about 100m towards Colonia Suiza from the Refugio, turn right, descend briefly, and cross the creek near the outlet of Laguna Jakob. Be prepared for a steep ascent that takes a full hour on the way up and perhaps half that on the way down. The trail is fairly well marked and reasonably stable, but it is quite steep and at times can be somewhat loose and rocky. The trail exits the woods after a few minutes, ascends a rocky avalanche chute until the vegetation disappears, continues to ascend above treeline, traverses to the left, ascends some more, and finally reaches the Brecha Negra. 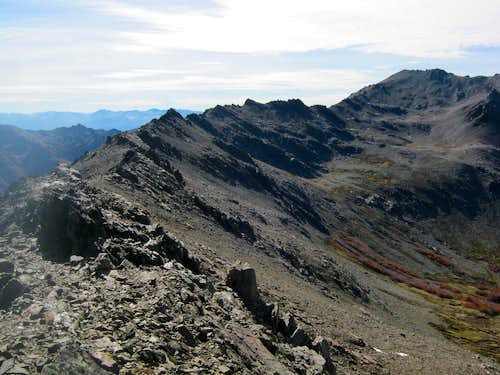 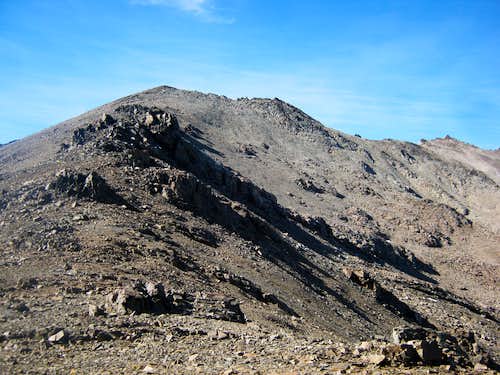 From Brecha Negra to the summit should take almost two hours each way. Follow the ridge to your right. It is somewhat tedious, but flat and easy, with a few small rocky spots that are easy to bypass.  After nearly an hour, the final ascent to the false summit begins. The climb steepens, but remains easy, following small, stable talus up to the false summit. When you arrive here, you will be treated to great views. You may be disappointed to see there is a considerable traverse to reach the true summit. You will also see the summit lake and the third summit. 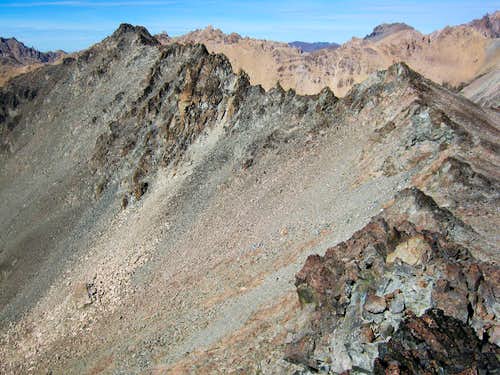 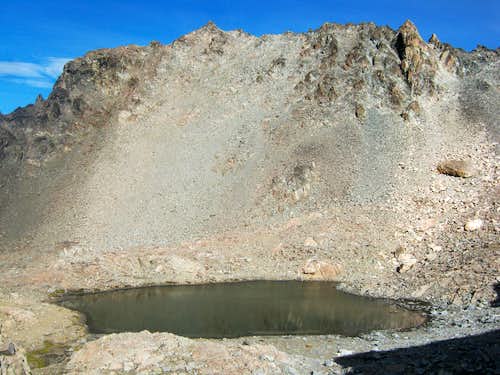 To continue to the summit, you have a few options. The direct traverse involves a short section that probably requires a belay. I followed the ridge to the col between the true and false summits, then traversed under the cliffs on loose talus before climbing steeply to the true summit. The other alternative is to descend to the summit lake and climb up the other side. I returned this way so that I could refill my water bottles for the descent. The climb to the third summit should be comparable in difficulty, but it was hard to tell from a distance. 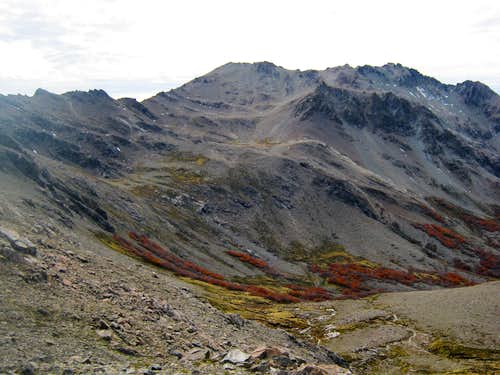 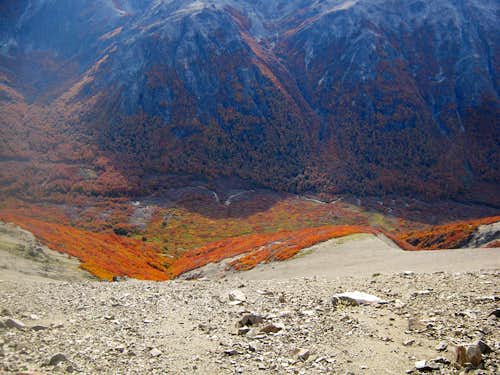 To continue on the Frey-Jakob trek, return to Brecha Negra the way you came. Alternatively, there are a few possible shortcuts. Coming from Frey, leave the trail in Arroyo Rucaco, head up a small basin, and climb scree slopes directly to the false summit. On the Jakob side, fun scree slopes and nasty bushwhacking let you descend directly from the ridge to the trail to Colonia Suiza, but this isn't recommended. In theory, a descent directly from the third summit to the bridge would be most efficient, but there are some major cliffs to avoid, so be careful.

The summer season in northern Patagonia ranges from mid-December through mid-March. Conditions are likely to be best on Cerro Tres Reyes during this time. From December through April, the peak should be fairly accessible. November and May should also be reasonable in most years. Climbing the peak outside of this time frame will be more challenging, with considerable snow on both the approach and the route. 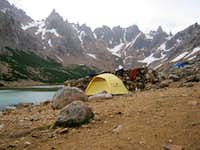 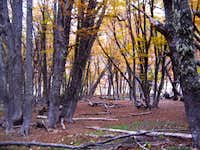 Free camping is available at both Refugio Frey (Laguna Toncek) and Refugio San Martín (Laguna Jakob). Most people will climb Cerro Tres Reyes as part of the three day Frey-Jakob trek, spending a night at each refugio. Both sites have bathrooms and provide water free of charge. They also offer simple restaurant service and overnight lodging at fairly reasonable prices. There is also the option of camping at the undeveloped campsite in the Valle Rucaco. This is the recommended campsite for anybody trying to complete the trek in either two or four days.