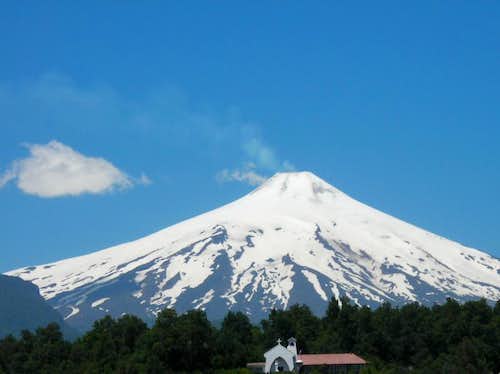 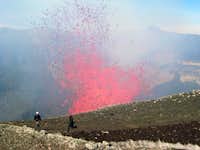 Villarrica is one of Chile's most active volcanoes, rising above the lake and town of the same name. The volcano is also known as Rucapillán, a Mapuche word meaning "House of the Pillán". It is the westernmost of three large stratovolcanoes that trend perpendicular to the Andean chain along the Gastre Fault. Villarrica, along with Quetrupillán and the Chilean portion of Lanín, are protected within Villarrica National Park. Ascents of the volcano are popular with several guided ascents reaching the top during summer.

Villarrica, with its lava of basaltic-andesitic composition, is one of only five volcanoes worldwide known to have an active lava lake within its crater. The volcano usually generates strombolian eruptions, with ejection of incandescent pyroclasts and lava flows. Melting of snow and glacier ice as well as rainfalls often cause massive lahars (mud and debris flows), such as during the eruptions of 1964 and 1971.

Villarica's symmetrical edifice stands in the Chilean Central Valley as the westernmost of an alignment of three large stratovolcanoes. The alignment is attributed to the existence of an old fracture in the crust, the North West-West trending sinistral Gastre Fault Zone, the other volcanoes in the chain Quetrupillán and Lanín are far less active. This alignment is unusual as it crosses the N-S running Liquiñe-Ofqui Fault, around which most currently active volcanoes are aligned. Currently the volcano covers up an area of 400 km2 and has a volume 250 km3 according to estimates.

About 25 scoria cones dot Villarica's flanks. It also has volcanic caves. The constant degassing at the lava lake turns Villarrica's otherwise quite effusive lava more viscous, heightening its explosive potential. Two large ignimbrite layers are visible around the volcano; the Licán Ignimbrite and later the Pucón Ignimbrite.
Villarrica emerged as a volcano during the Middle Pleistocene and grew forming a large stratocone of similar dimensions to the current edifice. 100 thousand years ago during the Valdivia Interglacial the ancestral Villarrica collapsed following an eruption and formed a large elliptical caldera of 6.5 and 4.2 km in diameter. During the Llanquihue Glaciation (Last Glaciation) Villarrica produced pyroclastic flow deposits, subglacial andesite lavas and dacite dykes. The volcano collapsed once again 13,700 years ago forming a new smaller caldera, among other pyroclastic flows the Licán Ignimbrite has been related to this event. Beginning with the Licán Ignimbrite, generated just after the last deglaciation, activity continued in similar fashion. The Pucón Ignimbrite was ejected during a minor collapse the uppermost stratocone 3,700 years ago. 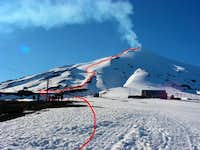 From Santiago de Chile, drive, bus, or fly south to the city of Pucón, located on the eastern shore of Lake Villarrica. Here you can obtain lodging, a guide (see info under "Red Tape" below), gear, and food.

Pucón is approximately 780 km from Santiago by bus.

From Pucon, head back west on the Villarrica-Pucon highway, then head up a dirt road to the enterance of Villarrica National Park (7 km from the highway, 12 from Pucón.) Here you will need to pay a park entry fee (again, see "Red Tape" section below.) Continue up the road to the Villarrica ski resort. From here, a lift can carry you up to about 1600 meters for 3000 pesos, or you can walk to the top of the lift (approximately 45 minutes on foot.) From here, the standard route starts to the left of the lift station. 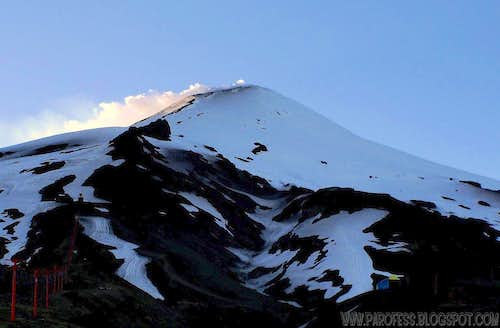 The Chilean Forestry Service (CONAF) requires that all climbers who wish to attain the summit of Villarica either climb with a guide authorized by CONAF to lead trips up the mountain, or be an accredited member of a mountianeering or climbing club, with documented experience in such activities.

Climbing Without a Guide

If you're interested in climbing Villarica without a guide service, you should contact CONAF (visit http://www.conaf.cl), or inquire at the park entrance.

The other option is to climb without authorization. This should be very easy to do, considering the apparent lack of climbing rangers, and it's easy to "blend in" with one of the multitude of tour groups heading for the summit. In other words, enforcement of the rule doesn't appear to be a top priority for CONAF.

Villarrica can be climbed year-round. Great ski touring conditions can be had in Winter and spring (May-November). The peak climbing season is the Austral Summer (Jan-Feb). Be prepared for crowds during this time of year.

Camping in the wild is permitted throughout Villarrica National Park. There does not appear to be any fees associated with camping in the park. Hotels, Hostels, Cabins, and Bed and Breakfasts are abundant in Pucón.

Recommendation:
Kila Leufu Guesthouse as a fantastic base for exploring the Pucón Region. They have private rooms as well as shared. The food is EXCELLENT, and the hosts offer excursions (on foot or horseback) to various lakes, peaks, and hotsprings in the vicinity. Definitely worth hanging out here for a week or longer. 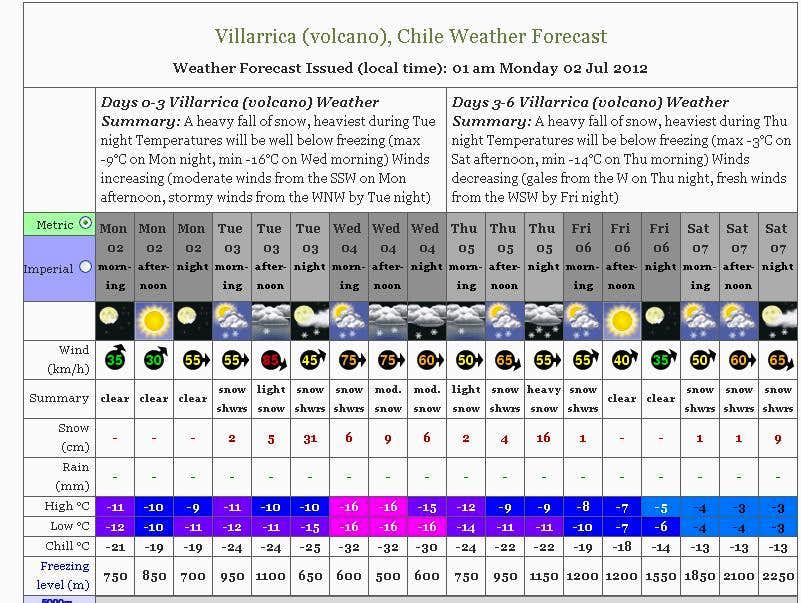 Guide services in Pucon are not difficult to come by. Just about every block in the city has at least one tour company that will be willing to take you up the mountain. Look for recent prices once you get to Pucon. The price for the climb covers your transportation to and from the mountain, equipment (jacket, pants, pack, gaiters, ice axe, crampons, etc.), Park entry fees, guides, and maybe a glass of beer at the end of the day. Some will even provide gas masks. You should pack your own food and water.

Check around with more than one service in town to find the one that's right for you. Be sure to inspect your equipment before heading out. It's a good idea to book a spot at least one day ahead of time, but I had no problem finding an open spot last minute by showing up at one of the guide service's offices in the morning before they left (Most tours leave Pucon at about 8 AM.)

Below is a short list of local CONAF-authorized Guides operating out of Pucón (with web links where available):

It seems to me that there is a round route that goes around the whole volcano massif without actually climbing it. Look for complete info about that once you negociate with your agency the climb if you're interested to do so.

In order to climb Villarrica without a guide, not only must you prove IN SPANISH that you are an autonomous climber (e.g. with a national mountaineering federation card with picture), you must also have crampons, an ice-axe AND A HELMET.

Agree on the helmet front. The less snow there is the more chance you have rocks bouncing down from the old lava flows at the summit. Also main route now slightly different as a result of crevasses opening up since early 2010. Gas mask recommended if spending lots of time exploring the summmit area.

"to climb without authorization"

To Climb this mountain without a valid CONAF authorization should not be considered a valid option: Registration allows time alerting and coordinating rescue operations in case of accident. Also it allows control the inexperienced people who want to perform the tour. There are risks inherent to the mountain that have caused serious accidents, in some cases, foreign tourists have been dead (2012). Deep crevasses, big rock falls, avalanches and exposure to toxic gases. Recommend that option is irresponsible. Only allow you to save a few dollars but will hinder the work of control and commit a criminal offense under the laws of Chile. There is a control point on the path where companies are checked about the number of people, guides and equipment. The guides do not accept responsibildades on tourists that have not been properly registered for that tour. Avoid problems.

I'll second the comments about the importance of a gas mask if you're exploring around the crater. The smoke is rich with hydrogen sulfide, which turns to sulfuric acid on contact with eyes and lungs. I would not like to experience that again.

To get permission you must show a club membership from a climbing club in your country on paper. You must check in at the CONAF office at the base of camino volcan.(Right before the road turns to asphalt) They do not open until 7am. It is not possible to recieve permission for this climb at the CONAF office in downtown Pucon, although this is a good place for questions. They take the permits seriously. You may be turned around by the top of the ski lift if you did not register at the base of the canyon.This is a very easy climb but it is spectacular with the crater and promenice over the valley. It is also easy to rent gear on the main street in Pucon. May be worth renting a gas mask. The fumes are pretty awful.