The Pico de la Maladeta or Maladeta Oriental (3308m) is one of the most importants peaks of Maladeta Massif for its alpine aspect, the privileged position in the center of massif, and because gave the name to full massif.

The first explorers thought that Maladeta was the highest point of the massif and the full range of Pyrenees (it's an optic effect when all the people see the full massif with this peak in the center, it seems the highest) but after the first climb in 1817 by F.Parrot and P.Barrau, they saw a highest peak in the eastern side of the massif, the Aneto (3404m). The legendary guide of Luchon P.Barrau died in this mountain some years later, in the access to Col de la Rimaya. 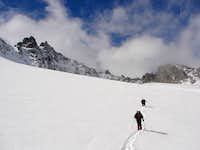 Col Rimaya
The normal route to this mountain is very different in each season:

-In summer a great break in the glacier (rimaya) is impossible to cross (and dangerous) and the normal route goes across the Portillón Superior-Glacier of Aneto-Col Maldito with a chimney of II+. Both normal routes have the trailhead in Hospital de Benasque-La Besurta (North side) 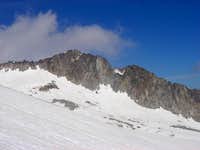 Gl. Aneto
-The peak has another routes from south side across Lake of Cregüeña climbing the peak Abadías (or Maladeta SE) with a ridge of II+ between both summits.

Important: all the routes of this mountain are only for mountaineers. The trekkers and hikers don't must try this peak. The technical material is neccesary (crampons and ice-axe in the glaciers and rope in the chimneys according with the experience in rock-climbing of the partners)

For approach to Hospital de Benasque and La Besurta see the page of Maladeta Massif or Aneto. 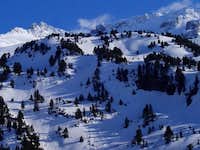 Very important: the road of La Besurta is closed in winter and early in the spring (it's the pist of sky-cross county with snow). From june it's opened. From july to september you can't to access with your car and you must use the bus to la Besurta.
In the acces to south route (Puente de Coronas) is the same case in the track of Vallibierna but generally is opened from the end of april or first days of may. In summer the access is only possible in the bus.

Camping is not allowed, it's forbidden in the natural park. The camping is permited in Pla de Senarta (ayuntamiento de Benasque, a little tax of 3-4 €) or the nearby Camping of Aneto.
The night in La Besurta is a good option in the vehicle but you can't camp with the tent or vivac.
The refuge of La Renclusa is a good option, specially in spring with the road closed (1h45min of walk to the refuge but from La Besurta with the road opened it's only a easy walk of 40 minutes). In winter is closed (only a little hut for emergency).
Many lodges and hotels in village of Benasque.

The best season is the spring across Col de la rimaya and in summer across Col Maldito. Out of this epoch it's only for mountaineers with experience. The winter climb is technical and alpine. 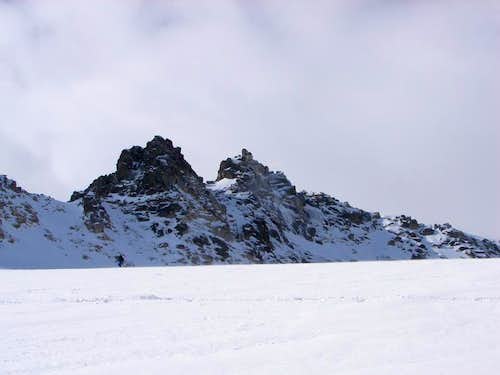 the positioning looks slightly inacurate... Maladeta is not in France (however I wish it was :))))