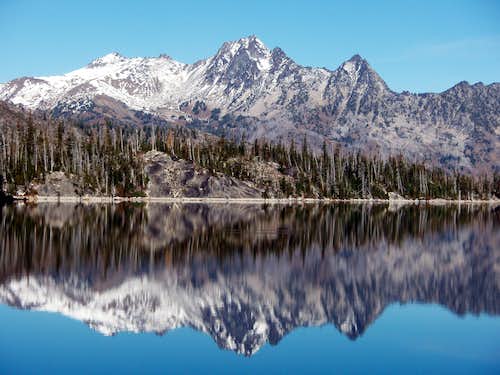 Cashmere Mountain is one of the highest peaks lining the Icicle Creek drainage. There are three main summits above 8000 feet, the central one being the highest. The east peak appears as a black pyramid from the north. From the east, the main profile is also a pyramid and this is easily visible from Highway 2 east of Leavenworth, as well as from it's namesake town of Cashmere, and Wenatchee. Cashmere is the 58th highest peak in Washington State. 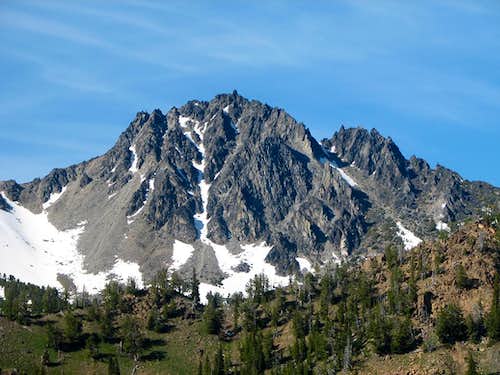 It should be understood that Cashmere Mountain is massive, spanning 6 miles at the base and rising 6500 above the Icicle Creek drainage. It has no less than 4 north ridges. The southwest ridge joins with Eightmile Mountain which in turn is circuitously joined with Jack ridge and Mount Stuart. There are several small lakes on the north and south side of the mountain which carry the name of women; Ruth, Victoria, Caroline, and Little Caroline.  The largest lake in this series, Eightmile Lake, is found in the Eightmile Creek drainage at the southern base of the mountain. 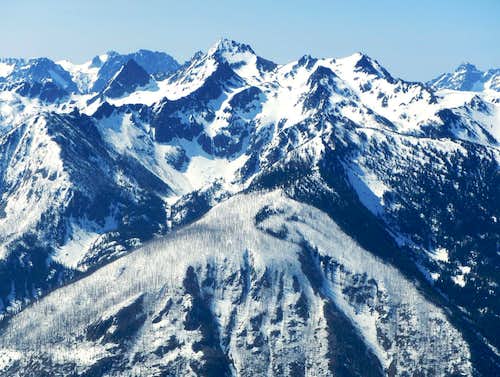 Put simply, the standard route ascends southern slopes past several small lakes and ends on the upper west ridge with class 3 and 4 scrambling. The total distance is 16 or 18 miles depending on which route variation you choose. See the route section for more details. Good winter and early spring ski touring can be found on Cashmere's northern slopes, in the Doctor Creek Area. Most hikers will prefer to make Cashmere a 2 day trip with a pleasant night spent near one of the lakes. Alternatively, the very fittest will be able to do it as a day trip.

From the Eightmile Lake Trailhead (3280 feet), follow the trail up the drainage to the first junction at Little Eightmile Lake (4404 feet). Turn right (north) at the junction and ascend switchbacks through an old burned section of open forest and brushy slopes. 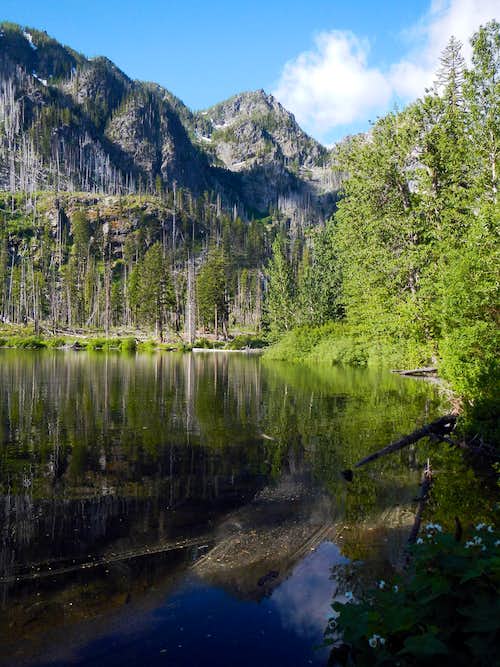 After gaining 2000 feet, a small pass is encountered. Descend 150 to Lake Caroline (6190 feet). The trail contours the east shore of the lake. Beyond Lake Caroline, pass by Little Caroline Lake before encountering more earnest elevation gain. At 6600 feet you will have to make a decision when the trail rounds a bend on a gentle east ridge.

The conventional way to proceed is to follow the trail northeast to Windy Pass at 7220 feet. Doing so will add roughly 2 miles to you round-trip distance. An unconventional possibility is to drop 80 feet off-trail into the broad flat basin to the northwest. If you are attempting to do Cashmere in a day, then this is a wise choice. The route map above displays both route options. 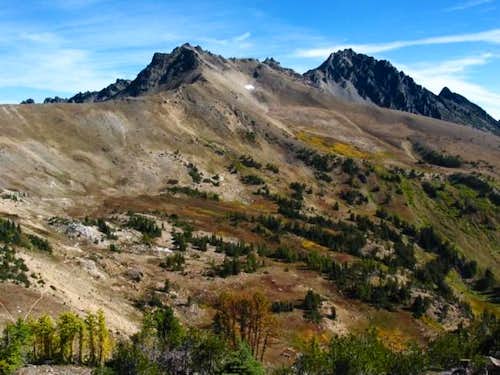 The Broad Flat Basin Below The West Peak

When coming from Windy Pass, turn north and follow the ridge over Point 7555 and then the west peak (Point 8279) or bypass the west peak by traversing the south slope. The next object is to reach the col between the west peak and the main peak. 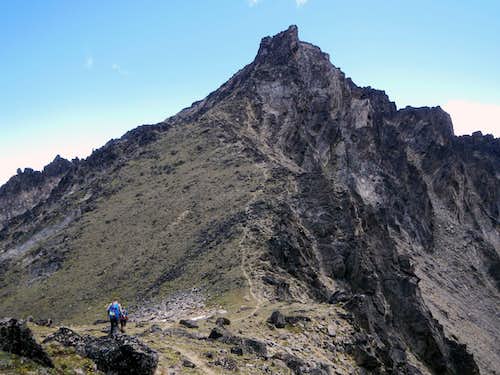 The West Ridge and col

When coming from the broad flat basin, ascend off-trail in a northeasterly direction through grasses, easy brush, small groups of trees, and creeks until you reach a smaller flat meadow at 7100 feet. Cross the meadow and continue northeast until you gain the crest of a rocky south ridge around 7500 feet. This ridge makes for easy travel. Follow the ridge north until you reach 8000 feet. Then traverse east over large talus until you come to the col between the west peak and the main peak. This is where the two route variations join.


At or near to the col you will have an exciting view of the main peak. A small bootpath leads through the col and initially up around to the north. The upper west ridge is a series of tooth like points separated by five main gaps. The scramble route passes through several of these gaps, switching from the north to the south and then back to the north, but it rarely follows the crest. 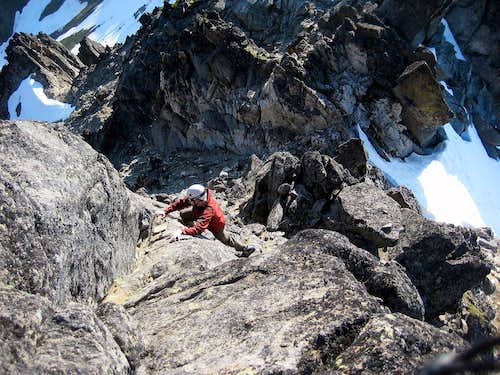 Scrambling Near The Summit

Generally speaking, the rock on the north side is more stable but most of the route is on the south side of the ridge. It might be possible to puzzle out a route which is entirely class 3, but most accounts admit to a few class 4 moves, usually near where the scrambling begins. There are exposed ledges and steep scramble gullies to contend with, all very enjoyable. As the route negotiates the various gaps, often what appears to be the summit is revealed to be another false summit. You will know the right one when you get there. There is a summit register. 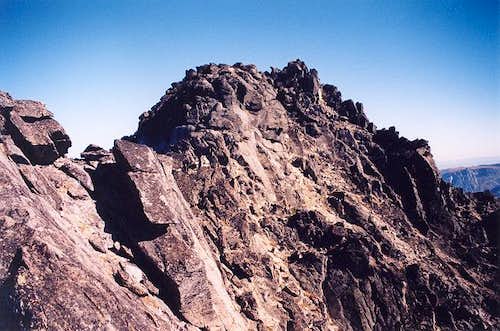 NOTE: Access to the final scramble may be problematic in early season.  Bring an ice ax and crampons if in doubt.  Also bring your helmet regardless of the season.

From the town of Leavenworth on Highway 2, head up Icicle Road 8.4 miles to Bridge Creek Campground. Turn left onto Forest Road 7600 and then keep right at the fork onto Forest Road 7601 just before crossing the river.  Continue another 2.8 miles up a dirt road to the Eightmile Lake trailhead.

Like all areas in the Alpine Lakes Wilderness, you must purchase a permit to park at the Eightmile Lake Trailhead. Permits can be obtained by contacting the Leavenworth Ranger Station. Additional fees apply for climbers wishing to camp in the area. 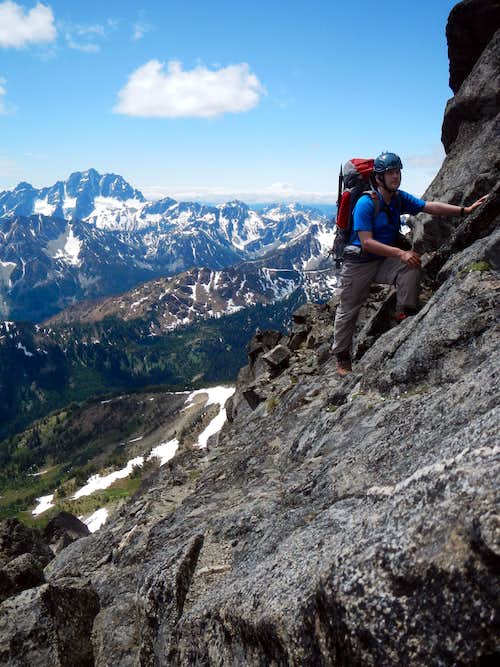 Scrambling on the west ridge
Camping is allowed at Caroline Lakes and Eightmile Lake. The Forest Service requires a permit for camping in this area. Visit the Ranger Station in Leavenworth to obtain one. Camping is prohibited at the trailhead, but the Bridge Creek Campground on Icicle Road is a great place to car camp (outhouses and well water provided. Fee required.)

When to climb basically depends on what you have on your feet. Good spring ski touring and snowshoeing can be had into early May most years. The main route is mostly snow-free for hiking by July, with the exception of the north slop below the scramble section. 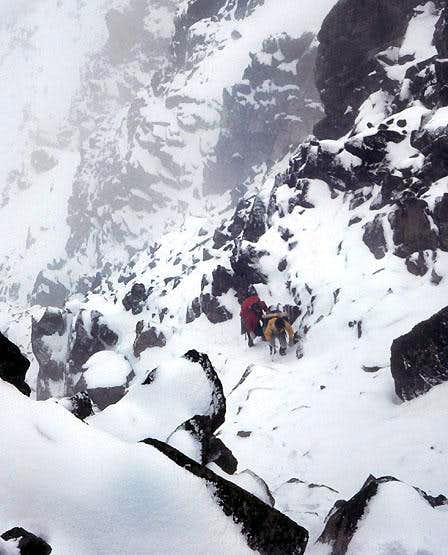 The West Ridge In Winter Conditions 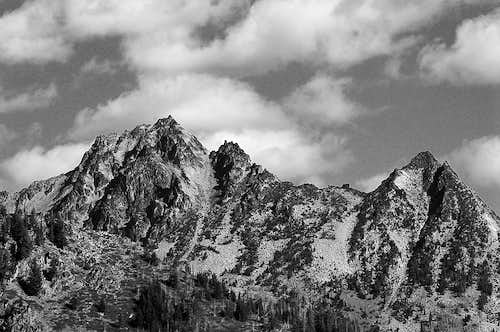 The Main Peak And East Peak

For climbers/hikers seeking a relaxing night or two before or after climbing Mt. Cashmere, there are several lodging options in Leavenworth. Here are a couple recommended places:

Cashmere Mountain was one of several sites considered for a new Deep Underground Science and Engineering Laboratory (DUSEL) for basic research in physics, astrophysics, earth sciences, microbiology, and engineering. A strong opposition from Leavenworth residents was formed. In a July 21, 2005 press release, the National Science Foundation announced that Homestake and Henderson Mines were the two sites being considered further, effectively dropping the Cashmere Mountain site from the list of proposed sites. 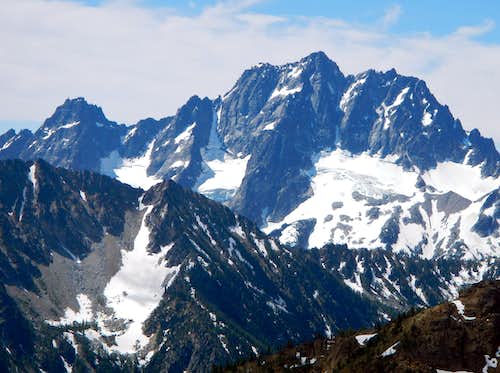 The view of Sherpa Peak and Mount Stuart

More information about the DUSEL project and debate can be found in the following links: