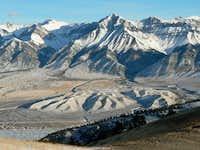 When viewed from the south, Lost River is quite distinguishable and characterized by the very defined “Super Gully” which carves its way up the southwest face of the mountain to a distinct point. However, a profile view from the east or west reveals that the summit is not made up of a single point at all. Instead, there is a ridgeline running from the false summit, which is the point visible from the south, northward for couple hundred yards to the true highpoint. From here the ridge drops a couple hundred feet or so, then rises again to a more complex and seldom visited northern summit. When viewed from the north, Lost River Peak can be seen as a complex series of ragged ridges and folds with no obvious route to ascend. However, committed scramblers can access the summit via the Dry Creek drainage and “one of the most challenging routes in the range” (Lopez pg. 283).

Below are driving directions to the start of the most commonly used southern routes, including the Super Gully.

There are no fees or permits required. Just observe any signs posted by local landowners and make sure to leave the gates as you found them during the drive to the trailhead.

There have been winter ascents of this mountain, but it is typically climbed from mid-May (after avalanche danger has lessened) through September or whenever the snow flies. The earlier in the season you climb, the less scree you will face. A great early season snow climb is popular via the super gully.

The summit register on top of Lost River Peak reflects the majority of climbers arriving in late summer; with a fair amount of others making snow climbs in June.

Camping is allowed at the trailhead, where you’ll be able to pitch a tent or two amongst the sagebrush. There may be water coming down the nearby gulch early in the year, but it generally dries up in early June or sooner.

The nearest improved camping is at Mackay Reservoir which has a tent camping area and good facilities (Picnic tables, fire ring, water, toilet.)

Unlike many Idaho mountains, there is actually a fair amount of information available for Lost River Peak.

There are at least two guidebooks that contain information on the Lost River Peak.

Here are links to a few detailed trip reports for Lost River Peak.

If you’re aware of other external links, just let me know and I will post them here.