The Breithorn range stretches aligned West-East along the border ridge between Italy and Switzerland for about 2.5 kilometers. It is not a single peak, but it's actually made up of five peaks connected by a thin and long ridge wire which makes up the Western end of the still more massive frontier crest stretching from Monte Rosa, over the multiple summits of the Liskamm Group, and past the twin peaks of Castor and Pollux. Starting from the west and going east we meet at first the Breithorn Occidentale (4165 meters, 13,665 feet), which is the highest summit, the Breithorn Centrale (4160 m, 13,648 feet), the Breithorn Orientale (4141 m, 13,586 feet), the Breithornzwillinge or Gemelli del Breithorn or Punta 4106 (4106 m, 13,471 feet) and the Roccia Nera (4075 m, 13,369 feet). All summits are in the list of the UIAA. Check here the complete list of the 82 alpine Fourthousanders and the 46 minor summits: Club4000.

If it were not for the Klein Matterhorn cable car, which whisks climbers and skiers up to over  3800 meters, the Breithorn would be a long climb by any route. But the lift has turned the SSW Flank route on the Breithorn Occidentale, which is the closest summit to the cableway arrival station, into one of the most climbed 4000 meter peaks of the Alps. This is a snow and glacier route and the most attended itinerary of the entire Breithorn chain. The primary challenges are those ones usually associated with high altitude climbing, that is fitness, pace and basic crampon technique. In poor weather, or when avalanche hazard exists on this side of the peak, the climb takes on another character. Most of the time, however, this route offers an enjoyable outing with incredible views and a rewarding summit.

The Breithorn chain offers a complete range of all types of ascents and difficulties. Among the most classic routes there are the North ridge of the Breithorn Occidentale, the Young ridge of the Breithorn Orientale and the Breithorn Traverse. The long Breithorn range has two distinctly different opposite sides. The Southern side shows short snowy walls under which the slightly steep slopes of the Plateau del Breithorn and the Grande Verra Glacier unfold. Instead the severe Northern side opposes high and complex rock and ice walls overlooking the Breithorngletscher and further down the Gornergletscher. 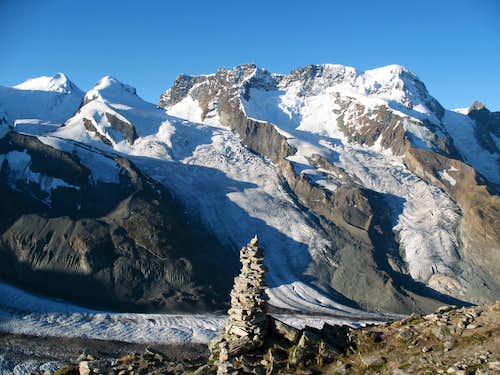 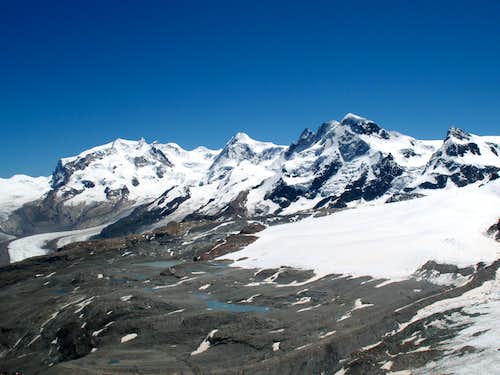 VIEW FROM THE HÖRNLIHÜTTE TOWARDS MONTE ROSA & BREITHORN

Located in southern Switzerland at an altitude of 1,600 metresand just a few hours from the international airport of Zurich, Generva and Milano. Zermatt easily accessible from western, northern or southern Europe.
International rail connections link up to Brig with the modern narrow-gauge Zermatt railway, which takes only 90 minutes to climb through the Visp Valley.
Motorists can drive as far as Täsch, from where trains (shuttle trains run every 20 minutes) and minibus taxi operate a shuttle service for the remaining 4.8 km/3 miles to Zermatt. Low cost parking are available in Täsch, as well as in Visp.

The Breithorn range has five summits. All summits are in the list of the UIAA. 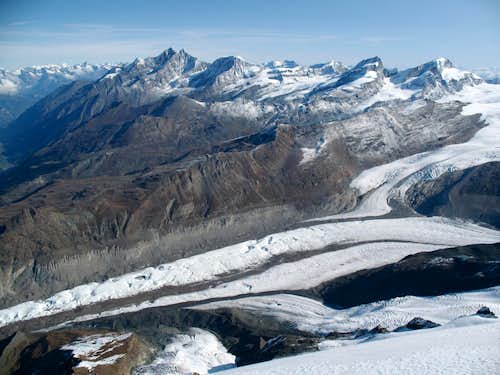 View from the main summit towards Mischabel 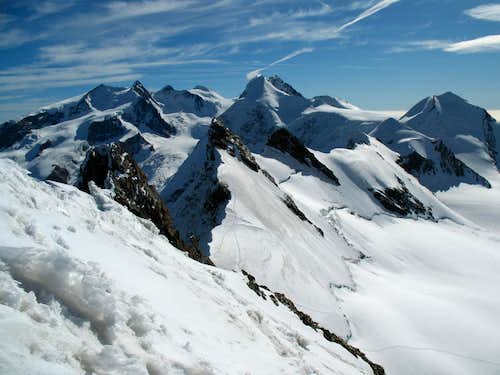 View from the Central Breithorn towards Monte Rosa

The normal route, the SSW Flank, is an easy climb on 35 degree snow or ice. It is accessible by cable car, and therefore makes an enjoyable day climb for training and acclimatization. It also affords incredible views.
The north face of this mountain - 1700 m high - is by contrast rather impressing and the ascent is rated AD like Matterhorn.

The Half Traverse of the Breithorn Crest is almost 3 kilometers in length. The climber normally gain the crest at about the halfway point at col 4022m. From here you have to climb over the 3 main rocky steps, very exposed but never extreme. The traverse ends with an easy corniced ridge to to highest summit at the west end.

You can climb this summit from Bivacco Rossi e Volante

From Champoluc, fraction St. Jacques, reach Blanchard hamlet and then take the path CAI n. 7. After a small bridge, the trail leads through the woods, passes a clearing in the woods and into the wood again until converging with the dirt road (closed to vehicles) coming from Saint-Jacques. Cross the Pian di Verra Inferiore, after which the signposts indicate the Blue Lake and on the right Rifugio Mezzalama and Rifugio Guide Val d'Ayas. After crossing the bridge, we follow the path which cuts the curves of the road then along the river we enter a valley that leads to the Upper Pian di Verra. Shortly before, indicated by two signs, the trail branches off to the left and up the steep slope that forms the other side of the moraine of the glacier. The trail passes along the edge of the moraine in sight of Refuge Mezzalama, then it appears also the higher Rifugio Guide Val d'Ayas. Yet following the moraine reach the Refuge Ottorino Mezzalama 3004 m.

Rifugio Teodulo is situated about 1 hour above Gandegghütte. If you approach the hut from the Swiss side follow the route to Gandegghütte. Climb the rock ridge / middle moraine south of Gandegghütte and follow the ridge and right / west of it until you reach the Theodulgletscher. Follow Gandegg ski lift track until you arrive below Theodul col. Go right and ascend steeply to the col. Some more steps bring you up to Rifugio Teodulo.

The approach from the italian side starts at Breuil-Cervinia and uses the cable cars os the trails and mountain roads via Plan Maison to Colle Teodulo and the mountain hut.

Access: From the Rifugio Guide Valle d'Ayas to Lambronecca with about 1.30-2 hours on the glacier (difficulty F)- required rope, ice ax and crampons

Access: From Zermatt railway station follow Bahnhofstraße and Oberdorfstraße to the cable car station Zermatt – Furi. Stay right and follow the trail, direction Zmutt (signposts for Gandegghütte) until you can cross the Zmutt creek on a foot bridge left of that trail (again signposts Gandegghütte). Ascend to the Alp village “Zum See” and to “Hermetji". After Hermetji inn a trail branches off to the left in the direction to Furgg. Cross the ski run below Furgg and follow the trail, marked again Gandegghütte. Beautiful view of Matterhorn. The trail climbs the moderate grade slopes up to cable car station Trockener Steg. At a trail junction go straight on (to the right you will reach Trockener Steg), pass by a small lake and arrive at Gandegghütt

Breithorn at www.4000er.de
Images, routes, coordinates and more information about the highest peaks of the Alps Photo Breithorn from Gornergrat