Kopica is standing like a huge nugget on the long mountain crest above the Valley of Triglav Lakes. Its shape is so characteristic, that it is recognisable from all sides. Its compact SE wall is falling down on the ridge, which runs towards Tičarica and also down towards the Valley of Triglav Lakes. I heard that locals did one or two hard climbs there, but I have no detailed information about them. For the majority of mountaineers Kopica is so a hiking mountain. The marked path, which crosses the whole ridge, ascends very high below its summit, so it is visited by people, who are hiking up or down the valley Za Kopico (=Behind Kopica).

The view from the summit is specific and nice. The most attractive is to look down on blue eyes of Triglav lakes. Beyond the valley a vast Komna plateau stretches and from the summit of Zelnarica you can see all mountain chains above it: The Lower Bohinj Chain, Veliko Špičje chain and in distance the Krn group. Towards the other side the view is a bit obscured with other, a little higher mountains of the Bohinj group: Vogli, Debeli vrh, Vršaki.

1. From the upper part of the Valley of Triglav Lakes. Either ascending by the valley, coming from Prehodavci hut or descending from Hribarice we must reach the crossroad on half of the slope towards Hribarice. There we turn southwards, cross the slope below Vršaki, ascend to Vrata, 2192 m (the saddle between Zelnarica and Zadnji Vogel) and from there either go over both peaks of Zelnarice or continue by the valley and ascend the summit ridge later. From the Koča pri Triglavskih jezerih (hut) some 3 h 30 min, from Zasavska koča na Prehodavcih 2 h 30 min. The path is marked, but on several parts steep and unpleasant (screes).

2. Through Za Kopico valley. This valley, running parallelly with the Valley of Triglav Lakes is very different from the latter. It is dry, no water source can be found there and on both sides the slopes are only moderately steep. Below, it begins on Dedno polje alpine meadow, 1560 m. This nice pasture can be reached from many sides. There four paths are crossing: from the west comes the path from Ovčarija pasture (and from the valley of Triglav Lakes), from the south comes the path from Planina Jezero (there's a mountain hut), from the east comes the path from Planina Laz and towards north goes a path into Za Kopica valley. So, from Dedno polje we first ascend over a steeper lower part of the valley, until we pass Kovačičeva glava and reach a small basin between Tičarice and Vogli. We continue towards NW, pass the flat part and start ascending moderately again. The valley gets the northern direction and becomes more and more narrow. Here we turn left (no path) and over a rugged terrain (but no difficulties) ascend towards the summit of Kopica. Soon we hit the upper path and go by it to the summit (by the northern ridge). From Planina Jezero hut 2 h 15 min, from the parking place at the end of the Suha road 3 h 30 min, from Bohinj valley (Stara Fužina) some 6h+. This is also a nice ski tour. Only the summit slope is quite steep and requires a careful ascent/descent when snow is hard or slopes are icy. As an interesting combination, see also the Tour around Za Kopico valley.

3. From Koča (hut) pri Triglavskih jezerih. If you are in the Valley of Triglav Lakes, you can ascend Kopica also from south. From the hut go up the scree (towards E) to Štapce notch, 1851 m, then proceed N towards the summit of Mala Tičarica, pass it on the E side and follow the marked path below Velika Tičarica to Kopica. From the hut 2 h 30 min. Easy, marked path, only before Štapce notch there is a short vertical wall to overcome (pegs, steel ropes). 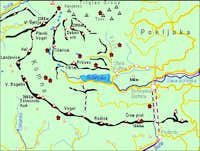 On the map left you can see that all roads end in the Bohinj valley.

> The mountaineering trail for the Valley of Triglav Lakes starts at Savica, 653 m.
> The trail for Planina Jezero starts in Suha valley, 1150 m or below in Voje, cca 700 m.

Kopica stands in the Triglav National Parc. So, please do everything to preserve nature! Almost all parking places around Bohinj lake need to be paid. Also the road through Suha valley needs to be paid.

For ascents and more details see the Bohinj Group page.