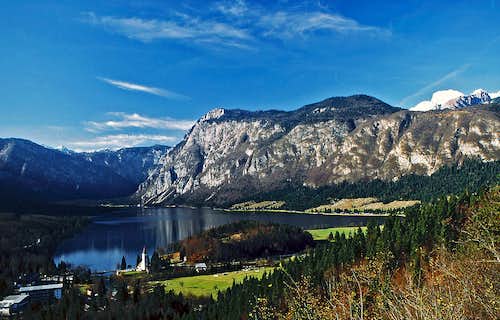 Pršivec from the eastern shore of Bohinj lake 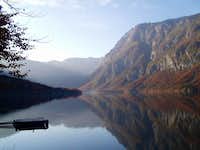 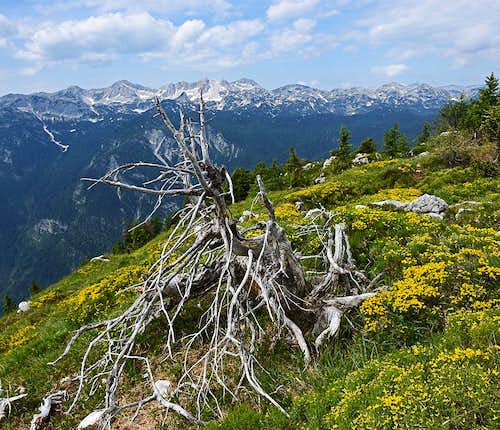 North of the romantic Bohinj lake a broad mountain rises more than 1200 meters high. This is an old, dormant guy, because of low absolute altitude only its head is peeking out of immense forests, lying on its northern side. But, contrary to other Julian Alps summits, its south slopes are very steep, grassy and rocky - luckily, because everyone is really looking on this mountain from the popular lake.

Because its position right in the centre of Bohinj's world Pršivec offers a very nice panorama. Towards the north broad forests and the highest Bohinj Group summits, towards the west the broad romantic plateau of Komna, almost half of the whole horizon towards the south is occupied with the South Bohinj Chain and towards the east we can see the rest of Bohinj valley and the Pokljuka plateau above it. But perhaps the most attractive view is not on far distance. Deep below us lies Bohinjsko jezero, the biggest permanent lake in Slovenia.

One of consequences of karstic nature of the mountain is also abundance of caves in the area. Some of them are very deep, but the overall depth potential can not be bigger than the overall difference between the summit and plateau area and the level of Bohinj lake. The caves are hard to be visited and requre specific knowledge and equipment. The most known is Jama pri Gamsovi glavici. Its entrance is on 1609 m, the length of passages is around 6 km in the depth 817 m, which qualifies it to the 10th place in Slovenian mountains. The other such cave is Majska jama, which we pass en route from Viševnik meadow to the summit. Just 130 meters above the level of Bohinj lake, after heavy rain from Pršivec slopes an intermittent waterfall can be seen. The quantity of rain water must be big enough to fill the big cavern system, which goes even down below the lake level. Strictly speaking this is even not a waterfall, but an interesting valve for Pršivec karst holes system. The burst of Govic is very rare, but spectacular. Otherwise the entrance to the waterfall cave can be visited by ascending a dry ravine from the lake shore.

The shortest ascent starts on the parking place by Koča pri Savici (hut), 653 m. This is the path over Komarča slopes, to Črno jezero, Viševnik pasture and then on top.

The eastern approach starts at Stara Fužina, 546 m, or on the parking place just north of it, 600 m. This is the approach over the Vogar alpine meadow. But this meadow is reachable also by the road through Suha valley. So, from Stara Fužina you drive further into Voje valley and left into the side valley of Suha. A bit before the end of the valley there is another crossroads, where we drive left to Vogar. The mountain road goes over the meadow and further on, far towards Pršivec. The last parking place is now (2013) on 1350 m. Till there, you can do a good tour also by mountain bike. And then just jump on top. From the end of the road into Suha valley (Planina Blato) you could go also over Planina pri Jezeru on Planina Viševnik and further on top. In the summer season the road to Suha valley must be paid (in 2018: 10 EUR).

For northern approaches on Pršivec you must cross Bohinj Group, so they can not be done in one day and Pršivec is only the secondary goal.

All the three below described routes are not difficult hikes. The easiest (by the Swiss Hiking Scale) is the route from Blato meadow, the shortest is the route from the end of the mountain road above Vogar meadow. That one has the last section of hiking difficulty T3, and also the route #1 (over Komarča wall) has some exposed and protected sections of difficulty T3. For all routes good shoes and eventually poles is a sufficient gear.

From the hut you go north towards the Valley of Triglav Lakes. First the marked path steeply ascends over Komarča walls. On some places the path is exposed and protected with steel ropes and pegs. In 1 h 45 min you reach the top and behind the edge you find Črno jezero (Black Lake), 1294 m. Here you turn by the marked path sharp right (towards the east). By a shallow valley you ascend through forest and in 1 h reach the beautiful Viševnik alpine pasture, 1615 m. Here you turn riht again. A marked path leads you towards the south. Soon it branches and there you take the right branch and in another 30 min reach the highest point. Altogether 3 h 15 min to 3 h 30 min. Marked path, steep and exposed over Komarča wall, but no serious problems. Not recommended in winter until the southern slopes of Komarča are free of snow. In winter you will rarely find tracks to Viševnik and further on, so you must go on skis.

From the village you go by the road into Voje valley. 2 km north of the village the marked path deters left (westwards) and takes you by a rough, paved path on Vogar alpine meadows, 1054 m. This path was in the past more in use, today it is quite deteriorated. Interestingly, it does almost the whole slope in only 3 long turns. Reaching the lower meadows of Vogar, it is worth going left, on the edge above the lake. Beautiful view from there! On Vogar there is Kosijev dom (hut), which can also be reached in 15 min from the road through Suha valley (pay toll!). On Vogar it is also worth mentioning the beautiful lookout point on the edge above the lake - only some 5 minutes from the hut.

From Vogar you go further in the western direction and allways keep left. The marked path goes beautifully by the edge, higher and higher above Bohinj lake, paralelly to the mountain road. From the last parking place on this road (2013), you continue westwards. The marked path first ascends gently through the woods, but in the last 30 min the ascent goes over steep grassy slopes, so take care if it's slipery or snow on the trail. One passage is exposed and protected (cable). From Stara Fužina altogether 4 h.

After the mountain road through Suha valley branches (left branch goes to Vogar and further to below Pršivec), the right branch ends just below the alpine meadow of Blato. Just from before the end of the road you take a marked cart-road towards Planina pri Jezeru. On the next branching we go left (the right branch goes on Planina v Lazu) and continue westwards. The comfortable marked path crosses some steep slopes (some care needed there in winter), before the distinct rock barrier ascends more steeply towards the left and above the end of a shallow valley we just need to go around the overgrown hill to reach Planina pri Jezeru. From this nice alpine meadow the marked path to Viševnik meadow branches from the main path towards the left (towards the SW) and in some 30 minutes reaches Viševnik meadow. From there on top as described under #1. In deep winter The summit of Pršivec is best done with skis. Generally skiing is not very fine, but if there's a lot of snow it helps you to get down in Bohinj quickly. The map above can give you some ideas if you wish to accomplish the ascent on Pršivec if coming from the north. In forests north of Pršivec, don't go without a good map!

The mountain is in the Triglav National Parc, otherwise no limitations. The road through Suha valley needs to be paid (not in winter, when it's not cleaned).

It's worth visiting Pršivec any time of the year. Either if it's high hiking season, or if you want the deepest winter solitude. Either if you are coming to admire flowers, blossoming in spring, or if you are coming to see burning golden autumn larches. The tour on Pršivec has nothing to do with mountaineering bravery, but it's fine because of the special feeling of nature up there. For weather see here. Even better site is wunderground - here's the direct link to Kredarica station, 2515m (below Triglav summit). 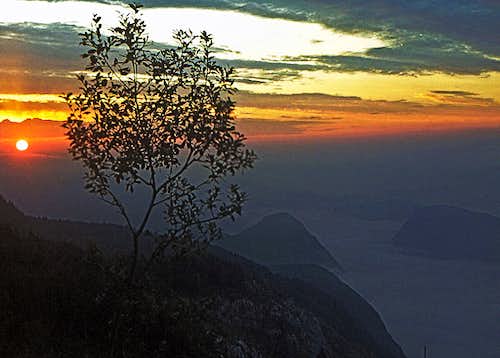 Camping in the national parc is not allowed, but high on the mountain you will not be bothered if you make it throug a night.

Your Contribution Is Welcome

Please add information on this page, especially of the following: