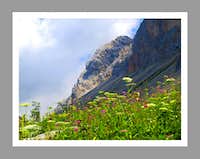 LeonardoDj - In the Valley of Triglav Lakes

General remark: (When reading Slovenian words on maps or in books, you will find special characters for ch, sh, and zh. They are written with c, s and z with a caron - little v above them.). Tičarica is pronounced Ticharitsa.

In the long mountain crest above the Valley of Triglav Lakes the double summit of Tičarica is the first, the lowest of more important summits. Even more towards the south and south east some less important summits stand, which due to remoteness and broad 'plantages' of pine-bush are only rarely visited. As said, there are two summits of Tičarica, Mala (Small), 2071 m, and Velika (Big, High), 2091 m. By some natural laws only the Mala Tičarica is often ascended. There the marked path ends and no one continues by the more difficult ridge to the higher Velika Tičarica. Also from the marked path, which goes across the eastern slopes below the whole crest towards Kopica, Velika Tičarica can be ascended only by an easy, but not very pleasant climb.

Tičarica is a 'home mountain' of Koča pri Triglavskih jezerih (hut). With its vertical west wall it is leaning just above the so popular hut and only 400 meters of altitude difference are a good guarantee, that the summit is often visited. Sometimes it is the first summit, when in the morning we go further from the hut, either up, to the higher regions of the Triglav and Bohinj massif, either down, descending into Bohinj valley. Sometimes Tičarica is the last summit of the day, when we reach the hut and still have time and energy to go up and spend a nice evening on the panoramic summit. Climbers in Tičarica's west wall are more rare, although in past rutes there were more often done. For them Tičarica can be an objective of the day.

Mala Tičarica is also a nice mountain for tour skiing. The skiing is rarely done down into the Valley of Triglav Lakes. There's a rocky step and when we are down by the hut, skiing directly down into Bohinj valley is also not possible. The most beautiful ski tour goes down to Dedno polje and further down to Planina Jezero, Suha valley and Bohinj.

The panorama from the summit of Tičarica is very fine. On one side are the higher mountains of Bohinj Group and Triglav massif, on the other side we have an all open view towards west and south, where in the distance tho whole South Bohinj Chain and Krn Group can be seen. And, also very attractive, just below us are the smaragd-coloured Triglav lakes.

1. From the Valley of Triglav Lakes. From the hut we immediately start ascending over broad screes towards SE. We quickly gain altitude, our route is aiming the part, where the mountain chain above as has the lowest walls. Where Tičarica south ridge lowers most and where screes reach highest, there's a notch, called Štapce. But even there the passage is not just simple. Over a few meters of rocks steel cables and pegs help us. Reaching the plateau above, we simply continue by Tičarica's south ridge to the summit of Mala Tičarica. 1 h 15 min from the hut.

If we want to ascend also the highest summit (Velika Tičarica), we continue by the marked path, which goes on the eastern side below the summit of Mala Tičarica until we are below the summer of Velika Tičarica. leave the path there, ascend through pine-bushes, scramble over steep slopes into a distinctive ravine. In the upper part of the ascent you will need to climb a few places (UIAA I+), the ascent gets more and more airy, but also the summit is close. You will reach it without bigger problems.

2. Through Za Kopico valley. This valley, running parallelly with the Valley of Triglav Lakes, is very different from the latter. It is dry, no water source can be found there and on both sides the slopes are only moderately steep. Below, it begins on Dedno polje alpine meadow, 1560 m. This nice pasture can be reached from many sides. There four paths are crossing: from the west comes the path from Ovčarija pasture (and from the valley of Triglav Lakes), from the south comes the path from Planina Jezero (there's a mountain hut), from the east comes the path from Planina Laz and towards north goes a path into Za Kopica valley.

So, from Dedno polje we first ascend over a steeper lower part of the valley, until we pass Kovačičeva glava and reach a small basin between Tičarice and Vogli. There we continue westwards (no path) and ascend over the open landscape towards Mala Tičarica. Slopes are easy, in winter these are nice slopes for tour skiing. For Velika Tičarica, see the second paragraph of #1 above. From Planina Jezero hut 2 h, from the parking place at the end of the Suha road 3h, from Bohinj valley (Stara Fužina) some 5 h+. This is also a nice ski tour (Mala Tičarica, of course).

Harder climbs in the west face

For a broader overview see the Bohinj Group page and the Julian Alps page!

On the map left you can see that all roads end in the Bohinj valley. The mountaineering trail for the Valley of Triglav Lakes starts at Savica, 653 m, the trail for Planina Jezero starts in Suha valley, 1150 m or below in Voje, cca 700 m.

Tičarica stands in the Triglav National Parc. So, please do everything to preserve nature!

Almost all parking places around Bohinj lake need to be paid. Also the road through Suha valley needs to be paid. 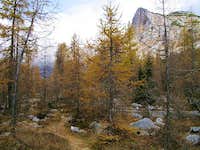 Tičarica can be ascended in almost all seasons. Only in hard winter condition the ascent is not recommended. So, in snow-free times the best months are June to October in times of tour skiing February to May.