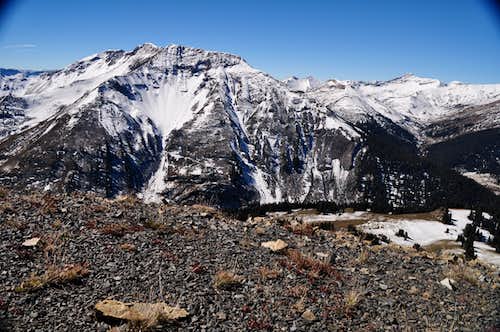 Note: Although Mount Baldy sits outside the wilderness boundary It is close enough and shares so many attributes with the mountains in the Raggeds proper that I feel the need to describe it as part of the Raggeds Wilderness.

The Raggeds Wilderness is a unique and exciting country resplendent with rugged peaks, gothic cliffs, and colors that strain perceptions. This is the land where purple, maroon, grey, and shinning white rocks rise above alpine carpets of lush iradescent green and vast tracts of gigantic aspen. Reminescent of the landscape of the nearby Maroon Bells-Snowmass Wilderness the Raggeds Wilderness offers a less crowded alternative. In spite of the similarities the Raggeds are distinctive. Three geologicaly different sub-ranges of the mighty Elk Range compose the Raggeds Wilderness and this topographic variety gives the region a distinctive flair. Set amongst this mountain splendour are scenic showcases of geological wonder. Features like The Grand Dyke, Dark Canyon, and Oh-Be-Joyfull Basin delight the eye.

The Raggeds Wilderness was designated in 1980 and contains 65,019 protected acres. It is located 11 miles west of the town of Crested Butte. It is bounded on the east by Schofield Pass, on the south by Kebler Pass, on the west by Colorado Highway 133, and on the north by the Crystal River. Within these confines the Ragged Range occupies the northwestern part of the wilderness with soaring and appropriatly ragged ridges of Tertiary intrusives. The highpoint of the Raggeds is 12,721 ft. tall Chair Mountain. The central eastern portion of the wilderness is occupied by the twin massif of 13,462 ft. Treasury Mountain and 13,528 ft. Treasure Mountain. This huge dome of layered marine shales is sculpted with five majestic cirques that drop off the north east of the mountains. Treasure Mountain is the highest point within the Raggeds Wilderness. Herein I refer to the massif as The Treasures. The south eastern section of the wilderness contains the seven mile long Ruby Range. This linear range of stratified Pennsylvanian aged sediments lives up to its name. From Purple Mountain near Yule Pass to Ruby Peak this line of summits stands as a colorful encore to the higher Maroon Bells to the east. The highpoint of the Ruby Range is 13,058 ft. Mount Owen. 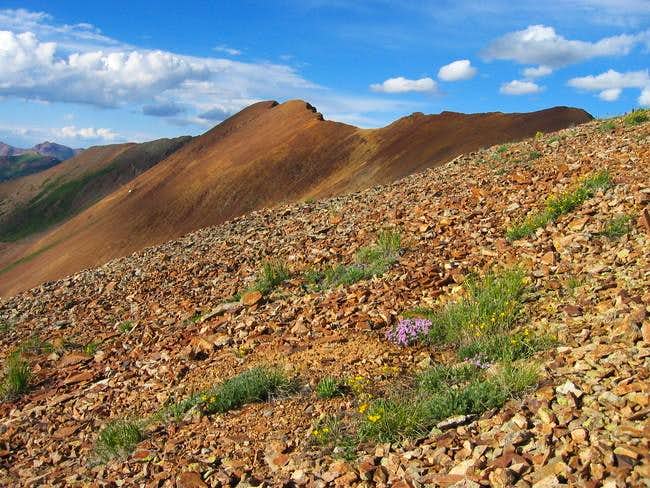 Mount Baldy is a russet colored ridge of a mountain that has character belied by its mundane nomenclature. It is nominaly part of the Elk Mountains, and indeed it forms a mountainous link between the well known summits of the Elks and their more obscure bretheren in the Ruby Range. It consists of a mighty ridge that seperates Schofield Pass and Paradise Divide and sits in legal limbo between the incredible Maroon Bells-Snowmass Wilderness and the rugged and secretive Raggeds Wilderness. Baldy is a great mountain which truely deserves a more descriptive and appropriate name.

The route on Baldy begins at Paradise divide and showcases the scenic ridge run that this mountain offers. Even though this is a relatively easy mountain it offers glimpses into difficult terrain in all dirrections. The views of the Elk Range Fourteeners are in particular very fine. The terrain is reminescent of the Ruby Range but the looseness of the rock is not an issue as long as you follow the ridgeline. This is a fun mountain requiring very little commitment. All told though it provides rewards far in excess of the effort required.

The aesthetic pleasures of this mountain likely garnered it a "classic peak" designation from Gerry and Jennifer Roach. Indeed their information on this summit grabbed my attention when I was planning a trip to Paradise Divide and resulted in my partaking a summit I may have otherwise neglected. 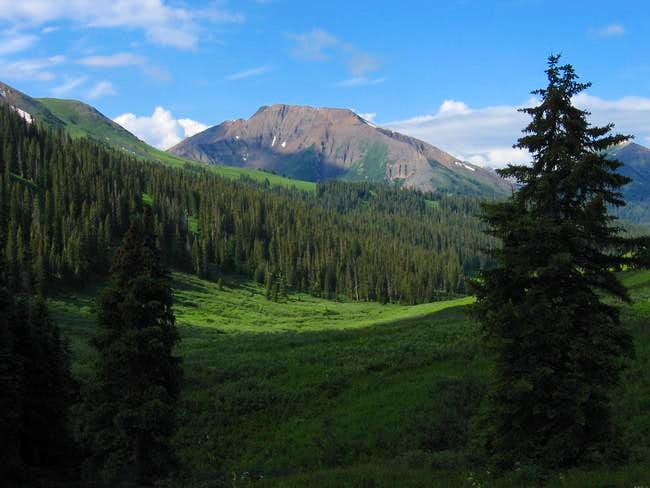 To get to the Paradise Divide Trailhead go north on Colorado 135 from downtown Crested Butte. Four miles after the end of the pavement pass through the town of Gothic and continue north to Schofield Pass. From this 10,707 ft. Pass turn left (west) onto the Paradise Divide Road follow this to on obvious high saddle with a couple small tarns and rolling hills dotted with small stands of pine trees. Paradise Divide is at 11,320 and the Yule Pass Trail heads north west from the road towards Yule Pass two miles distant. 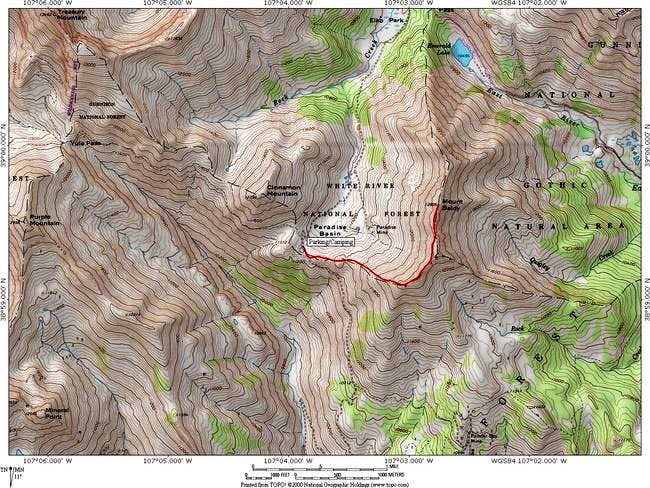 Topo of Mount Baldy and the Paradise Divide area. West Ridge Route is drawn in red.

West Ridge: 3.5 miles, 1,725 ft elevation gain, class 2
The West ridge Route on Mount Baldy begins at scenic Pardise Divide. From parking near the small tarn that graces the divide hike east through sparse trees and rolling hills. Soon you come to the routes crux. The first slope encountered above timberline consists of some loose and scruffy scree (typical Elk fare). Their is a use trail that winds though this stuff and after 200 feet it becomes much less tedious. From here continue up the ridge to the first false summit. From here the remainder of the route is obvious and quite enjoyable. The ridgewalk offers expansive views into the main body of the Elks to the east and the Ruby Range to the south west. Point 12,700 is an intermediate false summit that can be either bypassed on the west side or ascended along the way. The true summit is the double hummped point at the north end of the ridge. Once there try and linger to soak in the spectacular views.

The view of the summit ridge on Mount Baldy. The summit is the highpoint on the left. The Crested Butte section of the Elks, consisting of Whiterock Mountain, Precipice Peak, Teocalli Mountain, and Avery Peak (identifiable by the spotches of red), are visable across the valley.

Wilderness regulations apply. The northern section of the wilderness is administered by the White River Ranger District. Contact information is as follows:

The southern section of the wilderness is administered by the Gunnison Ranger District. Contact information is as follows:

Please leave no trace in this special place. Pack out everything you bring in. Keep dogs on leashes. Minimize impact as much as possible.

The Raggeds Wilderness, being perched on the western edge of the famously snow draped Elk Mountains, gets a deep mantle of snow that can make the region impassable from late October into June. The approach may not be feasible due to road closures during these months. In June and July the mountain may be accesible but dangerous avalanche slopes are encountered around Cinnamon Mountain. The summit ridge in particular would be dangerous with a deep covering of snow. Difficulty would be dramaticaly different and an ice ax and crampons would be mandatory. The possibility of cornices extending over the cliffs of the east face should demand caution. From late July through September runs the prime season for Baldy.

For a detailed seven day forecast for the nearby town of Crested Butte CO please click the provided NOAA link.