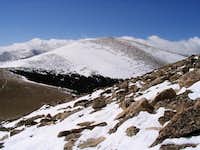 It's gentle slopes do nothing to attract technical climbers and being just over 12,000 ft makes it easy for peakbaggers to overlook.

Saint Vrain Mountain sits quietly on the border between the 265,828 acre Rocky Mountain National Park to the north and the 76,586 acre Indian Peaks Wilderness to the south. Due in part to the taller, better known mountains of the area, St Vrain often goes without being noticed. This solitude and the wonderful views from it's summit is what makes this mountain worth climbing.

The Wild Basin area in RMNP to the north is home to some of the parks most famous peaks, including Chief's Head, Pagoda, Meeker and the best known, Long's. The Indian Peaks are home to popular peaks such as Audubon, Sawtooth, and Elk Tooth. All these mountains and many more can be viewed without obstruction from St Vrain's summit.

In the summer St Vrain provides a straight forward hike through beautiful trees along a small creek, followed by a substantial time above treeline walking (Class 1-2) over tundra. There is a trail until you reach the East Slopes proper of St Vrain, at which point you leave the trail for the summit. The trail is also the primary access to neighboring Meadow Mountain, which can be climbed with an additional 0.75 miles and about 400 ft added to the roundtrip total.

St Vrain also makes an excellent winter climb, as the standard route holds minimal avalanche danger. During winter, one might encounter numerous skiers enjoying the powder in the bowl and trees below St Vrain's saddle with neighboring Meadow Mountain.

Getting To The Trailheads 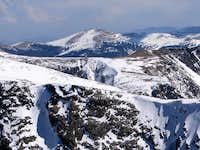 There are two THs for climbing St Vrain. The most commonly used is the Mount Saint Vrain TH and the other is the Middle Saint Vrain TH.

This TH is located near 8900 ft just outside of Allenspark. Allenspark is on CO 7, 3 miles north of the junction with the Peak to Peak Highway (Colorado 72). When coming from Estes Park, follow CO 7 for 15 miles south to Allenspark.

Once you get to Allenspark locate the signed Ski Road in town and follow it south for about 1.5 miles to a junction. At the junction, take a right past a sign indicating that the TH is 0.5 miles further up the road. There is parking at the TH and along the road for several cars.

The road is passable to all cars in summer. In winter, 4x4's can usually make it to the junction that is 0.5 miles from the TH, adding about 1 mile roundtrip.

This TH is located just west of Peaceful Valley and Camp Dick on CO 72. To get there, follow CO 72 for 4 miles south of the CO 72 and CO 7 junction. When approaching from the south it is located about 6 miles north of the small town of Ward.

The actual TH is located just over a mile west on the Middle Saint Vrain Road at an elevation of about 8700 ft. A very rough 4x4 road continues on for another 4 miles to the Indian Peaks Wilderness Boundary. High clearance and lots of patience are a must for this road.

No permits are required for normal day use of this area. Overnight camping does require a permit from June 1 thru September 15, but not during any other time. The permit is $5 and the application can be found here. The permit can be obtained in person at either the Boulder or Sulphur Ranger District Offices or by mail. When applying by mail, allow at least two weeks for delivery.

The hike in is within the Indian Peaks Wilderness Area and all wilderness rules and regulations must be followed. The route flirts with the RMNP border on the upper slopes meaning that park rules will apply beyond that boundary.

Also the Indian Peaks Wilderness Alliance, a non-profit organization dedicated to preserving the area, has information here on their site. 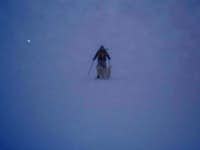 The easiest climbing conditions for St Vrain are most likely found starting in late May until the first major snow of the year. However, those looking to stretch their off-season legs will find a much more difficult, although extremely enjoyable, hike during the winter months.

During winter be prepared for extensive snow travel and possible avalanche danger. Check the conditions and have the appropriate gear.

Camping is allowed in both National Forest and Wilderness areas. As stated previously, camping is by permit only between June 1 and September 15. See the Red Tape section for information on permits and regulations. During this time strict regulations are in place to preserve the area.

During the rest of the year, when most of the area is blanketed in snow, no permits are required. However, campers should still follow the Leave No Trace policy. 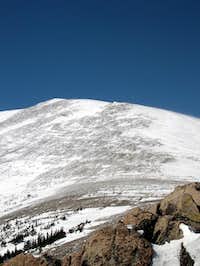 The University of Colorado has a Mountain Research Station located on Niwot Ridge in the IPW, just south of St Vrain. Their site is helpful with current weather conditions for the area. The interactive tundra cam is very cool!