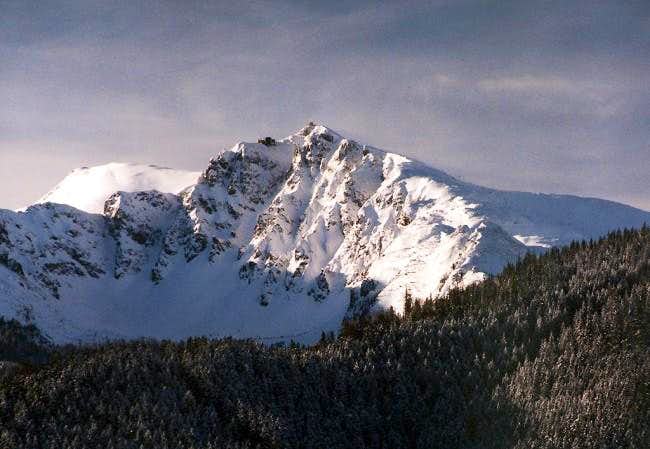 Kasprowy Wierch - North Face Kasprowy Wierch is a peak that rises in the main ridge of the Tatras on the Polish-Slovak border almost in the very centre of the Polish Tatras. It is surrounded by the valleys: Dolina Stawow Gasienicowych on the east, Dolina Goryczkowa on the west, Dolina Kasprowa on the north, and (in Slovakia) huge Ticha Dolina valley on the south. There is a meteorological observatory on the summit (1985 m), and slightly lower than the summit is the top station of the cable-car from Kuznice. Kasprowy Wierch is the starting point for a number of mountain trails and climbs. In winter it is the principal ski centre. There are very fine runs from the summit, in several directions.

Getting to Kasprowy: There are numerous routes that can be taken to reach the summit. The most popular route that I recommend is going from the side of the valley (Hala Gasienicowa) which offers a beautiful hike through the valley and offers a walk along the mountain ridge once you climb the valley's steep wall. Walking down the ridge offers the opportunity to cross over to Slovakia because the ridge is located right on the border. In Goryczkowa Valley
From Kasprowy Wierch there are several marked trails: The red one leads to Swinica Peak(2301 m - approx. 2 h), and then as the Orla Perc (Eagles' Path), along the mountain ridge towering over Hala Gasienicowa in the south. About 1 hour from Swinica we come to a famous saddle of Zawrat Pass (2159 m), from which one descends, following the blue trail, to Hala Gasienicowa on the north, or to the Dolina Pieciu Stawow Polskich (Five Polish Lakes Valley) in the south. The yellow trail from Kasprowy leads down to the Hala Gasienicowa (about 0.45 h) and then to Zakopane (approx. 2 h). The green trail follows the ridge between the Dolina Kasprowa and the Dolina Goryczkowa, as far as Myslenickie Turnie, and then drops down to Kuznice (descent - approx. 2.30 h). The red trail, holding to the main ridge of the Polish-Slovak border, leads from Kasprowy to Czerwone Wierchy (approx. 2 h).

In Tatra National Park the following are forbidden: 1. Littering. The managers of mountain shelters and other buildings in the park are responsible for the cleanliness of the nearby area, the transport of garbage, wastes, ash, slag and the disposal of those which do not fulfil the sanitary requirements. 2. Hunting, killing and catching wildlife. The park superintendent can exceptionally allow the collection of specimen and fishing. 3. Destroying or damaging the trees or other plants. The tree felling or copping in the forests that are not owned by state is regulated by separate rules. 4. Polluting the water. 5. Changing the watercourse, except the water fetching of water for use by local population; constructing the dams and weirs. 6. Damaging the soil, damaging and extracting rocks and minerals. 7. Extracting stones and gravel from the creeks without the permission (based on the agreement of the Provincial National Council) of park superintendent 8. Damaging the caves, damaging, transporting or removing the remaining of animals and minerals, extracting the fossils, silt or alluvium. 9. Breach of peace through the loud shouting, singing, playing instrument, radio or listening to tape, etc., outside the mountain shelters or the other permanently used buildings. The internal combustion engine vehicles that operate in the park permanently (stamp mills, concrete mixers, electrical aggregates, ski lifts) must be equipped with noise silencers. 10.Setting fire in the park, except when it is connected with rescue operation or is necessary for saving people's life. 11.Grazing the animals at the state owned area. 12.Constructing for the individual or community purpose without agreement of the Park Council. In the case of disagreement between the Park Council and land use planners the Minister of Forestry and Wood Industry makes the decision. 13.Reconstructing, extending and removing the existing mountain shelters and grazing around operation buildings. 14.New communication, technical and medical devices constructing, whose presence does not agree with the principles of the national park. 15.Constructing and operating the industrial plants. 16.Camping outside the areas designated by the park superintendent. 17.Trading and establishing the trading posts without the permission of park superintendent 18.Shooting and bringing firearms or air guns into the park. This rule does not apply to the officers of the Polish Army, Border Rangers, Police and the park workers who are on duty. 19.Bringing dogs into the park. Dogs near the mountain shelters, houses and cottages, must be kept on leash. The park officers are empowered to shoot the dogs and cats that roam in the park. 20.Extracting ice from lakes and creeks. On 21.12.2007 Poland and Slovakia signed Schengen Agreement and accessed to "open borders" Schengen Area, however one must remember that National Park regulations prohibiting crossing the border beside marked trails in the whole area remain in force.

Best Conditions but most crowded: June until October. Climb it year-round, winter time requires equipment for freezing temperatures and the snow ,great area for ski touring .

Lots of accomodation possibilities in Zakopane and the area from expensive hotels and luxury pensions to hundreds of private rooms ,hostels and camp sites . There are 2 mountain chalets near Kasprowy ,first of all Murowaniec Chalet at Hala Gasienicowa and Small TPN Chalet at Hala Kondratowa on the marked route to nearby Giewont Peak .

There's a book (English) called 'The High Tatras' by Saunders & Narozna and published by Cicerone Press
(1993). It's available from adventuroustraveler.com.