This sharp peak stands on the main ridge of the Tatra Mountains near the east end of the Roháče, which is a sub-group of the Western Tatras extending west from where the Slovakia-Poland border takes a sharp turn to the north, thus leaving the main ridge of the Tatras. Ostrý Roháč sits between Volovec/Wołowiec (2,064m) on the border and Plačlivé aka Plačlivô (2,125m) to the west of it. It has two pointed summits, a narrow crest and precipitous walls falling both to the north (to the Smutná dolina = Sad Valley) and the south-east (Jamnícka dolina). Ostrý Roháč is one of the two finest summits within the Roháče sub-group, and can only be rivalled by Baníkov.

But Polish people tend to think there are two Rohacze: Ostry and Płaczliwy (Slovak: Ostrý Roháč and Plačlivé, which translates as, respectively, Sharp&Horned and Weepy). Rohacz Ostry is nearly 40m lower than Płaczliwy (i.e. the other Rohacz the way Polish people see it), but the latter is more rounded and doesn't get so much attention. Formed of granite, or rather granitoid rock, which is the actual reason that makes the Roháče look so attractive against the gneiss-schist background, Ostrý Roháč seems to owe its name to its shape. The noun in the name of the peak appears to derive from the adjective "rohatý/rogaty (horned)", and literally means deer stag (roháč/rogacz). Whereas according to the Slovaks Ostrý Roháč is 2,087.5m high, some Polish sources maintain that its actual elevation is 2,084m. Today, technical climbing is forbidden in the area as it has been designated a nature reserve. The north face was first climbed by a team led by Walery Goetel in 1908. 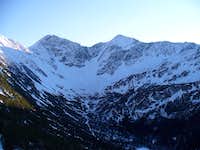 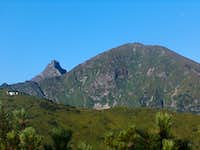 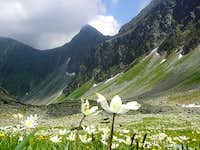 Up the "horse"
For the hiker/scrambler, the tastiest bit is the uppermost part of Ostrý Roháč. The top crag is split in half by a distinct cleft called pretty simply Rohacka Szczerbina (Notch). This place can be more dangerous than the locally famous "Rohacki Koń" (koń = horse: some have straddled it, usually in winter, while moving along; it's the most exposed bit of the marked trail of all in the Western Tatras. It sits on the other side of the NE summit of Ostry Rohacz (which is a couple of metres lower than the main, SW summit). Its southern flank just below its edge is very steep but not vertical, however, several metres down there is a sheer drop so those who have no head for heights are out of play, without a shadow of a doubt. Although the holds are good and firm, so that in good summer weather conditions an experienced scrambler does not have to touch the metal chain which secures the passage here, if you lose your grip, whether on the chain or on the rock, you will have no chance of surviving the fall. This is one of the few places between Rohacze and Baníkov where you usually have to wait several minutes till people coming from the other side have passed this little arete, about a dozen metres long. People usually take good care here so I guess more have lost their lives having fallen down from the Notch. There is no chain at the bottom of the Notch, and if you are in a rush, proceeding very fast, you may trip or slip easily and be gone forever. Surely it does not make much sense to return along the same route. While studying the map, you will see there is always a better option. To my mind, it is more fun to climb the crest of Ostrý Roháč from north-east to south-west, that is to say from Jamnické sedlo at 1,908m towards the summit of Plačlivé. Several minutes' walk up from the saddle, and you will lose sight of the summit till you pass the secondary, NE summit of Ostrý Roháč. You will not see the "horse" either until it stretches just before you, however, you will sense its tangible presence as soon as you can see the first piece of metal chain. Remember not to start "jogging" after traversing the "horse" and the northeastern summit, as there is the seemingly innocent Notch several metres away. From the Notch, a little scramble (another few metres of chain) will take you to the very top of Ostrý Roháč. Don't be surprised if you see a group of friendly Czech hikers, sipping lager from a can. You'd better not join in, just smile and say "Ahoj" (Czech and Slovak for "Hi"), enjoy a superb panorama, then start to return or carry on heading for Plačlivé, along an easier path (picture below; and above, left: "SW face"), one more short piece of chain you may find helpul, and you get to Roháčske sedlo (1,955m). 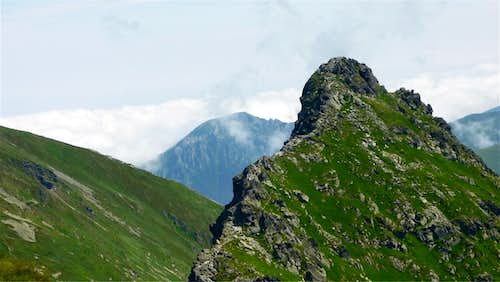 The ridge just SW of the main summit - photo by janstolba.
A winter climb, as usual, is a completely different story. If you know what you are doing, the least troublesome access in winter would be from the summit of Volovec which sits on the Slovak-Polish border, less than one kilometer away. But in winter even Wołowiec - not to mention Ostry Rohacz - can turn into a destination that requires an ice-axe. 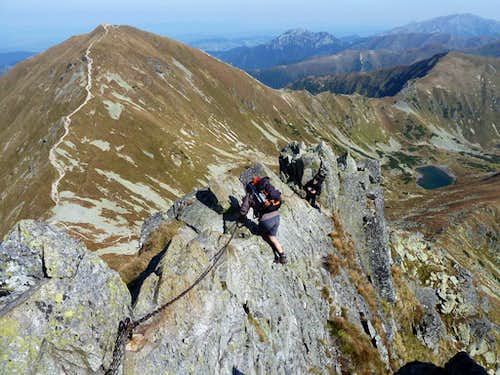 Fortunately, border crossing is no problem any more but the national park rules are quite strict. In Poland, you pay a little entry fee but you can walk all year round, although you are not allowed to leave the marked trail. In Slovakia, there is no entry fee but the higher elevation trails are closed from 1 November to 15 June. Here are the detailed regulations for various fun activities. 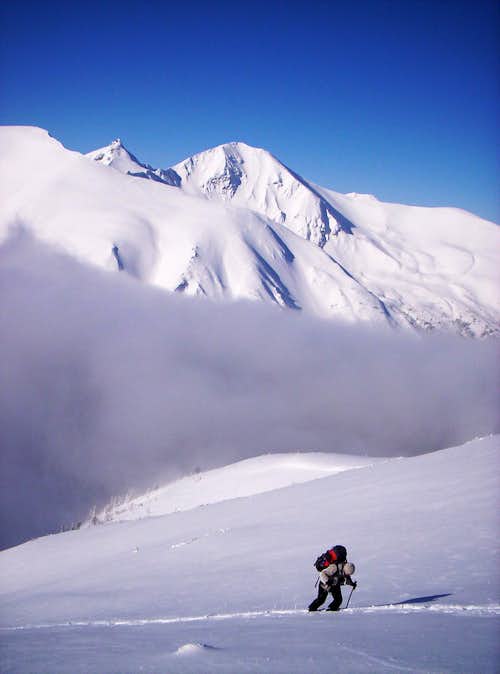 Wołowiec (2,064m) - centre and Ostry Roháč left of the centre (2,088m)- photo by bboltr.
Up the Račková River and Jamnický Creek:
Via the Žiarska Valley:
If you climb both Ostrý Roháč and Plačlivé, or both Ostry Rohacz and Wołowiec, the total elevation gain increases by about 160m. If you climb all the three peaks, add 330m to the net gain (tables) to get a rough calculation of your total elevation gain. The northern routes tend to get crowded in summer. In the high season, the first of the southern routes listed in the 1st table above should offer the most solitude.

Roháčske plesa and dolina from the west - photo by mikus. Ostrý Roháč is the shadowy pyramid on the right.

In Slovakia - unlike in Poland - those who do not carry commercial insurance have to pay for any rescue services rendered by Mountain Rescue Service (HZS). Mountain rescue team's phone number: Slovakia (HZS): 18 300 Poland (TOPR): 601 100 300 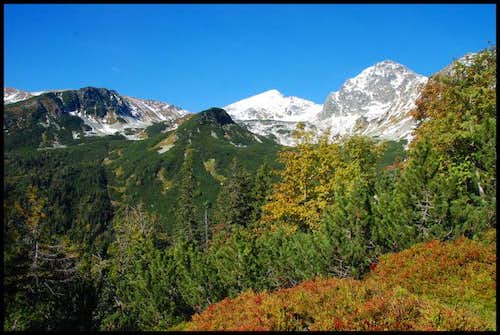 Ostrý Roháč (right) beyond the Jamnícka Valley, viewed from ESE - photo by rama.

I give one more voice in favour of Slovak diacritics in the title :)

Why not just call it "Ostrý Rohá?/Rohacz Ostry". I use duel titles in my pages that have well known names in both Welsh and English. Or is there some reason you would not want to do that here? Cheers - D

Now that the other heading has been changed from "Ostry Rohac-Placlivy" to "Placlivy" - hopefully "Placlive/o" in the future - I think I'll just replace Ostry Rohac(z) with "Ostrý Rohá?". I don't think the Polish version is necessary since the pronunciation is nearly the same - unlike here . (Plus that "Rohacz Ostry" is the formal name, but the usual word order, i.e. adj+noun, is the same in Slovak as in Polish/English.) And we don't want to end up with "Ostrý Rohá?/Rohacz Ostry/Hegyes-Rohács (Hegyes-Szarvas/Agancsos)," do we? Any Slovaks disagree? :-) Cheers, Jacek

Hey, WHY did my comments disappear? Where's my beer and/or bear??

Why don't you ask the bear? If you ask ME, I thought the woman whose comment was deleted along with yours could feel offended - she's not a native speaker of American English. I hope now everybody can have fun having their beer.

Sorry, it wasn't my intention to offend anyone. If anybody should feel offended, it should be me! I always wanted to speak another language other than English. Oh, that's right! I forgot about "body language!"

Thanks very much for your statement, Larry. If you meant that red and white beast, barking at great American grizzlies, personally I don't mind seeing it back here.

It seems the bear might become angry ??? The only bears I see here are brown and black.. There's some white ones up north, but they're losing their habitat very quickly.

To all, Oh bear beer me. Our European bears have a headache too. Thanks for your comments as long as they have a bearing on a particular page. One example may be these. And the following. Rohac/Rogacz Rohac Debowy rogacz A little something for all the bears, "with some European bitterness" :-)

Please BEAR with me. I'm searching for a good European brew..

Yatsek, you need to fix something on the page's title. It appears correctly in every kind of caption except on the Firefix tab's title where "?" replaces the accented letters. Have you used Peterbud's codes for the Slovak letters ? Just copy-paste the correct name while editing the page, as it is with accents and without codes. I had a similar issue on Placlivy and not it works fine.

My daughter's made me switch to Google Chrome:) Is it OK now? On IE too?

It is :) By the way, just noticed Ostry Rohac is on the front page ! Are my pictures the reason of that ? :-o

It can, if you post it on MBPost :D