The Pilis and Visegrád Mountains are a small (about 400 km2) but popular mountain group in northern Hungary. The names are of Slavic origin: Pilis (pleš) means "bald" (the mountain tops of Pilis usually have a clearing), while Visegrád means "high castle" (vyše hrad). The latter is the name of a small town - once Hungarian royal seat - located by the Danube River.

For a long time these two mountain groups were treated as one, and referred to as "Pilis". In fact, they form a compact topographic entity, however their geology differs greatly. In the Triassic period, the whole area was covered by a shallow subtropic sea, so the oldest rocks are sedimentary. Later, in the Miocene period, intensive volcanic activity changed the scene in the northern part (which is now the Visegrád Mountains), where the sedimentary fundaments were covered by andesitic rocks (only in several deep gorges the older sedimentary layers are visible). The southern part (now the Pilis) wasn't affected by volcanism, and further sedimentation took place before the range was lifted up. 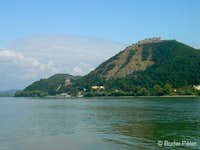 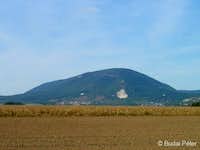 Thus, the key to be used to differentiate between the two mountain groups is the rock type. South of the tectonic fault line defined by the villages of Pomáz, Pilisszentkereszt and Pilisszentlélek lie the sedimentary Pilis, while north of it lies the volcanic Visegrád Mountains. The latter are geologically more akin to the nearby, but topographically clearly separate Börzsöny Mountains.

In the southwest, the Pilis are separated from the Buda Hills by the Pilisvörösvár Basin. In the east and in the north, the Visegrád Mountains are almost entirely bounded by the Danube River. There is a certain mountain block (the Szent-Mihály-hegy) north of the Danube Bend, which in geological terms belongs to the Visegrád Mountains, however, it is often treated as part of the Börzsöny, for geographical reasons (the Danube is a clear-cut border).

The highest point of the Pilis Mountains is Pilis-tető (756 m), while that of the Visegrád Mountains is Dobogó-kő (700 m). Both are rather flattish mountain-tops. On Pilis-tető, in the late 1970's the area around the former hiker's hut was converted into a military air defense base, which operated until 1996 - today its abandoned buildings are a "ghost-base". Nevertheless, the hikers and paragliders have returned to the place. The story of Dobogó-kő is slightly different. The first hiker's hut was opened in 1898.

The place gained popularity rapidly, and has grown into a complete holiday resort by now (with motorized vehicles, and the kind of people who come with them). The natural rocky lookout (after which the mountain is named) offers nice views on the surrounding mountains and the Danube. Also, there are interesting rocks below this "balcony". 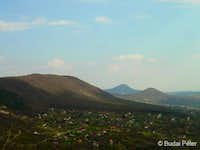 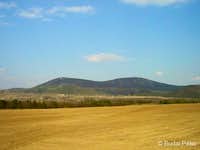 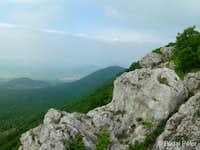 The Southeastern reach of Pilis Mts. 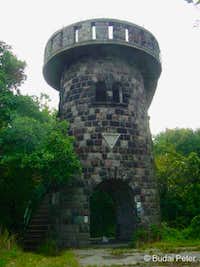 Despite their modest height, the Pilis and Visegrád mountains provide several interesting places worth checking out. As these mountains are within a good reach of the capital, they are rarely short of visitors.

The Danube Bend (Dunakanyar in Hungarian) is a scenic area, where the Danube River takes a pronounced, sharp turn between the mountains. The bend itself is based on the U-shaped caldera of an old volcano that ceased being active about 15 million years ago. The originally 1300-1500 m high volcano has been degraded and fractioned by landslides and subsequent geological processes to the remains which are now the Visegrád Mountains. Szent-Mihály-hegy (St. Michael's Mountain), situated on the north side of the river bend, is a remnant of a secondary lava dome, just like its counterpart on the southern bank, called Prédikálószék (Pulpit), from where the greatest view on the entire Danube Bend opens up.

Despite being made of limestone, the Pilis do not feature many deep gorges. The most pronounced one (called Szurdok) is located just southeast of Pilisszentkereszt village. Tourist trails lead both inside and along the upper perimeter of the gorge. The route along the bed of the canyon involves several wooden bridges across the stream, so its "wilderness factor" is not so high.

The Visegrád Mountains offer compensation in the form of a couple of well-developed volcanic gorges. The most popular ones are the Rám-szakadék (Rám Gorge) and Holdvilág-árok (Moonlight Ravine) - both receive a lot of visitors every season. The former is (over-)equipped with metal ladders and handrails at the key sections, the latter has remained more natural (a decade ago, a flash flood wiped out most of the man-made bridges). Some claim the Moonlight Ravine was a pre-Christian cultic place, others don't accept this. But without doubt the site was mined for magnesia in the early Middle Ages. Close by there is another ravine, the Salabasina-árok - once a marked trail lead through it, but now it's wild again and rarely visited. Another interesting spot is the Vasas-szakadék (Iron Fissure) - a short but deep tectonic cleft in the middle of the forest.

Both the Pilis and the Visegrád Mountains feature several exposed, scattered through the woodland, rock formations - some are well-known, some are less so. Depending on which region they are located in, their rock material is either andesite (Vadálló-kövek - Sentinel Rocks, Zsivány-sziklák - Goon Rocks, Gomba-szikla - Mushroom Rock, also called as Napoleon's hat), limestone (Vaskapu - Iron Gate, Fekete-kő - Black Rock) or another sedimentary rock (i.e.: the dolomitic Teve-szikla - Camel Rock). The limestone walls of Oszoly are a classic climbing crag in the Pilis.

Given their geology, the Pilis Mountains are rich in caves (in Hungarian: barlang). These range from simple, short, "dwelling-size" halls (which also served as home for the ancient man) to complex cave systems, parts of which haven't been fully explored yet. The caves and sinkholes are to be found all across the hills; the richest area seems to be the Pilis-tető mountain. Here a couple of long caves - previously believed to be separate - have recently been proven to be connected (with gas-tracing method), but not all of the connections have been explored yet. More information can be found on this site (in Hungarian, but with photos). 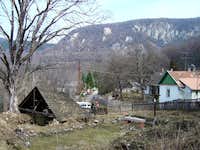 A far-from-complete, arbitrary selection of caves in the Pilis:

The longer and hardly accessible caves feature very nice stalagmites and stalactites. These are closed for the protection of both the caves and people (there are dangerous passages). Some, however, can be safely and legally visited under the supervision of professional guides. Other caves (dwellings), or their easily accessible parts, can be visited freely. 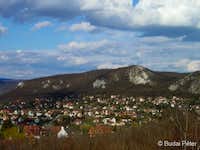 Oszoly hill from above
Csobánka village 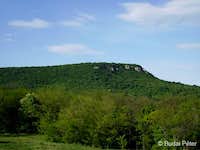 As stated above, the Pilis and Visegrád mountains are easily accessible from Budapest. Depending on which point you want to start and end your journey at, it will involve either bus or some kind of train/railway.

The villages south of the Pilis Mountains can be approached from Budapest by train. The trains depart from the Western Station (Nyugati pályaudvar) on a frequent schedule towards Esztergom, the passenger trains stop at each village.

Szent-Mihály-hegy can also be approached by train (Budapest -> Szob), also from the Nyugati station. Take off either at Nagymaros or Zebegény. From the train you'll have views of the Danube Bend from the river's northern bank.

All the other settlements (e.g. Visegrád, Dömös, Pilisszentkereszt, Pilisszántó, just to highlight the most frequent start/end points of the hiking trips) can be accessed by regular buses from Budapest. These depart from the Árpád-híd (Árpád bridge) bus terminal.

Pomáz and Szentendre can be reached by suburban railway (known as HÉV) from the center of Budapest (Batthyány square, right opposite of the Parliament buildings across the Danube). From the Pomáz HÉV station, there is also a bus to Dobogókő. It's a good idea to take it to pass through the village, in order to avoid a rather boring walk and have more time to walk around the forest.

The southeast end of the Pilis extends as far as Budapest, so you can start from within the city as well. Take the HÉV until Csillaghegy stop, from where follow the hiking trail markings (red stripe) to start the ascent of the Pilis ridge.

Both Pilis and Visegrád Mountains are part of Duna-Ipoly National Park, established in 1997. The area is home to several protected species. Visiting is free, the usual rules apply - respect nature! Camping is not permitted in the wild. 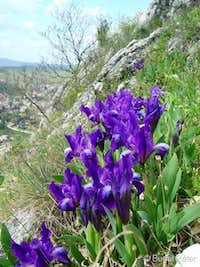 The region is packed with accommodation possibilities, so only three historic hiker's huts and a camping place will be highlighted.

The Eötvös Lóránd hut (named after the renowned physicist and outstanding climber - from whom Cima di Eötvös, a tower in the Cadin group takes its name also) has stood on the top of Dobogó-kő since 1906. It is the second building on the mountain; its predecessor was a wooden hut built in 1898 (also named after Eötvös), which stands there but serves as a museum.

The Kő-hegy hut (János Czibulka hut) is located in the eastern part of the Visegrád Mountains, on the top of Kő-hegy (360 m), near to the town of Szentendre. It was built in 1933. On the eastern, rocky side of the mountain there's a lookout point and some scenic rock formations, like the "Mushroom" (Napoleon's hat).

There used to be a few more hiker's huts, but these have been either converted into more fancy hotels/bars or demolished; some have kept their original function but are not open all the time (you have to get the key from the club that owns the hut).

If you wish to camp, probably the best choice is the camping place at Dömös, right in the scenic Danube Bend, by the riverbank.

By the main lookout of Dobogó-kő you'll find the memorial of Ödön Téry (1856-1917), sometimes referred to as Edmund Téry, one of the most important figures of the "pioneering age" of Hungarian mountaineering. Besides the High Tatras (where he made four first ascents), the then-ignored Pilis Mountains (note that in his time the name was applied for both mountain groups) and in particular, Dobogó-kő were his favorite places. It was Téry, who proposed the building of the first hut on Dobogó-kő, as well as one of the mountain huts in the High Tatras, which was - and still is - named after him: Téryho chata.