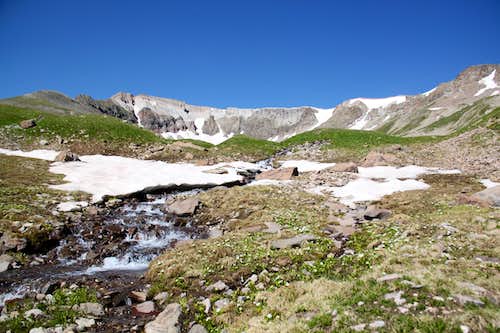 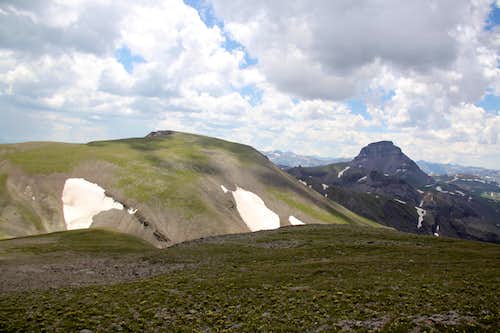 Silver Mountain from UN 13,681. Uncompahgre Peak on the right
Silver Mountain is a remote high 13er located in the northern San Juan Range. The mountain is hidden deep inside Uncompaghre Wilderness. Is is a bicentennial peak (among the highest 200 in Colorado), and it is also among the highest 50 in San Juan Mountain Range for those who like to complete certain lists.  It combines really nicely with neighboring 13ers. I chose to do this peak as a day hike and combine it with Unnamed Peak 13,681 feet.
Why Silver Mountain A? because there is Silver Mountain B 13,470 feet close to Telluride.
Some may consider to plan an overnight trip since I probably logged in about 16 miles. For peak baggers backpacking sounds like a better option. There are many unnamed low 13ers around (we have so many mountains in Colorado, so many ranked peaks have no names) and also very popular high mountains like 14ers Uncompahgre and Wetterhorn are not that far.
I chose an approach via beautiful Fall Creek trail, which offers solitude, a long hike through a high alpine country (trailhead is at about 11,000 feet!). I saw a huge herd of elk and no people all day long. Fall Creek is an excellent area for trout fishing and mushroom picking. If coming from Uncompahgre Peak area expect seeing a few people since 14ers are popular destination.
Silver Mountain has a long curved summit ridge. It does appear challenging if one is coming from the east side (see photo on the left), but if approaching from the north, the mountain looks almost boring (see photo on the right).
Colorado Rank: 139
Parent Lineage: Uncompahgre Peak
Wilderness: Uncompahgre
Class: the easiest route is class 2 via north slopes, but more difficult options exists. I chose to come up via east ridge, which I would rate as class 3, and descended the northwest slopes (between Silver Mountain and Unnamed 13681).
Nearby Mountains:

The Fall Creek Trail #231 begins at Fall Creek Trailhead - well signed located at the end of the Little Cimarron Road.
From Gunnison travel west on Highway 50 for approximately 26 miles to the intersection with County Road 864 = Little Cimarron Road (signed). Or from Montrose it is about 22 miles east on Highway 50 to the same intersection. Travel south on CR 864 - gravel, easily passable by 2 WD vehicles to the end of the road - large parking area, well marked = Fall Creek Trailhead. It is about 20 miles on the gravel road. (4 miles past East Cimarron Trailhead).

There are several options to get to the summit. I chose to climb up via steeper and more exposed east ridge which deposited me very close to the actual summit and I would highly recommend this approach for those who are comfortable with short class 3 sections. I descended easy northwest slopes, which is mostly a hike on grass.
Approach to the mountain: I chose Fall Creek Trail, other optional trails would be Little Cimarron trail, Big Blue  Creek Trail. I have not explored East Fork of Cimarron, but per map appears approachable.
Fall Creek Trail: From the trailhead hike up on a nice and well marked trail, which leads initially into the forest, and then continues along a small stream and gently up through meadows. At about 2 miles you enter into a forested area and descend slightly down towards bigger Fall Creek drainage. Cross the creek (I had to take my shoes off since the water was high) and follow a trail along the creek in southern direction through open meadows, another creek crossing, through some marshes until you get below Silver Mountain. At places the trail nearly disappeared in the grassy meadows, just to be found higher up. I continued up in southern direction along the eastern flanks of Silver Mountain and left the trail before it started to drop down into Big Blue Creek drainage. Unfortunately, there were no signs and I did miss the intersection for Little Cimarron Trail. However, I have found this trail on my way back without any difficulties.
Ascent via east ridge: Both Fall Creek Trail and Big Blue Trail will bring you right along the eastern slopes of Silver Mountain. The views of the mountain from the trial are excellent and the Silver Mountain appears unapproachable and steep, but there is a way, and you don't have to deal with infamous San Juan scree here. Hike up easy grass slopes until you get a better view of the cliffs above. Continue up the easiest terrain to the steep appearing brown cliffs. I found a weakness on the east side and scrambled up on class 3 terrain with nice ledges to give you a rest. After a short scramble I was on the top of the brown cliffs and headed on an easier terrain to another steeper white section of the east ridge. It was a little loose here, but again class 2+/3 section was short and soon I was at the top of the mountain. Silver has very steep cliffs on the east side, but its west side and to the north are huge grassy areas. It was only a short walk from the top of the scramble to the summit cairn. There was a summit register. The views of Uncompahgre Peak from the summit are one of the best.
Descent via north slopes: I chose this since my next objective was Unnamed Peak 13681. Obviously, this route is an option for those who do not like exposure or hike with dogs. This is also an approach if coming from Little Cimarron Trail. It is a long way on an easy sloping grassy side of the mountain, not technicality noted all the way down to the saddle with UN 13681. There was even a little sign of a trail towards Little Cimarron Trail.
My return: I needed to get back into Fall Creek drainage, which meant climbing over the ridge between Silver Mountain and Unnamed 13051 (if the weather would be nice UN 13051 would be an easy summit). I tried not to loose much elevation, so I chose to transverse a really annoying steep scree and climb up this scree causing several rock avalanches. Basically, I was bypassing below Silver Mountain's north and east face towards the saddle between Silver and Unnamed 13051. I did not see a trail. I just traverse and then went up the endless appearing scree field. It was hailing and thundering, so I tried to move fast to get to safety. Once I reached the saddle, the other side was nice and grassy. Soon I found the trail connecting East Cimarron Trail with Fall Creek Trail. 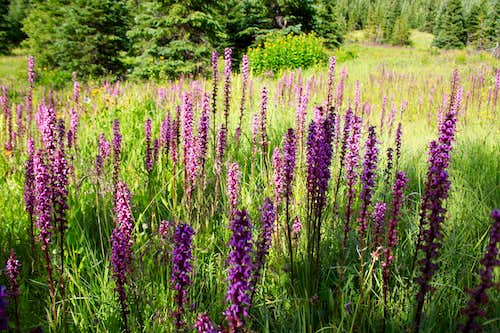 Best is June through October, early May will still have too much snow.
If traveling in winter, always check avalanche conditions and be prepared to spend the night out.

Wilderness backpacking camping is excellent with many many options, creek nearby and solitude.
You can sleep in the car at the Fall Creek trailhead - the parking is at the end of the road and parking lot is large and flat.
There are few primitive campsites along the road in the woods as you drive in, a few by the river right before you hit East Cimarron TH, and higher up in the forest between East Cimarron TH and Fall Creek TH.