It is not its height which attracts climbers, but it beauty and unusual shape.

Wildhorse Peak overlooks American Flats from its north, and is a part of southern Uncompahgre group of mountains. The peak is truly easy to recognize with its unusual shape and got my attention a long time ago. There used to be a page for Wildhorse Peak on SP, but it was erased, and I am hoping to recreate a suitable site to describe this mountain. The approach hike is spectacular, there is no scree along the way, and the views from its summit are amazing! Wetterhorn an Uncompahgre in the distance, Dragon’s Back in the foreground. Cimarron peas with Coxcomb, Redcliff, Precipice, Chimney Rock and Courthouse on its north side. One of the Colorado’s finest views from any mountain.

It does even make it into bicentennials (= the highest 200 in Colorado) or San Juan 50 highest, and perhaps for this reason it gets “ignored" by those seeking high elevations.

Climbing History: The first reported climb was in August 25, 1899 by Eli Stanton, F.H. Stanton, and William Killen. The climb was part of a trout fishing trip in which Eli wished to give his visiting relatives “a thrill”. Although the exact route was not reported, they apparently took a route with some exposure, as F.H. Stanton “was forced, through nervousness, to crawl on his hands and knees”.

New routes in the area were not reported until 1960s. The northeast face of Wildhorse Peak was climbed in August 1968 by Etter, John McDermott, Henry Baker, and Greg Simmons.

Some of the first winter climbing in the San Juans took place in the area in 1934. Gordon Williams and Melvin Griffith skied from Ouray to Engineer Pass and climbed Engineer Mountain. After climbing Engineer Mountain, they skied across American Flats and climbed Wildhorse Peak. They continued onto Wetterhorn, but had to turn due to a furious storm and climbed Dolly Varden Mountain instead. To conclude their journey they skied to Silverton. What a distance on skis! I have a hard time to drive it in my car on those rough 4 WD roads. 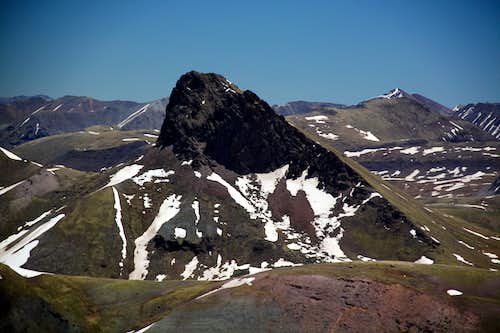 Wildhorse Peak 13,266 feet - as seen from the summit of Cow Benchmark. 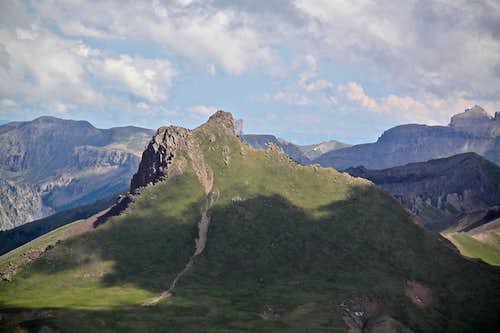 Wildhorse Peak as seem from the summit of Darley Mountain.

And if summiting Wildhorse Peak and above mentioned nearby peaks is not enough for you, there are half a dozen unnamed "twelve's" and "thirteeners" on the long rolling ridge heading northwest to Wetterhorn. The most famous one bears an unofficial name Dragon's Back = Point 12,968 feet, and this is truly a spectacular semi-technical peak requiring low 5th class moves to reach its summit. I spend a couple of hours scrambling and walking around this magnificent point, but did not summit. Duchess was with me, and I was afraid that she would fall somewhere. I had to lift her up many times, and we got about 2/3 up the peak. The route looked like it would require some 5th class exposed moves. SP album about Dragons Back. 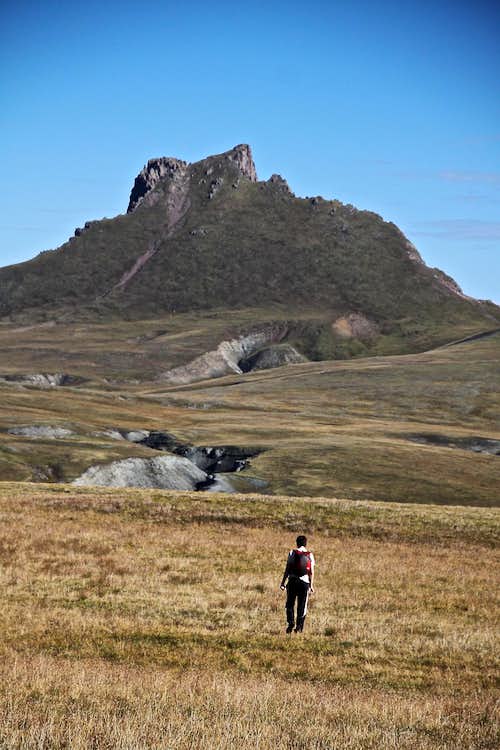 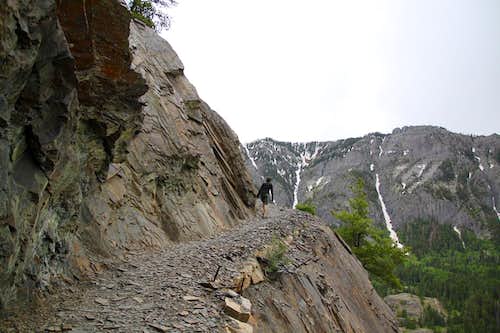 From Ouray, the turnoff to Engineer Pass is a little over three miles south of Ouray. Once at Engineer Pass, the road takes you east to American Flats with Wildhorse Peak to the north. The trailhead is on the east side (Lake City side) of the Engineer Pass. There is a marked trailhead for Horsethief Trail, mile marker 17.


From Silverton, follow the road up the Animas River past Howardsville, Eureka, and Animas Forks to reach Engineer Pass.

From Lake City follow the Henson Creek towards Capitol City and Engineer Pass. Trailhead is below the Engineer Pass summit, mile marker 17. There is an Alpine Scenic Loop information sign and a small pull off (=parking lot).

Another great, but long approach on foot (no need for 4WD vehicle and off road driving) would be using Bear Creek Trail approach. You start just 2.3 miles past Ouray, and follow this spectacular historic trail past the Yellow Jacket Mine at 4.3 miles. You will take the left (north) fork well signed for Horsethief trail, and it will bring you to American Flats. One way is about 7.1 miles to American Flats, add 3 more miles to the summit of Wildhorse Peak, so count slightly over 20 mile round trip. Could be a great long trail run, or an overnight backpacking trip.

Northeast Face: The October 1969 Trail and Timberline reports a climb on the left side of the face consisting of three plus leads on the prominent corner of the face. The route was rated 5.6.

Both routes descriptions are from The San Juan Mountains: A climbing Guide by Robert Rosenbrough (this book is out of print and is available used from Amazon for 83$)

We hiked up via Southeast Face, which seemed more logical and less steep. It appears to be the easiest way up the peak. The route finding was easy. There is no real established trail, but hiking up mountain's grassy slopes was very easy. The difficulty does not exceed class 2. The peak would be relatively easy to  ski in the winter time. The nice part is that there is no scree to deal with. The views are incredible in all directions.

There is a nice cairn at its summit with a new Colorado Mountain Club register (placed in July 2013 - it had about 12 entries in).

Round Trip if started from American Basin via Horsethief Trail: 6 miles

American Basin is home to a spectacular show of wildflowers each July. Species include larkspur, lupine, old man of the mountain, Indian paintbrush, monkshood and native columbine. The flowers usually peak mid-July.

There are no fees to hike up any of the trail. The driving on alpine scenic roads to access the high approach at American Flats/upper Horsethief Trail is free too, however it does require a high clearance 4WD vehicle.
Expect sheep grassing in the area during the summer, and as Sarah mentioned be aware of mean sheep dogs (I did put Duchess on leash this time since 2 of those dogs approached up. No sheep chasing this time).

Summer and early Fall are the easiest. You can approach the American Flats via 4WD vehicle. Winter would provide a long approach through avalanche country. The southern slopes on Wildhorse Peak are grassy and not that steep, and could be a nice ski descent.

Wildhorse Peak (13,266 ft.) on the right, as seen from the northeast on Peak 12,913 - July.Click the photo to see a larger version.Photo Â© Jack Brauer : www.WideRange.org

American Flats is a nice open area of rolling grassy hills. You area is above the tree line, so no protection from winds/storms. You can find many backpacking spots. One of the best is just past Willdhorse Peak at the base of Dragons Back by a small lake. There is a nice flat area in the vicinity of this small green unnamed lake, incredible views, and it is protected from winds. This requires about 4 miles approach in northern direction across the American Flats.
Car camping is better lower down on the road, towards Lake City (east). There are multiple primitive camping spots along Henson Creek for several miles. The elevation is lower here, there are trees around, and campsite although primitive, usually have build up some fire rings from stones.
Developed camping would be a longer drive away: close to nearby towns of Lake City, Silverton, or Ouray.