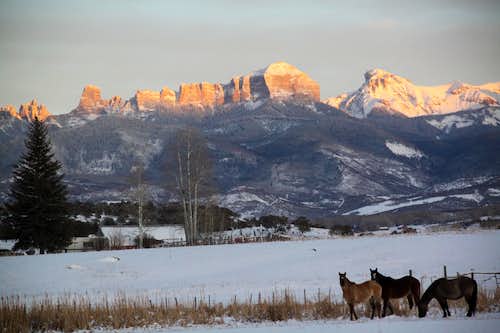 Courthouse Mountain is an exceptionally striking peak south of Owl Creek Pass in the Cimarron Mountains sub-range of the San Juan Mountains of Colorado. Uniquely shaped and with over 1,000 feet of vertical prominence, Courthouse Mountain strikes quite the figure across the skyline and is easy to distinguish from its neighbors. Further underscoring the local importance of this mountain, it occupies a USGS quad named Courthouse Mountain.

The views from the top of this mountain are positively astounding! Much of the wild and wooly Uncompaghre Wilderness is visible from the top of Courthouse Mountain. To the immediate east-southeast sit Dunsinane Mountain and Precipice Peak. South along that ridge is the rugged combination of Redcliff and Coxcomb Peak. Northward along the Cimarron Ridge the visitor can look down on the slender tower of Chimney Rock. Silver Jack Reservoir is visible in the northern distance. 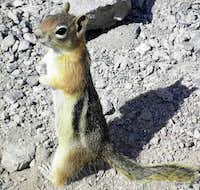 Unusual for a San Juan peak, Courthouse Mountain has a trail almost all the way to the summit (a trail reaches the rocky summit ridge) making this a good "introduction to the San Juan highcountry" type of mountain. The summit ridge is airy but broad and presents a good introduction to San Juan scrambling for the uninitiated. This mountain offers serious bang-for-the-buck and is well worth the trip! 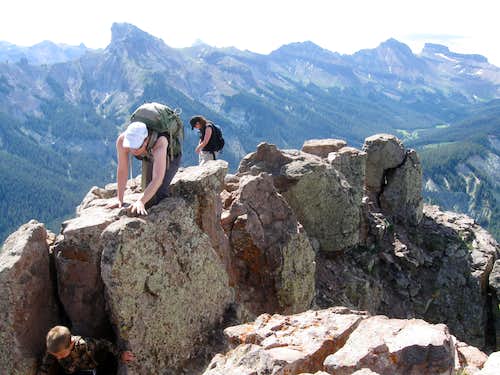 Courthouse Mountain is roughly half way between the Colorado towns of Ouray and Lake City. While there are a few small, municipal airports nearby, Denver International Airport, the nearest major, international airport, is over 200 twisty, turning miles away.

There are several ways to reach this peak by road. The mountain can be accessed from the west via FS 857, or from the northwest via FS 858. However, most visitors to this peak will access the mountain via FS 858 to FS 860 for the most expedient route to the summit via the Courthouse Mountain trail.

From US 50 between Montrose and Gunnison: Head south on County Road 858 (which becomes FS 858). Note signs to the Silver Jack Reservoir. Pass the Big Cimarron campground and the Beaver Lake Campground. At approximately mile 18, pass Silver Jack campground and the Silver Jack Reservoir. FS 858 loops tightly around the southern end of the reservoir. Continue on FS 858 as it again turns almost due south. At the junction with FS 860, do not follow FS 858 up Owl Creek Pass, but instead head southbound on FS 860. Less than two miles after passing the junction to Owl Creek Pass, arrive at the Courthouse Mountain Trailhead (Forest Trail #218 / #144).

In dry conditions, you do not need high clearance nor do you need 4x4 or all-wheel drive for these graded forest service roads. 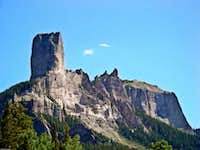 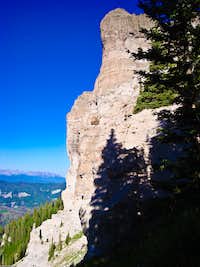 Note that only Silver Jack Campground has water. Campgrounds are open Memorial Day weekend through Labor Day weekend, and reservations are not accepted.