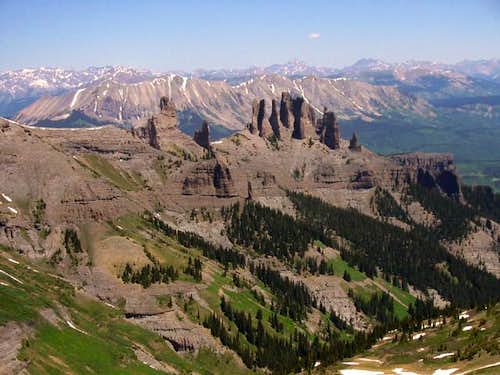 The mighty Castles from Storm Pass

The West Elk Mountains are a rambling region between Paonia and Crested Butte. The majority of the range is contained within the West Elk Wilderness and its distinct geology sets it apart from the Elk Mountains proper.

The predominant rock type of the West Elks is the West Elk Breccia. This very distinctive volcanic rock forms some of the most graceful pinnacles I have ever seen and for that reason ties with the Crestone Conglomerate for the title of Colorado's most beautiful rock.

A breccia is an amalgamation of fragments of andesite scattered within a matrix of welded tuff. It forms from extremely violent volcanic eruptions that shred the surrounding bedrock and deposit bits of it along with layers of white-hot ash. The ash then welds itself together producing a somewhat durable rock that erodes to produce a myriad of sculpted forms.

Hallmarks of the sculpted West Elk Breccia are the Pallisades near Gunnison, the cliffs north of Blue Mesa Reservoir, and The Castles. The volcanics that produced the West Elks occurred about 34 million years ago (about the same time the San Juans were blowing themselves apart). In areas where the molten rock didn't explode upon the surface it formed dome-shaped lacoliths as at the Beckwiths and the Anthracite Range.

The present-day West Elks are quite serene in light of the ancient violence that formed them. Solitude and peace seems to be the hallmark of these mountains. 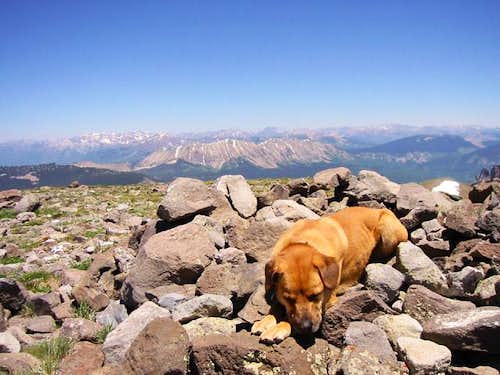 The summit of West Elk Peak

West Elk Peak is the highest mountain of both the West Elk Range and the West Elk Wilderness. It is located south of Kebler Pass in the heart of one of Colorado's most wild and pristine wilderness areas. All approaches are long but very, very worthwhile. Although West Elk Peak is a gentle and laid back summit the views of the rugged country all around stand in sharp contrast to its sedate demeanor. It is a beautiful recluse.

The scenery along the standard route (the Mill Creek Route) is breathtaking. I have never been anywhere quite like the Mill Creek Valley. The 2,000-foot tall sheer walls of the West Elk Breccia bristle with pinnacles, needles, fortresses, bastions, and (further on) castles. There are waterfalls here that will knock your socks off. Elk was everywhere when I visited the area. The beauty of it all is really overwhelming.

Any description of West Elk Peak would not be complete without more details on the prime attraction here... The Castles. This wonderful collection of sculpted fluted towers eroded from West Elk Peak's long northeast ridge is an amazing sight. The best views seem to be had from around Storm Pass and once there it will be an effort to tear your eyes away from them. The Castles have been climbed but I would think between the long approach and the technical nature of an ascent; they are seldom climbed. The view alone has satisfied me.

No Tape. No permits required.

Access to West Elk Peak may be problematic during wintertime and deep snows might restrict access to the trailhead. For this reason, I would say June through October would be the best time for an ascent.

There is a campsite at the Mill Creek Trailhead, as well as many others a mile or two in from the wilderness boundary. Higher campsites are to be found about 6.5 miles from the trailhead.