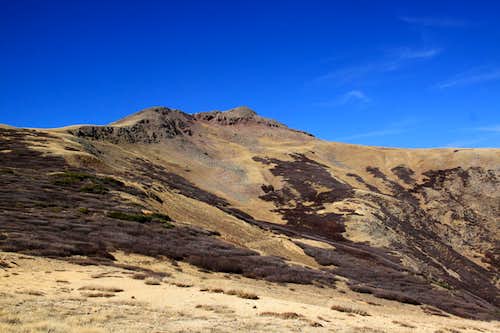 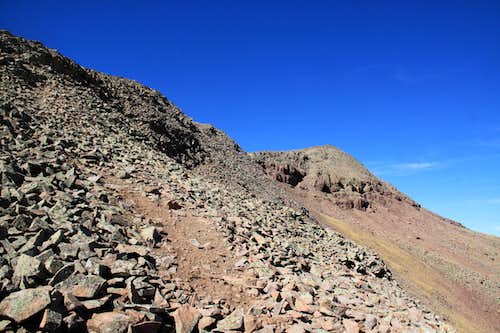 Bent Peak
Bent Peak is a relatively low 13er located near Carson Pass in San Juan Mountains. I guess we can call it a tricentennial - among the highest 300 in Colorado. It combines really well with Carson Peak and other 13ers in the area. One can start at Carson Pass, walk over Bent Peak, Carson, Tundra Top, Cataract Peak, UN 13580 B and then UN 13581, return back to Carson Pass and hike east to also claim Coney Benchmark. This would mean a long day. I started late, a little after 12 in the late October, so did only 3 peaks at a nice relaxing pace with long times on the summits.
Bent Peak is located along the Continental Divide. The Continental Divide is a mountainous hydrological divide of the watersheds that drain into the Pacific Ocean and those that drain into the Atlantic Ocean.
Technically, it is a very easy walk up mostly on a dirt road and a trail, higher up there is a short section of stable talus. It is kid and dog friendly, and the route finding is very obvious.
The closest town is Lake City - one of the more beautiful historical Colorado towns, definitively worth stopping by and exploring. Also, a little bit past the turn off for Lake San Cristobal along the Colorado Hwy 149 is the monument to the famous Colorado Cannibal Alfred Packer.
Ghost Town of Carson - has several well preserved buildings from the silver and gold mining era. The ghost town is on private property, visitors are allowed. Carson was founded in 1889 when some 500 miners worked the mountain top. Eventually the winters took their toll and the residents left. They say it was one of the most inaccessible mining camps in Colorado. The elevation is 11,600 feet. There is also Old Carson located on the south side of the divide, it was an earlier mining camp and the Old Carson is not that well preserved.
Guide to Colorado Mountains with Robert Ormes mentions Bent Peak together with Carson Peak: "Bent Peak (13,393') and Carson Peak (13,657') can be reached from Wager Gulch Drive. Drive 8.5 miles up the Lake Fork Road from its junction with Hwy-149, about 2 miles south of Lake City. The Wager Gulch jeep road takes you south 5 miles, passing the ghost town of Carson en route, to a saddle at 12,360' on the divide. The road continues as a rough jeep road over a 13,000' ridge and then south and east to Heart and Pearl Lakes. From the saddle on the divide, Bent Peak is a mile west-northwest, Carson another mile".
Colorado Rank: 232
Line Parent: Carson Peak
Class: 1+
Nearby Peaks: 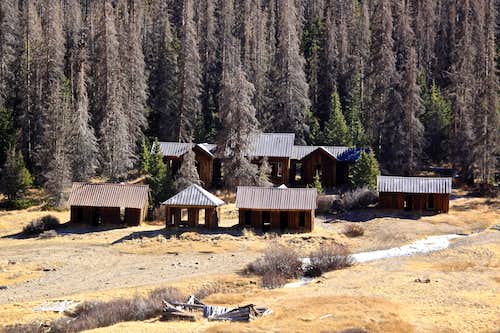 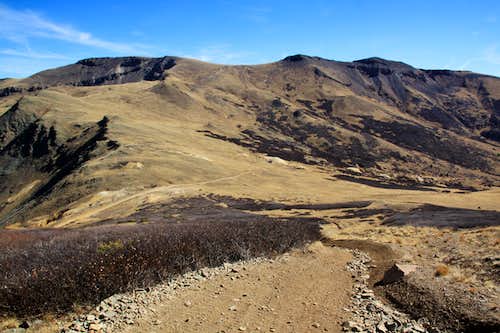 Carson Pass from the way up Bent Peak
Wager Gulch/Carson Pass: from the town of Lake City, drive south on highway 149 and then turn right onto County Road 30 to Lake San Cristobal, part of the scenic alpine loop drive (very popular in the summer). The road is paved past the lake then turns to graded dirt, passable for all passenger cars. About 2 miles past the Williams Creek campground, watch for a road turning off to the left (south) for the old townsite Carson. It is well signed as "Wager Gulch" road. From this point you need a high clearance 4 WD vehicle.
Head up the road through aspen and conifer forest. The road climbs steeply, higher up you will encounter a few primitive camping spots. The road was not very difficult, and I would almost say that the roughest section were lower down. I chose to stop at the old townsite of Carson since per other reports the road higher up was supposedly in a bad condition. However, as of October 2016, the road was good to go all the way to the Carson Pass. Carson Pass is not signed, but it is an obvious highest point of the road. There is plenty of parking. If you choose to park at the ghost town of Carson as I did, it will add about one mile to your hike, and some elevation gain. The Wager Gulch Road is about 5 miles long and the driving is slow.

Hike up the Wager Gulch Road to the top of the Carson Pass (or drive it - the road was in a good condition October 2016).
Bent Peak is the obvious peak on the west side of Carson Pass. You can see Bent Peak from Wager Gulch Road and obviously from the Carson Pass. Carson Pass has several dirt roads and slightly below on its south side is the Continental Divide Trail and Colorado Trail.
Stay high on Carson Pass, take a dirt road leading uphill and west, and obviously towards the Bent Peak. Follow this road until it ends, then walk on a trail and tundra. You will have some short rocky sections and may loose trail here and there, just to find it again. The route finding is super easy. It is roughly a mile from the Carson Pass to the summit of Bent Peak.
The summit had several cairns - the largest one had a glass sign in register. It also had several rocky shelters built. The peak is popular since it is so easily accessible. There is a nice view of Carson Peak and the route to Carson from the summit of Bent Peak is very easy - class 1+ and about 1 mile. The saddle between Bent Peak and Carson Peak is at 13,020 feet elevation.
Descent: either return the same way, or it makes a sense to continue on an easy tundra walk towards Carson Peak.

Driving to trailhead, parking and hiking are free. The peak is not a part of wilderness area. It is located in the Gunnison National Forest.

Summer is obviously the easiest, but autumn and spring are excellent as well. Winter would add a longer access, and some avalanche exposure. (The road up Wager Gulch is a little bit over 5 miles long and is closed in the winter).

Primitive camping along Wager Gulch road - higher up. The lower part of the road goes through some private property and the road is too narrow and steep to stop and find a parking spot.
Forest Service Campgrounds:
I don't stay in campgrounds since there are so many options for primitive camping in a high country.