Over time, the mighty Gods of erosion have rendered some nice handiwork around the Independence Pass area, Colorado’s highest paved pass. It is a different kind of Sawatch. It is a pristine Sawatch as well. Beginning with the rounded ridges and immense bulk of Mount Oklahoma, terrain east and southeast of the Divide gradually gives way to smaller, more shapely peaks. A lot of these peaks are bridged together with skinny ridges, which make for excellent class 3 scrambling. These are the mountains that seem to go on forever when looking west from the popular 14ers Mount Elbert and Mount Massive. These are the mountains of the Hunter-Fryingpan Wilderness. Most of these high 13ers are unnamed, which isn’t a bad thing when you’re looking for solitude.

Compared to most of its higher and more famous neighbors, Point 13,545 really stands out with its steep, classic pyramid shape. Unnamed, and almost forgotten, Point 13,545 teams with other nearby thirteeners to form a sea of unrecognizable beauty that’s worth exploring. The long ridge of high thirteeners that begins at Independence Pass and runs north before bending northeast to UN13,202, includes the obvious Twining Peak-13,711-ft, the mentioned Point 13,545, the nondescript Point 13,336 and the really rugged Point 13,150 which towers above Lost Lake. All of these highpoints reside on the Continental Divide, which is flanked by Independence Lake Drainage to the west and the North Fork Lake Creek Drainage to the east. An interesting side note; yearly snow pack that melts from the west slopes of UN13,545 runs down to Independence Lake. The small stream that drains Independence Lake soon becomes Roaring Fork Creek, which in time becomes the renowned Roaring Fork River.

Twining Peak resides just 1 mile south of Point 13,545 and just 2 miles north of Independence Pass. Knowing nothing about Twining until this season, I discovered this shapely peak on a failed attempt of Deer Mountain after a late season snowstorm June of 2004. From high in the North Fork Lake Creek Drainage, just below Deer Mountain’s east face, Twining Peak caught my eye as the best looking mountain along the long ridge running north. 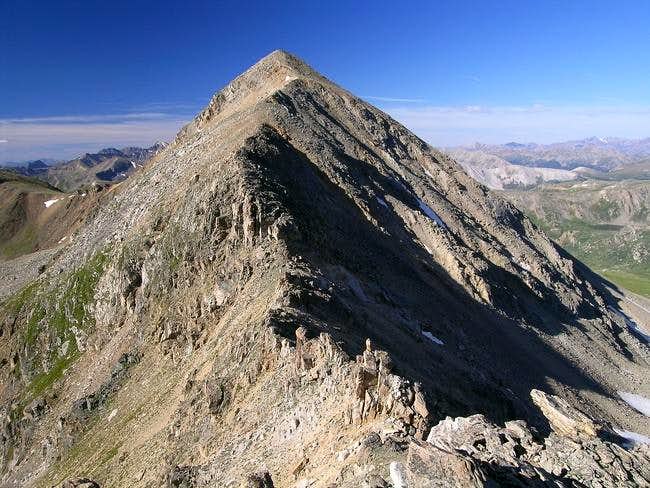 My route started at the Linkins Lake TH and ascended to Lost Man Pass above Independence Lake. From there, hiking east, I easily made the summit of Point 13,366. The section of ridge between Point 13,366 and Point 13,545 would easily fall into the class 4 category. This would be Point 13,545’s North Ridge Route. The ridge is mostly class 3 but expect two crux’s involving route finding and easy class 4 moves, and expect another crux that requires an awkward and exposed class 4 move above steep slabs of granite.

The ridge between Point 13,545 and Twining Peak is also class 4. Most of the difficulty lies in the section of ridge that descends from Point 13,545 to the saddle between it and Twining Peak. From the saddle, expect a few easy class 4 moves on solid rock up through a notch to attain the north ridge of Twining Peak. The remaining ridge after the notch to Twining’s summit is class 2. Next, a logical descent from the summit down the grassy south slopes makes for a classic loop route of both peaks.

Also, Twining Peak can easily be hiked via the south slopes from either the Linkins Lake TH or the Independence Pass TH, both routes are easy class 2 and require minimal effort. One of those two routes must be considered the standard. Also, Point 13,545 can be climbed by its class 2+ northeast ridge from North Fork Lake Creek, expect a longer approach and more vertical gain when using this route. For convenience, I have marked this route in green on my submitted topo map. 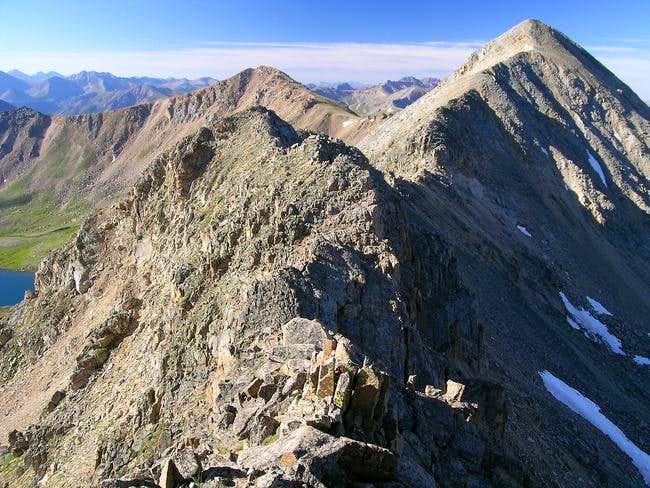