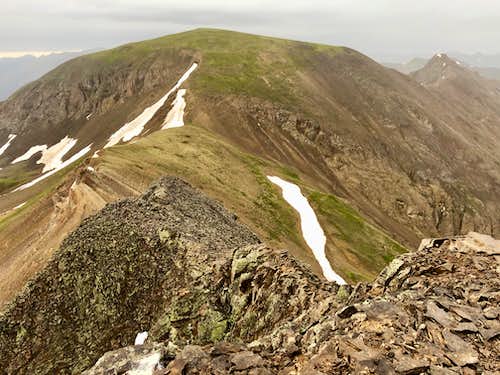 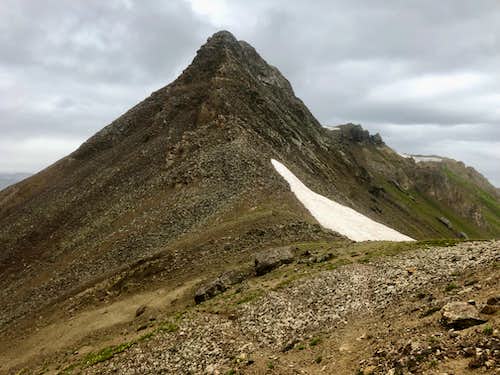 Igloo Peak
Mountain Boy Peak is an unoffical name for a low 13er located on the south side of Independence Pass, close to a beautiful mountain town Aspen. The peak is often climbed with Igloo Peak - you actually have to go over Igloo Peak if starting from Independence Pass.

Igloo Peak has a soft rank, elevation 13,060 feet. The saddle between Igloo Peak and Mountain Boy Peak is only 280 feet deep. Another 20 feet more and it would have changed Igloo's status to a ranked summit. Both peaks appear extremely easy when one looks from Independence Pass. There is a nice trail up there. But to my surprise I found a great scrambling on the south side of Igloo Peak. Igloo Peak looks really impressive from Mountain Boy Peak.

This is a highly recommended adventure for those having only a short time. Both peaks are located on Continental Divide.

Independence Pass is a scenic historic byway, part of state Highyway 82. It is paved, narrow and winding, open only seasonally (typically closes with the first heavy snow fall in October and reopens after Memorial Day). The Independce Pass is located 19 miles east of Aspen. The elevation at the summit of Independence Pass is 12,095 feet. There are many peaks to be climbed along Independence Pass Road.

Nearby Peaks (from Mountain Boy Peak): 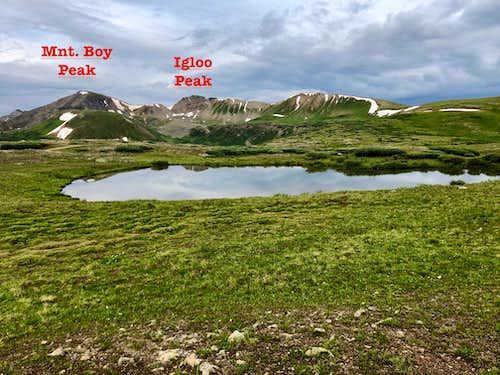 From Aspen (west): continue on Highway 82, well marked road for Independence Pass to the summit of the pass. The distance is about 20 miles and give it plenty of time. The road is very popular and there could be a lot of traffic. Some sections of the road are narrow, so only one vehicle can pass at a time. Keep in mind that road is open from Memorial Day (roughly) to the first big snow of the season (October/early November). The road is paved.

From Twin Lakes (east): again continue through a small historic community of Twin Lakes west for 17 miles to the summit of Independence Pass.

The road is very scenic and there is multitude of peaks to be accessed from this road, including the Colorado's highest Mount Elbert. 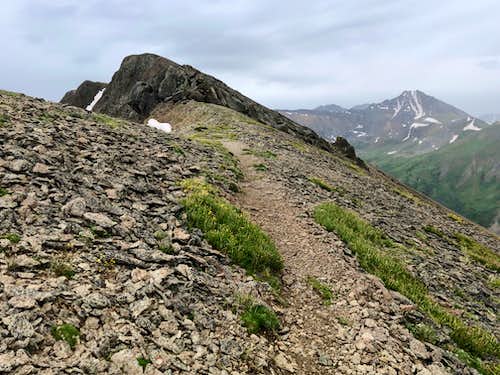 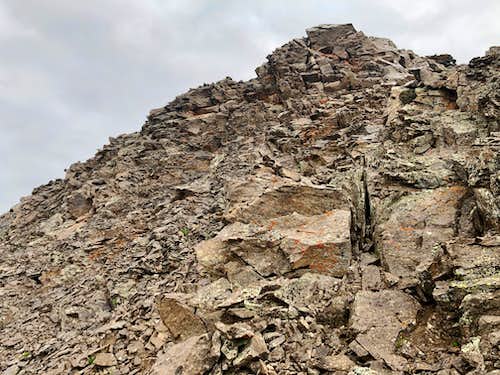 Igloo's nasty south side
The route appears so obvious when one looks from the summit of Independence Pass. It looks like a piece of cake and truly that is a nice trail all the way to the sub summit of Igloo Peak. Here it gets a more interesting and few scrambling moves here and there (nothing more than class 2/2+ if you are lazy looking for an easier option). BUT most of the way to the summit of Igloo Peak is class 1.

The descent from Igloo Peak towards Mountain Boy is nasty. If you continue directly along a ridge, you get cliffed out. I was looking down the cliff and it appeared climbable if you don't mind extremely loose rock and exposure. It was raining and I opted out to bypass these cliffs on the south side. The terrain was loose scree. I traversed towards the saddle between Igloo and Mountain Boy and here I picked up a trail and took it to the summit of Mountain Boy Peak. The rest of the way was easy. The summit of Mountain Boy Peak had a nice cairn and summit register was a plastic Gatorate bottle. I did not bother trying to get the log (a few pieces of paper out). It was raining and the views were limited. Grizzly Peak appears majestic from here. I returned the same way. The scree on the south side of Igloo Peak was much easier on the way up. You can avoid bypass Igloo Peak and drop into the Mountain Boy Park, but 2019 year was snow rich year and there was large cornices guarding this option.

Driving Independence Pass Road is free, also parking at the summit. Expect lots of cars on the road and slow driving during the season.

Summer and early autumn when the Indepence Pass Road is open are obviously the easiest time. Winter and spring mean a long access through avalanche terrain. Always check avalanche conditions prior venturing out.

There are many developed campgrounds along Independence Pass Road. I have slept several times in my car along the road and even on the top of the pass. There is a vault toilet at the summit of Independence Pass.