Mt. Cleveland is the highest peak in Glacier National Park. It is situated on the north side of the park about four miles south of the Canadian Border. The views and sense of wilderness are unsurpassable: I've never stepped in Grizzly Bear poop on the top of another mountain. Although technically easy, it is still very fun and challenging. In "A Climber's Guide to Glacier National Park," Gordon Edwards describes it as follows:

The climax of the Northern Lewis Range in Glacier National Park is Mt. Cleveland, the highest peak in the Northern Rockies of the US. The Sierra Club who placed the register on the summit in 1924 indicated the nature of the climb by writing in their 1925 Bulletin that their consensus was "That the ascent of Mt. Cleveland involves all the difficulties and hardships of the Red Kaweah, Mt. Whitney, and Mt. Shasta combined."

Although Mt. Cleveland is only a little higher than several other peaks in GNP, the summit views impart a feeling that you are vastly above everything else. To the north, south, and west lie all the giants of the Rockies of British Columbia, Alberta, and Montana. 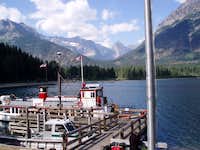 It is possible to approach Mt. Cleveland from within G.N.P., however, it is much easier to drive into Waterton Lakes Park in Canada and then take the shuttle boat to the south across Waterton Lake to Goat Haunt.

You must have a permit and attend a class (video) to stay at any of the backcountry campsites within G.N.P. Half of the permits are reserved in advance and the other half are issued on a first come first serve basis, no more than 24 hours in advance. Additionally, there is a fee to enter G.N.P. and yet another fee to enter Waterton Lakes Park. You are required to present a passport when entering Canada and once again once you reach Goat Haunt back in the U.S. (I did not have my passport in 8/07 and was allowed entry).

For more information on campsite availability and reservations, click HERE 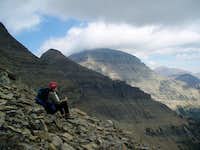 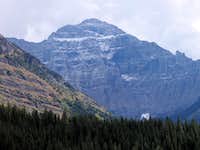 -West Face Route: Edwards describes this as the standard route. It was first climbed in 1924 by members of the Siera Club. It is eight miles and about 6100 vertical feet from Goat Haunt. Only two of the eight miles are by human trail. Many people have had route finding issues on this route.

-Stoney Indian Route: This route was first decsended in 1937 by another group of Sierra Club members who had climbed the West Face route, but were looking for a short cut to their campsite at Stoney Indian Lake. This route entails a scramble up a large scree slope, a traverse across the exposed east side of Stoney Indian Peaks, and then a 3rd/4th class scramble up the summit block. Many people believe this is the most scenic, interesting, and straight forward route on Mount Cleveland.

-Southeast Face Route: This route was first climbed in 1983 by Ranger Terry Kennedy and his brother Dan Kennedy. It involves an approximate 10 mile hike from the Chief Mountain Customs Station to Glenns Lake. Bushwhack up Whitecrow Mountain Ridge. Traverse to the Whitecrow Glacier and then cross it to reach the Southeast Face of Mt. Cleveland. Then, simply climb 2800 vertical feet of steep snow and ice to the top.

-The North Face: The 4,000 foot North Face of Mt. Cleveland is an intimidating sight. Few people have attempted this route over the years. It was first climbed in 1971 by a group of Minnesotans. This first group traversed around the final summit pyramid to reach the summit. In 1976 a second group of individuals climbed the entire North Face route in 18 hours. The route involves bushwhacking from the Goathaunt Lookout trail to the Northface, climbing a deep couloir, and then navigating numerous gullies, spires, ridges, ledges, and steep scree slopes. Edwards describes it as follows, "It looks easier than it actually is, but remember how FAR it is to the great shelf that crosses the face not far below the summit! This is a major mountaineering project, and should not be taken lightly."

I found the backcountry rangers at G.N.P. to be incredibly helpful. There are also many knowledgeable folks that will help you at Rocky Mountain Outfitters in Kalispell. The phone number for the Apgar Ranger Station to obtain additional permit information is (406) 888-7857.

Mid-July through August. One of my attempts was near the end of June. There was still too much snow on parts of the narrow ledges of the Stoney Indian Peaks to allow safe passage. Another attempt was in early September. It snowed hard and we found the summit pyramid covered in snow and ice.

The book The White Death, Tragedy and Heroism Inside an Avalanche Zone by McKay Jenkins tells the story of five young climbers who were swept to their deaths in December of 1969 while attempting to climb Mt Cleveland's West Face. Outside On-line published an interesting article, also by McKay Jenkins, about this incident, And None Came Back. A successful winter ascent of Mt. Cleveland was not completed until March of 2005 when local climbers Josh and Isaac Mohler summited, it was Josh's fourth attempt.


In "A Climber's Guide to Glacier National Park" Gordon Edwards states that it is possible for conditioned climbers to leave the head of Waterton lake at 7am, climb Mt. Cleveland, and make it back to catch the boat later that afternoon. That's a little too ambitious for most folks that take two or three days to complete the climb, but if speed is your thing, the following may interest you:

[img:289131:alignleft:small:]The unofficial speed climbing record for Mount Cleveland is an amazingly fast 90 minutes, completed in the winter no less. Wild life biologists in Glacier National Park affectionately refer to this fiery little mountaineer as "M3", one of the many wolverines outfitted with radio tracking collars in the park. M3 crossed Glenns Lake, climbed to the top of Mount Cleveland, and then continued his journey down the other side of the mountain and into Canada. If you're not lucky enough to see a wolverine running across the summit, you might just see one of the park's many grizzly bears, who routinely climb to the top of the mountain. According to one of the park's rangers, these bears climb the peak to dine on a species of moths that call the top of Mt. Cleveland home. To read more about the adventures of M3 and his furry partners, check out Douglas Chadwick's article, The Wolverine Way.