Note: I was informed by Ken J on August 30, 2018 that Baxter Gulch Trail was completed and open to the public.

With 2456 ft of prominence, Whetstone Mountain is Colorado’s 40th most prominent peak. It’s relatively low elevation however, makes it number 982 on the list of Colorado’s highest peaks. It rises abruptly above the ski town of Crested Butte in the Elk Mountains of central Colorado. Private property blocks direct access from Crested Butte to Whetstone Mountain via its northern and eastern slopes. Since 2011, construction has apparently begun on a publicly accessed trail that would climb Baxter Gulch connecting Route 135 to Carbon Trail (which starts on Ohio Pass Road to the west of Whetstone Mountain). When I was in the area in July 2017, a sign at Baxter Gulch Trailhead said that the trail only went to Baxter Creek and hikers were supposed to turn around and return at that point. The sign gave an expected completion date in fall of 2017 (if you have any updates on this, please let me know). For this reason I approached Whetstone Mountain from the west, via Carbon Trail which took me to a 10700 ft saddle where I left trail and found my own way to the summit of Whetstone. 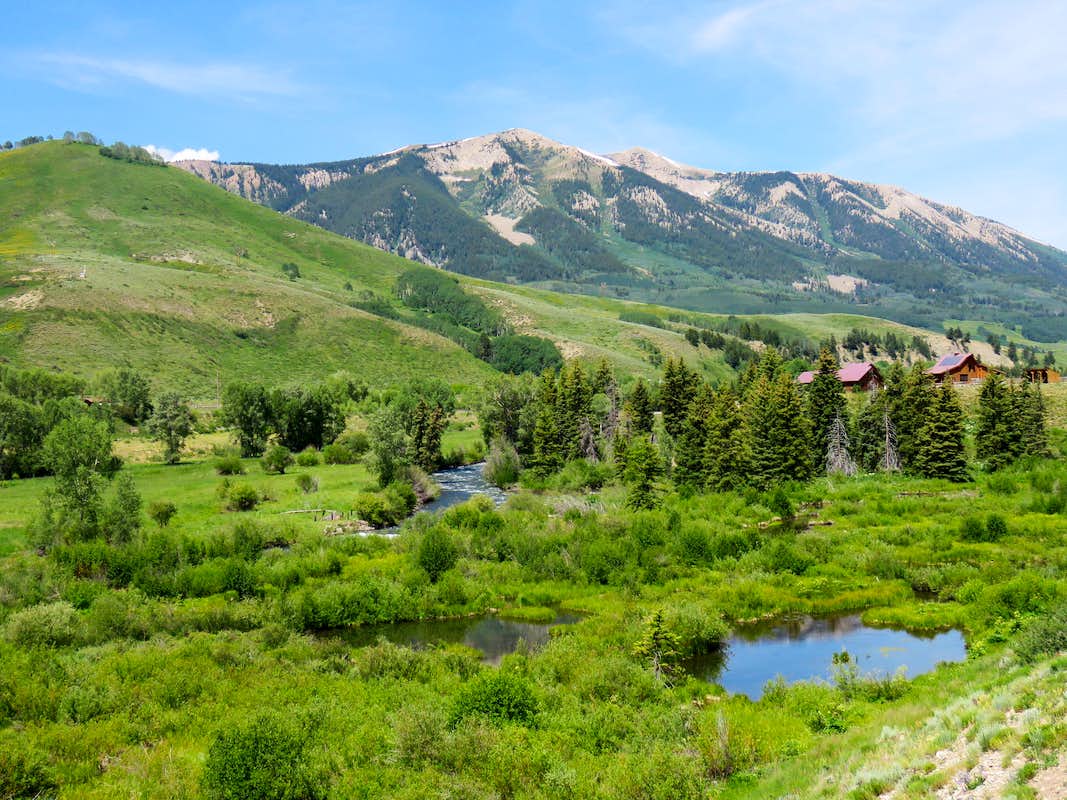 From the intersection of Route 135 and Whiterock Ave (Route 12) in Crested Butte, Colorado, turn west onto Whiterock Ave and drive a few blocks to the end of town where the road becomes Kebler Pass Road (Route 12). Drive this road around 6 miles west to just before Kebler Pass and turn south onto Route 730 (Ohio Pass Road). Drive 3 miles south going past Ohio Pass to a sharp switchback. A few hundred feet after the switchback, Carbon Trail can be seen to the east of the road starting as a 4 wheel drive road. You can park on the side of Ohio Pass Road. All of these roads are closed in winter. Kebler Pass Road is partially paved and is passable by any vehicle under dry conditions. Ohio Pass road is rougher. (I drove an SUV but did not need to use 4WD).

From the above mentioned parking area on Ohio Pass Road, head east of Carbon Trail (Trail 436) which starts as a rough 4 wheel drive road going through pine and aspen forests. You will have good views of the West Elk Mountains behind you to the southwest. 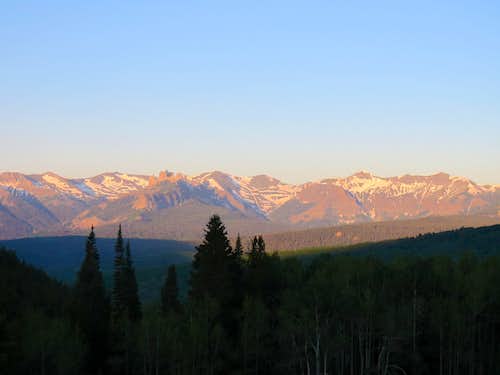 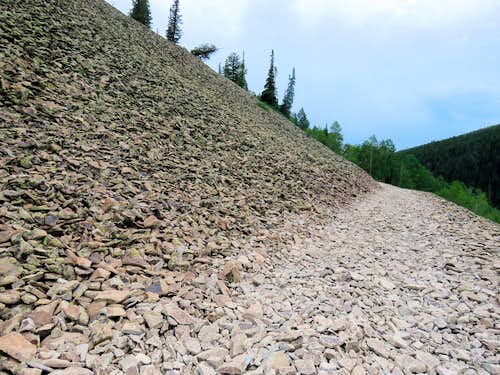 After half a mile or so, the road turns into a trail. Ohio Peak behind you to the west. 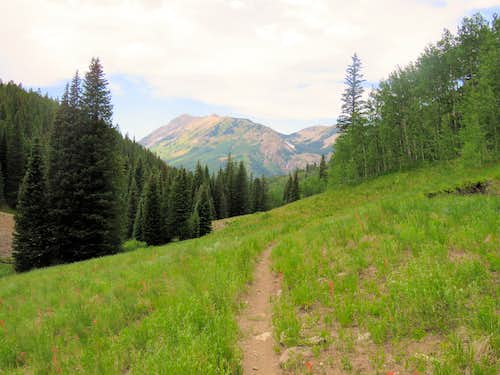 The trail slowly goes up to a broad saddle at 9940 ft between Carbon Peak to the south and Mt. Axtell to the north. It then begins to go downhill to a minimum of 9580 ft where a big meadow opens up. The west face of Whetstone Mountain will appear in front of you. 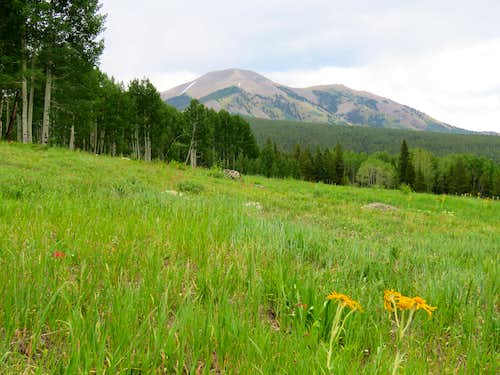 Carbon Peak from the same meadow. 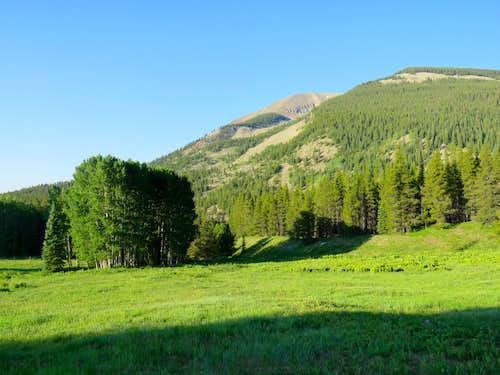 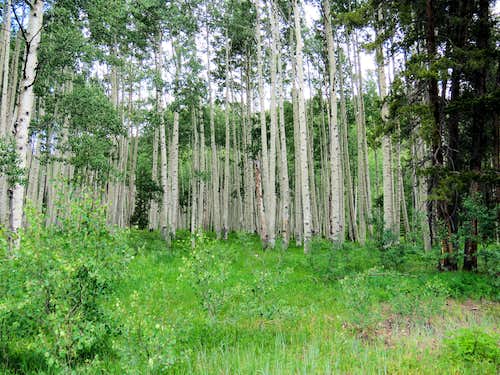 Nearing a 10700 ft saddle to the west of the summit of Whetstone, I left the trail and began walking in a pine forest toward the summit which was not visible from the trail or the forest. If you choose to come this way, you must be able to find your own way. Finding my own way in the pine forest. 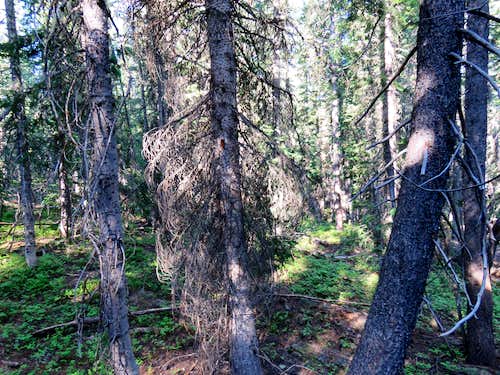 Finding my own way in the forest

After about 0.25 miles in the forest, the trees thinned out and the summit of Whetstone appeared. 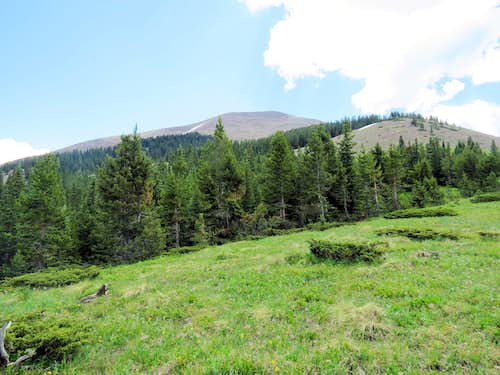 Going up a somewhat of a steep scree slope, a thin forest appeared again. I was able to hike up the beautiful grassy slopes among the trees. 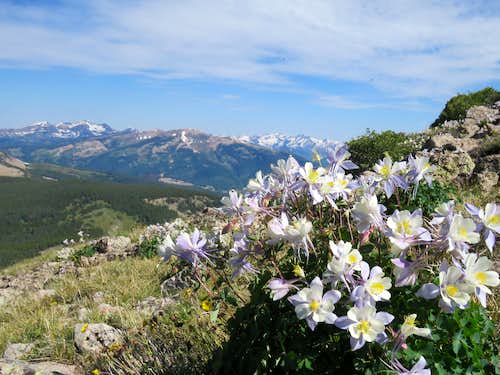 A short hike over a boulder field led to the summit. Views from the summit.