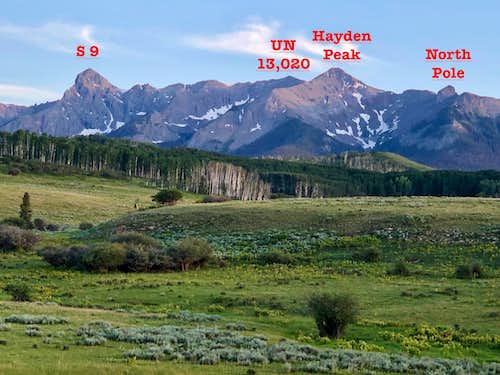 Hayden Peak is an unranked high 12er, named on most maps. It is only 0.29 miles away from UN 13,020, and rises 207 feet from the saddle between those two peaks. If it would be 300 feet, it would be considered a ranked peak per Colorado standards. It is a worth to summit this unranked peak as well. One can get great views of North Pole and it is easy to desdent its wide south slopes into the Deep Creek Basin.

Deep Creek Basin and its peaks above are not often visited. The peaks are relatively low in elevation (low 13ers) and Colorado having so many peaks, which are higher and easier to access keep this peaks rather a rarity. Per climbing log from summit register - only about 1-2 entries per year.

2019 also had complicated access since Deep Creek Basin was covered in avalanche debries and walking through piles of dead trees made progress hard. 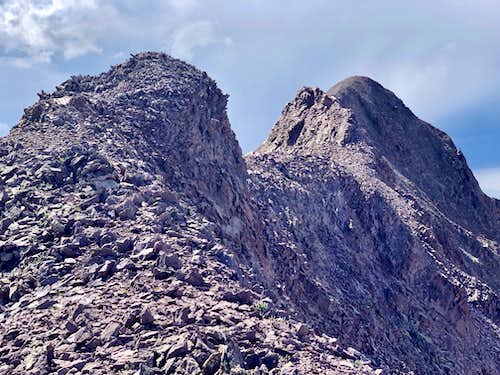 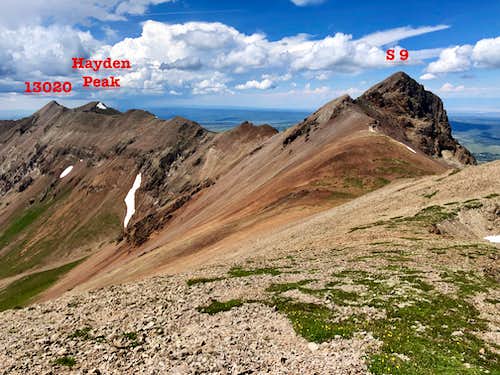 Overview of a long traverse

From State Highway 145 at “Society Junction”, 4 miles west of Telluride, drive on 145 just a little east past the junction and turn left (north) onto “Airport Road” = “the Last Dollar Road”, # 638.

Follow the road uphill and around a sharp turn at the head of a drainage. The road continues west past the Aldasoro Ranch entrance. Bear right when the Airport Road turns off for the Telluride airport. It becomes a good dirt road here - no need for 4 WD vehicles. Continue NW and in under a mile, park at the on the right in a trailhead parking area with a small corral. The Uncompahgre NR map indicates that this is the beginning for trail # 418. There is a sign for Deep Creek and Whipple Mountain Trails. 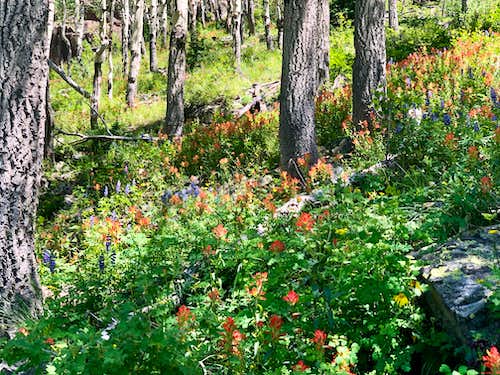 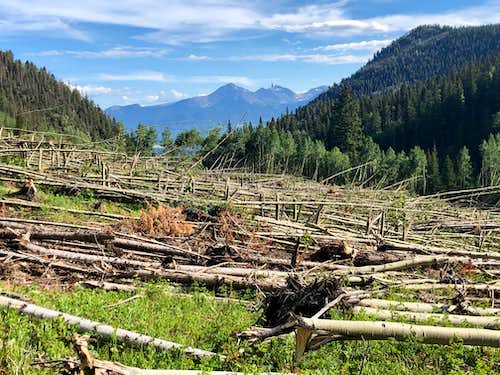 Avalanche debris
From the trailhead, follow trail # 418 marked as Deep Creek/Whipple Mountain Trail for a short distance on an open grassy slope. It then switchbacks briefly to the south and then back north to join an old roadbed beside a diversion ditch in an aspen forest. Follow this ditch for nearly a mile to where it crosses Sheep Creek. Past the creek, the trail turns west, still contouring, and then after about 200 yards, makes a sharp turn to the north. Continue along the ditch until you come to a place where the trail splits. Turn off from the big trail (almost like a 4 WD road) west on a well marked Whipple Trail - single trail. Cross the Deep Creek over a bridge, continue up and down into deep creek drainage. Eventually, you come to a place where the trail splints with a main trail going towards Whipple Mountain/Pass and a smaller trail (unmarked on most maps) leads higher into Deep Creek Basin. The trail was hard to follow. I remember going there in 2016 and it was easier, 2019 - there was a lot of fallen trees, avalanche debris and it made progress slow.

I opted out to re-climb S 8 and continue along the ridge towards S 9. The ridge between S 8 and S 9 is not technically difficult. The descent into the saddle was easy and fast. There was a one little obstacle, which I bypassed on its south side. I found a gully filled with loose scree on the southern side of S 9 and ascended up. Descended the same way and continued onto Unnamed 13020. The going was obvious, nothing exceeded class 2 and went pretty fast. The views looking back towards S 9 were spectacular. There were a few small bumps along the ridge. The summit of S 10 had a small cairn and a glass summit register. The descent NW towards Hayden Peak and the ascent of Hayden went quickly. Hayden Peak has a US geological benchmark on its summit and a cairn with another glass summit register. Descent of its southern slopes went pretty quickly, I eventually joined up with the route below S 8.

Hiking, parking at the trailhead, camping in the wilderness are free.
Mount Sneffels Wilderness rules apply: The following are prohibited: Entering or being in the area with more than 15 people. Camping within 100 feet of any lake, stream, or National Forest System Trail. Building, maintaining or using a fire within 100 feet of any lake, or stream, or National Forest System Trail, above treeline. Storing equipment, personal property, or supplies for longer than seven days.

Summer is the easiest with a nice approach mostly on trails into the basin, higher up hiking is off trails. Winter poses a lot more difficulties with a long approach in a deep snow and travel through an avalanche prone terrain. Always check for Northern San Juan Avalanche forecast prior venturing out there.

Trailhead for Deep Creek and Whipple Creek is slightly off Last Dollar Road. The parking lot is spacious. There are signs for no camping, but I would imagine that sleeping in the car would be pretty comfortable here.

Camping is hard in the close vicinity of Telluride. The closest designated campgrounds are at the “Town Park” on the east end of Telluride and the “Sunshine” campground south of Society Junction on SH 145. Click here for more information on Telluride Camping.