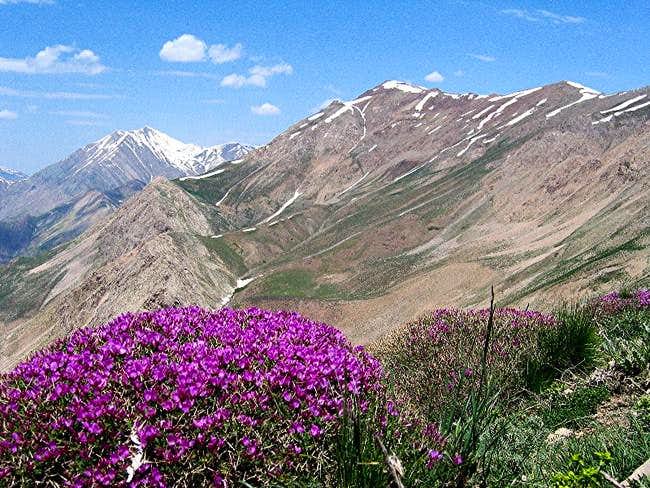 The summit of Khatoon Bargah consists of four high points on top of a ridgeline. The 1:50 000 map shows that the eastern three high points have an elevation of 3850 m (contour lines between 3840 and 3860 m) while the western point is 3877 m high. The schematic map (see the link above) actually treats the eastern-most high point as a separate peak and calls it “Darreh Pelk”. I, however, don’t think that this point qualifies as a separate peak so I have decided to lump all four points under the same name. When approached from the Yoonza Pass, Darreh Pelk appears as a prominent peak while the true summit of Khatoon Bargah gets lost among the other high points behind Darreh Pelk.

Theoretically, Khatoon Bargah can be climbed via its southern slopes above the Garmabdar Village but this seems to involve long slippery/scree/rocky slopes. A better option is to drive to the Yoonza Pass and follow the top of the ridgeline past the Oshtor Peak (and many other high points) to the summit of Khatoon Bargah. The area east of the Garmabdar Village (including Yoonza Pass), however, falls into the Lar River Protected Zone. Entering this zone requires a permit. (See Red Tape below).

From the summit of Khatoon Bargah, you can look west to see Kholeno the Great and the many other 4000 m plus peaks around it. The impressive wall of Kharsang Kooh #2 will be directly in front of you. To the east, the 5671 m Mt. Damavand rises far above the rest of the other peaks. To the south and southeast, you will find many 3500 m plus peaks including the 3964 m Mt. Tochal. The city of Tehran sits beyond this mountain. To the north, steep slopes drop down to the bottom of the Lar River Valley and then rise just as steeply to form another long east-west running chain of peaks with elevations between 3500-4000 m. 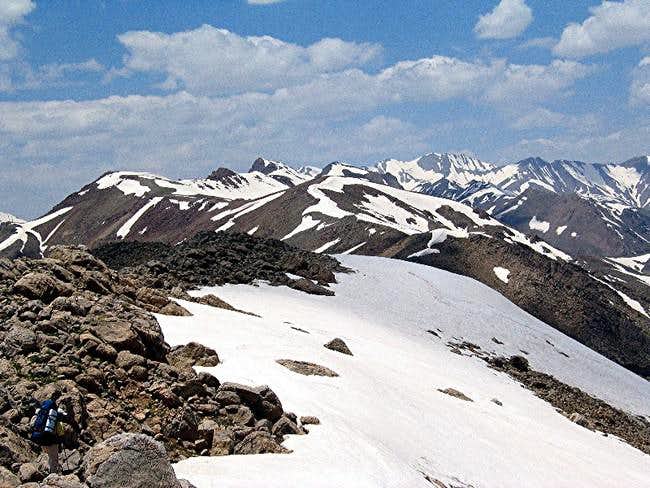 From northeastern Tehran, take the Babai expressway east and then take the Lashgarak expressway north up to Ghoochak Pass (1950 m). Follow the road north down the many switchbacks to the bottom of the Jajrood River Valley (1700 m). Drive 20 Km north to the main square in the village of Fasham (1950 m). Left (west) will take you to the ski resorts of Shemshak and Dizin. Turn right (east) and drive 15 km till the end of the pavement in the village of Garmabdar (2450 m).

If you have obtained permission (See Red Tape below), you can drive past the gate up the dirt road (passable by most/any car) to the Yoonza Pass (3100 m).

Khatoon Bargah Peak and the village of Garmabdar fall outside of the Lar Protected Zone and will not require any permits. The area east of Garmabdar Village, including Yoonza Pass however, do fall into this zone. Our permit was obtained by my guide and I neglected to ask him where he got it from. Any guide should be able to get this for you. It seems to me that the purpose of the protected zone is to discourage illegal hunting and to restrict access to the scores of the residents of Tehran that flood these mountains on the weekends. Hikers, bikers etc should have no problem obtaining a permit.

Easiest in summer. The road to Yoonza Pass is closed in winter.

If you are not familiar with these mountains, you will benefit from the presence of a guide. I used Araz Adventure Tours and was very satisfied with their services.