Sarakchal is one of summits in central part of Alborz Mountains.

Here is Introduction to Central Alborz Mountains Thanks to nader

Sarakchal is located 24 km north of Tehran. The most important village near to it is Shemshak. It is located in the north of Shemshak and also in north of another village named Roteh. 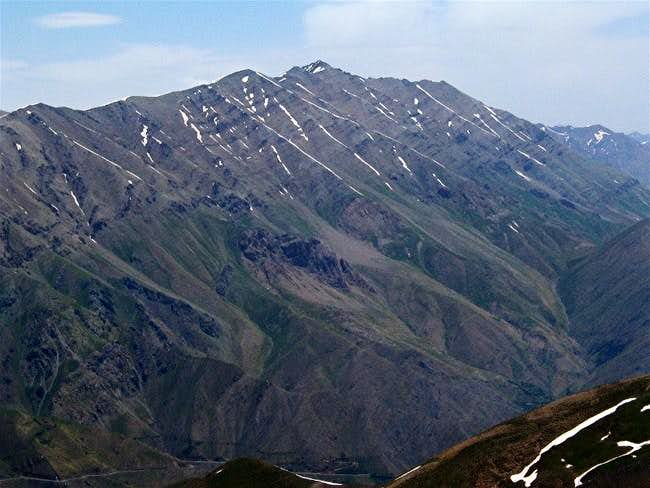 This summit with three other more than 4000m summits are alongside a ridgeline starting from Koloon Bastak(4170m) at west side and end to Sarakchal(4210m) at east side.

It's south face is against to Shemshak and in the north face there is a saddle named Varzab which is located between Sarakchal at its south and Borj(4326m) and Kholeno(4387m) at its north.

From south it is connected to Paynesum summit (3350m) and Abak summit (3520m) through a saddle named Lajani. Lajan in Persian means a sort of mud and the name (muddy) is due to the fact that the area is muddy from a spring nearby.

This summit is a resource for two rivers, Velayat-rud at north-west and Laloon at north-east.

Here is map of area peaks

Sarakchal is located at lower left corner of the map.

Here is a photo of northern face of Sarakchal taken by nader: There is a 1st defree road from north-east part of Tehran to Shemshak. this road is passing from Lashgarak , Ushan , Fasham and Maygoon. Please note that there is a siding in Fasham, you have to choose the left one, to Maygoon on north-west direction.

On the north-east side of Shemshak , starting from Sepidestoon, a walking route goes to a saddle in southern face of summit, which is named as Lajanee #2. The southern climbing route starts from here.

May until October is the good time. During July it is more colorful. In October it is also more beautiful.

Anywhere. No problem for camping.

There is a shelter on the Southern face of summit. The shelter is named "Lajani Shelter". It is made of stone, cement, and metal sheets. It has been built on 1985. Later there has been some minor changes including installation of alluminum windows.

There is no water available in the shelter and there is no nearby spring/river.

In summer weather is usually clear. Expect some thunderstorms in spring. During winter, there is continuous threat of avalanche, and for reaching the Lajani shelter, you should use the ridgeline instead of the usual route from the valley.