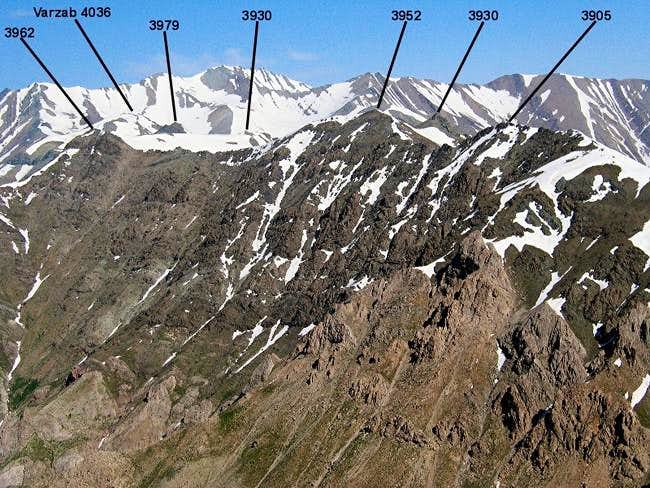 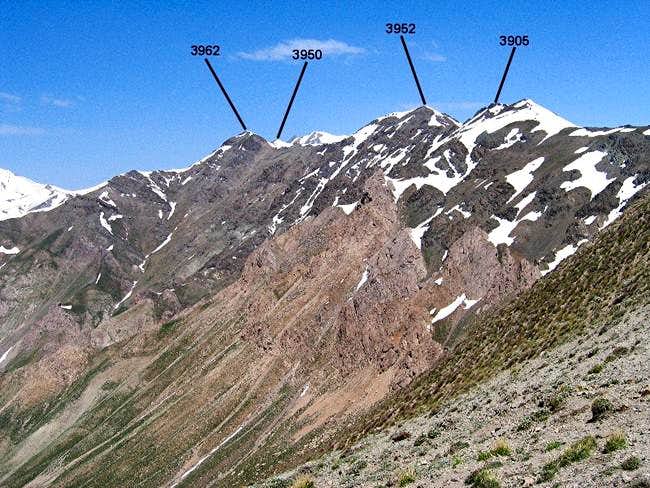 Most sources designate Peak 3952 m or Peak 3962 m as the summit of Jahneston. For whatever reason, Peak 3979 m which is the highest of them all, remains nameless.

These peaks can be accessed via their southern slopes above the villages of Abnik or Laloon. The slopes below the eastern peaks (above Abnik Village) seem to be rocky and difficult to negotiate. A better option is to start at the Laloon Village and hike along the banks of the Varzab stream to reach a small canyon known as “Tangeh Varzab” (Varzab Narrows). After that, you will go over beautiful meadows to a saddle between Peak 3979 m and Varzab #1 Peak. From there you can follow the ridge-top east to access the rest of the peaks. Be ware that reaching Peaks 3952 m and 3905 m requires much Class III scrambling.

From the summits of Jahneston Peaks you will have good views of much of the eastern parts of the Central Alborz Mountains. To the east, the 5671 m Mt. Damavand reigns supreme, while to the west, the 4387 m Mt. Kholeno the Great and its nearby 4000 m plus peaks will be in good view. The 3964 m Mt. Tochal which rises directly above the city of Tehran will be visible to the southwest.

>>>Vegetation on the lower slopes

From northeastern Tehran, take the Babai expressway east and then take the Lashgarak expressway north up to Ghoochak Pass (1950 m). Follow the road north down the many switchbacks to the bottom of the Jajrood River Valley (1700 m). Drive 20 Km north to the main square in the village of Fasham (1950 m). Left (west) will take you to the ski resorts of Shemshak and Dizin. Turn right (east) and drive 7 Km to the village of Zaygan (2250 m) and then turn left (north) and drive a side road about 4 Km to the village of Laloon (2400 m).

Easiest in summer. I personally like late June/early July when there is still plenty of snow on the mountains and the lower slopes are covered with green grass and flowers.