TOPOGRAPHICAL REMARKS By analyzing the structure of the mountain (five crests and as many faces) in a clockwise direction starting from the East to return to the East.
East-norteast Ridge:
long ridge of 950 meters that descend to Arpisson; rarely ascent. Ends with a triangular wall of 500 meters, still do not climb, above the moraine.
East-southeast Slope: small triangular slope of about 270 meters above Lake Peckoz; useless and tiring climb but useful in descent, if with snow via a beautiful "slide". Generally it is simply "lapped" just claim and skip in the ascent of the terminal part of the S-SE Crest before it reaches the mule track from the S-SW side. Knowing how to search, in its middle part there is a small and fresh spring of water in a little ravine in the transversal band of rocks in the middle of the slope.
South-southeast Crest: via a small easy crest that rises from the Hill Carrel (at the Federigo Bivouac) of 230 meters; likely route of the first climber, certainly for the first winter. The same goes up on a small earthy track, which further up breaks into an area of rotten rocks that progressively lean on the right or East-southeast side, leaving the South-southeast side on the left (South). Just above the hill you can hear the Echo coming from the North Face of the Emilius.
South-southeast Slope: very narrow grassy-rocky slope that drops above the Grand Scez small tableland, near the fork of the two paths to Becca di Nona or towards Colle Carrel. Useless and dangerous to climb it consists in a rocky slope, often covered by dangerous grass, above the small Gran Scez plateau (2.526m), just above the junction of the two preceding paths on altitude of 2.778m. Is a little in the shape of a narrow and very elongated obtuse triangle S-SE Wall of about 350/65 meters as a small grassy-rocky face above the squared boulder of Gros Scez or the Grand Sax, so called for the local inhabitants.
South little Crest: divides the narrow side prior to the much more extensive or South-southwest. It can be useful in case of snow, allowing a more rapid ascent and also safe, as well as less boring and more fun, also because it allows you to climb, albeit easily for several sections (I° and II°), remaining above the South-Southeast Side or, better, between the latter and the mule track of the South-Southwest Slope. Definitely a choice for connoisseurs of the territory ...
South-southwest Slope: consists of several ribs alternating with grassy-rocky couloirs of which the most visible is the central one that from Plan Valé climbs directly to the Summit with over 700 meters of altitude; on Eastern margin salt an old mule track, built in 1860 for the laying of the great statue of the Madonna, which is the route most commonly used (at least until the construction in 1984 of the Federigo Zullo Bivouac at Carrel Pass). Already risen even in winter.
West-southwest Great Rib: Western margin of the previous ends on the West Ridge near the Top, was climbed for a one time mistake; totally inadvisable as it covered a lot of grass. In any case, once you have reached Plan di Valé, you have to turn left or NW towards some greyish and transversely elongated moraines; once you have reached and passed them, continue along the edge of the grassy ribbing-ridge until you reach the final rocks and the West Ridge.
West Ridge: long ridge of about 1.000 meters, which splits the altitude of 2.686 meters; you can go from Comboé or with a crossing to the North by Plan Valé, bypassing a rocky-grassy channel just beyond the West-southwest Great Rib. At the top of the previous rib meets near 120 meters from the Summit; from the rocky and vertical promontory (2.686m) down to the Northwest a cliff of 450 meters above Ponteilles. Extremely panoramic climb but inadvisable for the grass. 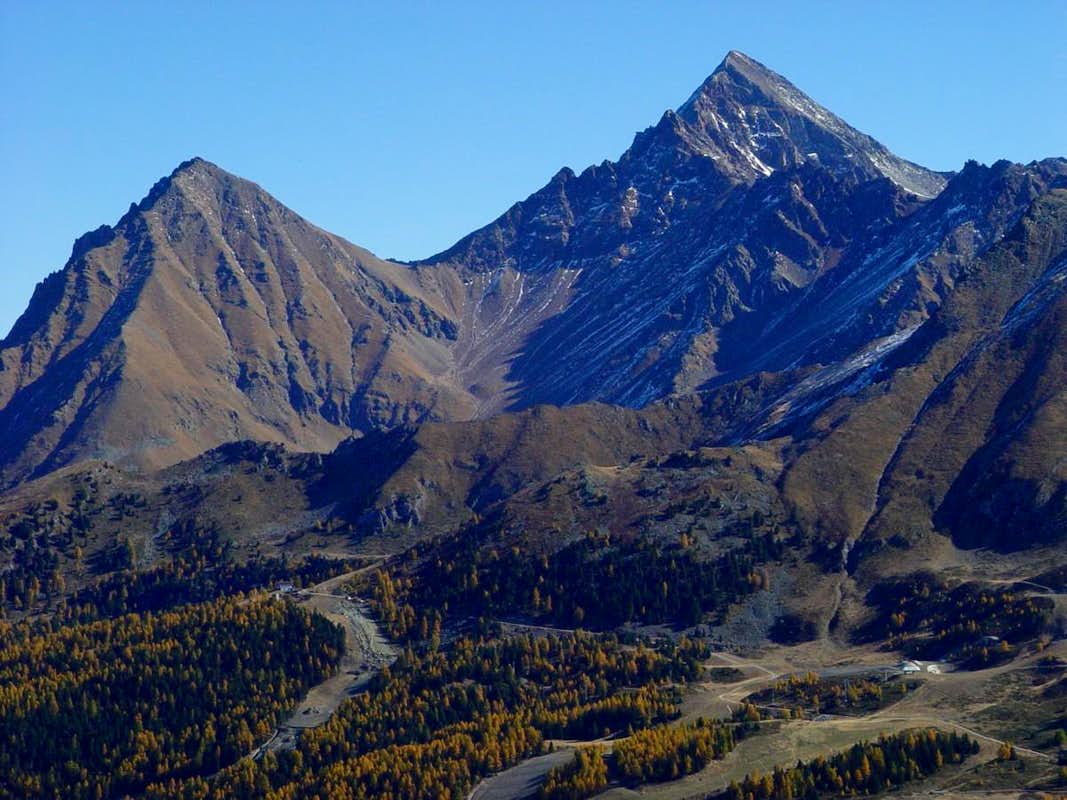 No restriction at all.

Remember that free camping is forbidden (except for emergency reasons, over 2.500m, from darkness until dawn).

I am greatly indebted to my friend "Osva" for all texts, detailed description of the routes and translation.