Njulla is located about 250 km (150 miles) north of the Arctic Circle, near the town of Abisko, in Abisko National Park. It's about halfway between Kiruna and Narvik, Norway.
Despite it's low elevation, the mountain stands out because of it's proximity to the main highway between Kiruna (Sweden) and Narvik (Norway).
Facilities are good, especially considering that it's in the Arctic.
The easiest route to the summit is the Ridonjira trail, steepness never exceeding about 40 degrees. The north face averages about 70 degrees pretty much all the way up,mostly class 4 scrambling. Haven't tried it out myself because of time issues, but i bet most of it is virgin. There is a cable car to the Njulla hut at 900 meters as well, but when we were there it was closed because of a lethal accident a week before, where one of the gondolas popped off. It had been a fuck-up by a temp worker not properly trained in how to secure the gondolas back on properly, which resulted in one death and 3 injured. 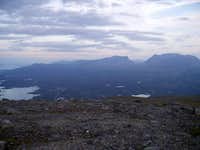 Of all the 'major' peaks in the European Arctic, Njulla is probably among the easiest accessible. There is a train service to Kiruna and Narvik from the Abisko Nat'l park station, and there are busses going there as well.
Kiruna is to Sweden what Fort William or Aviemore is to Scotland, and after ore mining has become less of a main economic pillar for the community, they've started cherishing their image as outdoor capital of Sweden. Kiruna has excellent connections to the rest of Sweden. The airport receives four flights a day from Stockholm, and one from Umea, Östersund, Lulea and Tromsö. Trains connect Kiruna with Göteborg, Stockholm, Boden/Lulea and Narvik. Boden, Lulea and Narvik have three trains per day, Stockholm two and Göteborg one. All off these trains stop in Abisko Turist.
From Abisko Turist (Nat'l park) it's less than one km (about half a mile) to the Ridonjira trailhead. Expect the lower Ridonjira valley to be relatively crowded in the summertime.
To get to the Ridonjira trailhead, go underneath the railway bridge, and take a right.
As soon as you cross the Abiskojakka River, take the first trail left, and follow it for about a quarter of a mile. At the point where the Ridonjira river flows into the Abiskojakka, is where the Ridonjira trail starts at the right. 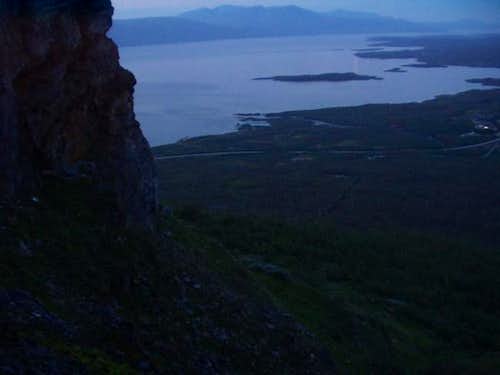 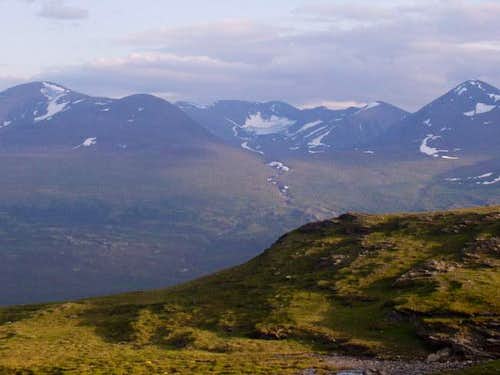 Hills to the south of Njulla

Considering it's latitude, I suppose it's best to climb anywhere from late May to Early September.
From early June to mid July the sun doesn't set, and from early December to mid January it doesn't rise, however, if there's a clear sky, the full moon reflecting on the snow will give you plenty of light to do your thing.
January averages -8C/15F in Abisko, July averages 15C/60F. On the summit, it'll be more like -15C/5F in Jan, and 7C/45F in July.
Averages, however, don't really mean a thing out here, especially during winter, it'll either be nice, calm and clear, with a temperature around -15C/5F or colder, or warm and stormy, with a gusty western breeze, blowing snow in your face with 40knots/75km/h, while decreasing visibility to 15m/50ft. Warm, in the Arctic is of relative value, and generally means temps around-, or slightly below the freezing point.
Treeline is at about 600meters/ 2000ft, and above that you'll be exposed to the elements, altough it helps that the Ridonjira trail is on the east side of the mountain, while most winds in this neck of the woods are coming from the west, especially the ones that bring nastiness.
Crampons are no luxury when walking the trail outside of summer.

No camping is allowed in the national park, but if you're in a secluded area, there is probably no one to enforce this rule.
At Abisko Turist (next to the station) is a camping ground, and there are two more down the Abiskojakka river on the Kungsleden trail to Kebnekaise.
Those are only useful though if you're spending more time in the park.
Njulla hut is a cable car station with restaurant but no accomodation. 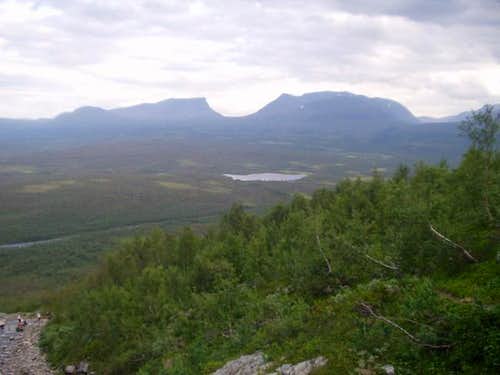 Do not disturb, do not destroy – that is the
basic principle of Sweden’s right of public
access. It is not an unrestricted right. Here,
you can read about the rules that apply.
Please note that the Swedish Environmental
Code places especially strict demands on those
who conduct organized activities in nature.

Respect others’ privacy
You may travel through the countryside on foot, bicycle,
horse or skis, and temporarily remain in one place, as
long as there is no risk that your presence or activities will
damage crops, tree plantations or other sensitive areas.
But you must respect the privacy of others, and you may
not cross or intrude upon private property.
Residents are entitled to be left in peace within the
areas immediately surrounding their homes, which are
not always fenced off. If private areas are open to view,
you must keep at a substantial distance so as not to
disturb. Also, your presence in the countryside should in
no way interfere with the activities of landowners.
Horseback riders must exercise special care. There is a
great risk of damage to the ground, especially when
riding in groups. It is not permitted to ride on marked
jogging, hiking or ski trails, or on soft and sensitive
ground. Mountain-biking also poses a risk of ground
damage and requires special caution. You may cross fenced
grazing land and the like, only if you do not damage
fencing or disturb livestock. Close gates after passing
through them in order to prevent the escape of livestock.

Motor vehicles not allowed
There is no right of public access for motorized vehicles.
Sweden’s Terrain Driving Act forbids the operation of
cars, motorcycles, mopeds and other motor vehicles on
terrain not covered by snow. It is also forbidden to operate motor
vehicles on private roads that are closed to traffic. Such
prohibitions should be clearly indicated with road signs
or some other means.
Normally, you may park along the side of a road if you
do not violate traffic regulations, damage ground or interfere
with landowners. But do not park in such a way that
you pose a traffic danger, or hinder others from passing.

Camping
It is permitted to set up a tent for a day or so on ground
that is not used for agriculture and is far from the nearest
dwelling. The closer to a residence and the greater the
risk of disturbing others, the more important it is to ask
the landowner for permission. The obligation to show
consideration is all the greater when a caravan or motorhome
is involved; this form of camping is restricted by
the Terrain Driving Act

Fires
Never light fires if there is the slightest risk of igniting
the surrounding countryside. Open fires are often forbidden
during dry periods. If uncertain about conditions and
requirements, contact the local municipality’s fire brigade
or tourist bureau. If you do light a fire, extinguish it
thoroughly with water. You may be subject to fines and
damages if the fire spreads.
Never light a fire directly on rocks. It may cause them
to split, and leave ugly scars that never heal.

Do not litter
All sorts of littering are forbidden in the countryside. A
cigarette butt in a dry summer forest can destroy resources
worth millions. Glass, tins and bottle caps can
harm both humans and wildlife, and plastic bags can
cause great suffering to animals that ingest them. For this
reason, bags full of litter should never be left beside a
rubbish bin if it happens to be full.

Blossoms and berries
You may not take such items as twigs, branches or bark
from living trees, including birches. Obviously, you may
not take entire shrubs or trees, either. But you are allowed
to pick wild berries, flowers and mushrooms, as well as
twigs and branches that have fallen to the ground.
Certain flower species are so rare that they risk becoming
endangered. These species are protected and
may not be picked. Information about them is available
from county administrative boards. Orchids are protected
throughout Sweden.

Bathing and boating
You may bathe, moor a boat and go ashore nearly everywhere.
The only exceptions are grounds of private
homes and special areas that are off limits, such as sanctuaries
for birds and seals. Otherwise, the same principles
of consideration apply as for camping. Boats may
only temporarily be moored to someone else’s pier, and
then only on the condition that they present no obstacle
to the owner. If in doubt, contact the owner.
You are free to travel by boat on seas, lakes and watercourses.
Note, however, that special prohibitions may
apply, such as speed limits and entry restrictions. Those
who operate motorboats are under an especially great
obligation to show consideration.

Hunting and fishing
Hunting and fishing are not included in the right of public
access. You may fish freely with rod and other handgear
along the Swedish coastline – except for salmon-fishing
along the coast of Norrland – and in the five largest lakes:
Vänern, Vättern, Mälaren, Hjälmaren and Storsjön.
Fishing in all other waters requires some form of permission,
e.g. a licence. Always inform yourself of the rules
that apply for the waters that you want to fish. Never
leave hooks or lines in nature – they can be death traps
for wildlife.
You must leave the young and the dwellings of wildlife
in peace; and you may not take bird’s eggs, etc., which is
classified as hunting. All wild mammals and birds are
protected, and may only be hunted in accordance with
Swedish hunting law. 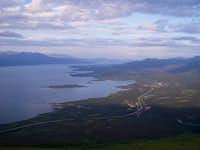 Within the national park it is forbidden to:

* establish facilities for storing supplies and materials, including rubbish
* run electrical or other lines in the ground or through the air
* construct paths or roads
* construct or enlarge buildings or other facilities
* conduct military activities
* conduct scientific studies
* conduct commercial activities
* dig, excavate, fill, bore, chisel, paint, blast or in any other way damage the ground or rocks
* remove minerals or other geological materials
* break off branches of, cut down or in any other way damage dead and living trees, brushwood or shrubs
* introduce plant or animal species
* gather or dig up plants
* gather or trap insects, fish or other animals, or in any other way disturb animal life
* hunt or fish
* operate motor vehicles other than on designated roads, snowmobile trails and in parking areas land aircraft
* operate motorboats
* tent at other than designated sites
* ride horses
* bring dogs into the park
* enter marked-off sections of land and water in the Abiskojåkka Delta during the period from 1 May–31 July every year
* set up notice boards, posters and the like
* set up orienteering checkpoints or marked trails.

In the event of special circumstances, the Swedish Environmental Protection Agency may declare exceptions to these regulations.

Notwithstanding the prohibitions noted above, it is permitted:

Effective date
Proclamation SNFS 1987:7. This proclamation shall come into effect on 1 January 1988. Abisko is on most weather web-sites, including weather.com, wunderground.com and wetter.de
Just subtract 5-8C/ 9-16F from the temp, and double the wind, and those are your likely conditions at the summit.

*) The "daylight" mentioned in the table includes civil twilight, so it should be read as no darkness in May,June and July and 22 hours in December. For 4 weeks the sun actually doesn't rise in December and January, and for 6 weeks it doesn't set from the last week of May until the second week of July.
*) Abisko is at 350m ASL. For the Njulla hut, subtract 4°C, for the summit of Njulla, subtract 7°C, and triple for windchill in winter.