A hidden gem of a peak, Tepphaugdalstinden offers two ridge scrambles with a great isolated summit.  The long approaches and lack of skiable terrain secure solitude for the intrepid who may have already visited better known peaks in the region.

There are two approaches for Tepphaugdalstinden.  From the north is Tepphaugdalen (Tepphaug valley) or from the east approaching up Namdalen (Nam valley).

For both approaches from Tromsø: Drive on E8 out of Tromsø for a little more than 23 kilometers.  Turn left on highway 91 with ferry signs to Breivikeidet.

Drive: on highway 91 for about 11 kilometers until the road makes a sharp downhill left turn to cross the river.  A dirt road with a boom continues straight ahead.  There is room to park here.

Hike:Follow the dirt road for as long as it lasts, then endure about 2 kilometers of mire and scrub slogging staying on a wide shelf above the inner river valley.  Keep the bottom of the valley well to your left.  After reaching treeline, the valley flattens out and the stream should be crossed as the going is generally easier on the left bank.  Continue up the valley for a total of 7 or more kilometers, passing a tarn and reach a shallow lake.  From here, head up to the weak pass between point 1080 and Tepphaugdalstinden.  It's important to not try to contour up too soon, as it's needless talus slogging.  Once at the pass the lake at 788meters is below, and the southwest ridge is right in front of you.  The advantage to this approach is that the summit can be seen on the hike in, and it's a gradual scenic ascent.  There is a minimal amount of ugly talus hopping. 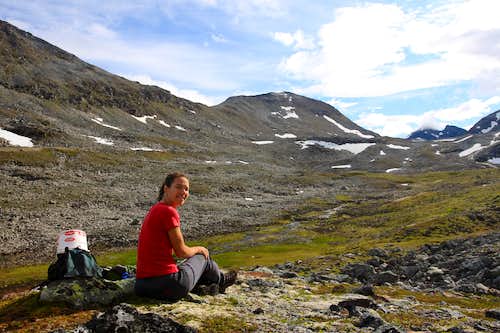 The pass is above her head in this shot, separating point 1060 from Tepphaugdalstinden. 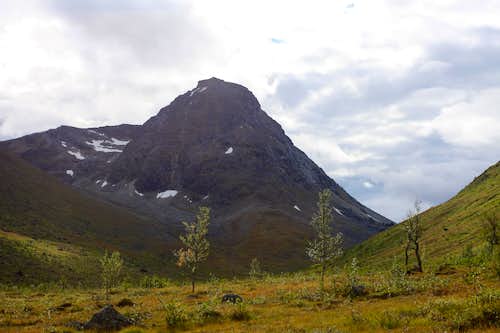 As seen from the northern approach, up Tepphaugdalen (Tepphaug valley).

Drive: on highway 91 for 17 or more kilometers until a sign for Sjursnes and golfbane (golf course, the world's most northern natural grass golf course for all you golfer\climbers out there).  Turn right onto highway 51 and drive past the beautiful lake Nakkevatnent.  Once past the lake, park among the hytte (cabins) and look for the main path that leads to the footbridge.

Hike: Do not try to ford the stream at the source close to the lake.  The footbridge is further downstream where the stream cuts a small but steep gorge.  There is a decent path after the bridge that winds through the many moraines at the entrance to Namdalen to the left of the stream.  Follow this to until the path fades out.  After about 4 kilometers from the bridge a hanging valley comes into view on the right.  There is a robust cascade pouring out of this hanging valley.  Head straight up the left side of the cascade to gain the hanging valley.  It's a steep, and rapid elevation gain.  Once in the valley, lake 788 is directly ahead, skirt around the lake on sketchy talus, the right side is steeper but easier.  Head up to the pass and onto the southwest ridge.  The advantage of this approach is that it is shorter.  To see pics of this approach, check the website KUGO 666 below. 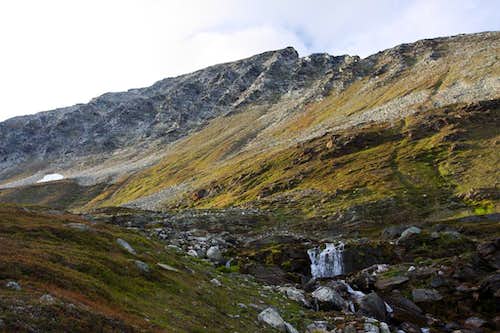 The view as one enters the hanging valley.  Southwest ridge is on the left skyline.

Note, according to Geir Jenssen (see website below) the best approach to climb the east ridge is from Tepphaugdalen, but take the left fork of the valley at the foot of the peak, instead of the right as is in the above description. 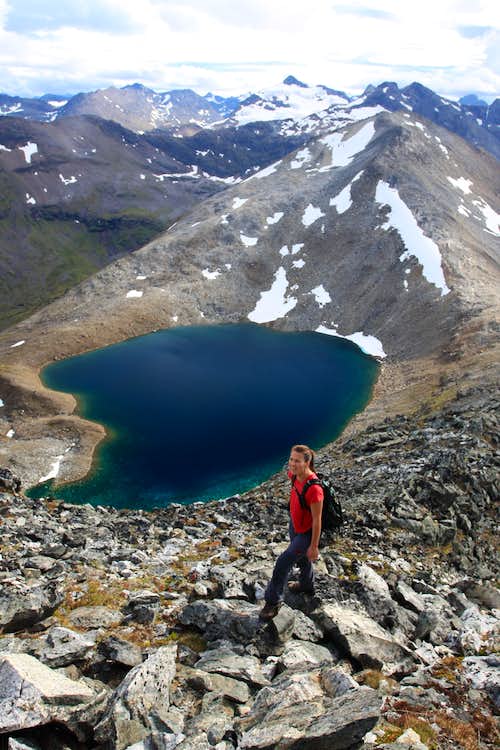 On the southwest ridge above lake 788

The easiest route is the southwest or west ridge at interesting 3rd class.  The shorter and steeper east ridge has also been climbed with reports of roped simulclimbing mixed with scrambling.

Tepphaugdalstinden by both ridges This website by Geir Jenssen, has a short general description in english of both ridges with good photos.

KUGO 666 This webpage describes the Namdal approach in Norwegian, and has many good pics.  For those looking through Kugo's website, his descent route down one of the south couliors was, (by his own admission), a poor choice. 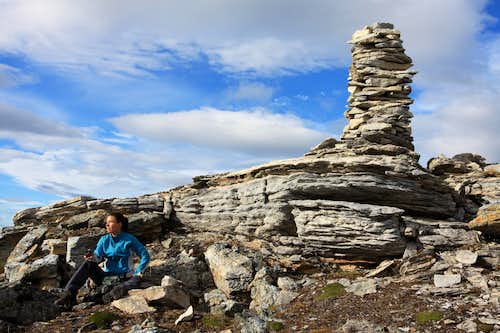 Summer: The later in summer the better.  Fewer bugs and drier mires on the approach.  Namdal is the least buggy approach.

Winter: Skiing decreases approach time, but both valleys are avalanche prone, especially the western slopes of Tepphaugdalen, and the hanging valley approach in Namdalen.  I don't know if the south face couliors have ever been climbed in winter, though they look great, the long approach stops most trying.

Backcountry camping is better in Tepphaugdalen.  There are several sandy spots around the lakes and tarns in the valley.  Commercial camping can be found in Ramfjord.