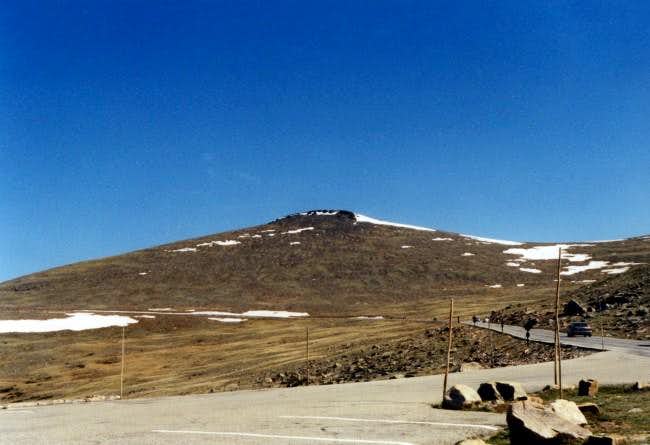 Sundance Mountain is a part of Trail Ridge which runs through Rocky Mountain National Park . This peak sits across a valley south of Ypsilon Mountain , Mount Chiquita and Mount Chapin . It can be viewed from the Trail Ridge Road, Moraine Park, and the Alluvial Fan to the east. It is of a special geologic formation because it is what used to be the land at the base of an ancient mountain range. When the Rockies were formed, it was thrusted upward with the rest of the range and now stands as evidence from a previous geologic time period. Sundance is the highest point on Trail Ridge and gives wonderful views towards Longs Peak , the Mummy Range, and the Never Summer Range . Views extend in all directions from almost anywhere on the Trail Ridge though. To the east, just over the foothills, you can see the vast expanse of the great plains stretching as far as the eye can see on a clear day. To the north can be seen the ranges of Wyoming. To the southwest the high summits of the Arapaho National Forest can be seen as well.

All climbs are class 1-2, except for the colouir on the north side of the mountain as well as the Sundance Cirque. I've never climbed the colouir route so if anyone has any information it would be greatly appreciated. Distances vary for the West Ridge Route though, depending on where you start. Sundance Mountain is a less traveled peak in terms of hiking which makes it perfect if you're seeking solitude in Rocky Mountain National Park. From the summit you can stand and watch the hoards of cars travel by on the Trail Ridge Road. If you travel the east ridge route you'll likely not find anyone but the lonely elk grazing on the lower slopes of the mountain. The views stretch farther than almost any from another mountain in the park. Also, if you're looking for wildlife, it won't be hard to find on Trail Ridge. Sundance Mountain is a wonderful peak and the unparalleled views make the hike well worth your while.

Trail Ridge Road was originally an Arapaho Indian trail that crossed the park to reach the plains on the eastern side of the range for hunting bison and other animals. The road is a part U.S. route 34 which connects Estes Park to the Kawuneeche Valley at the headwaters of the Colorado River on the west side of the park. Trail Ridge Road is also the highest continuously paved road in America as it stretches for eleven miles above tree line in Rocky Mountain National Park and is designated an "All-American" highway. The road's highest point is at 12,183ft. midway between the Lava Cliffs and the Gore Range overlook. The road is usually open between the end of May and the middle of October depending on snow conditions. Snow drifts on the Trail Ridge have been known to reach heights between 20 and 30 feet. The road also crosses the Continental Divide at Milner Pass near the Colorado River headwaters. Views from the road extend across the entire park and the ridge is one of the best spots from which to view the entirety of the park. 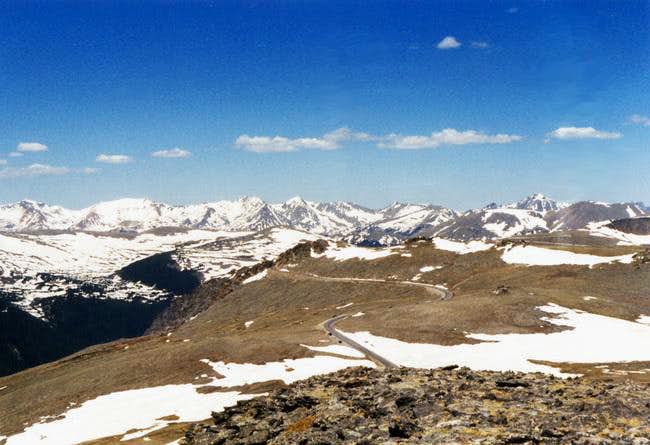 Tombstone Ridge is considered a part of Trail Ridge, but is more like an extending ridge from Sundance Mountain. This ridge extends for about two and a half miles to the southeast. Its highest point of elevation is 11,620ft. There is a trail which ascends/descends Tombstone Ridge's entire length. From Trail Ridge Road on the eastern side of Sundance Mountain the trailhead is called Ute Crossing. It is just to the east of Forest Canyon Overlook. The ridge is all alpine tundra for nearly two miles until it descends below timberline at Timberline Pass (11,484ft.). This trail in its entirety stretches for four miles to the bottom of the ridge.The Ute Trail's southeastern terminus, at the base of this ridge, is in Windy Gulch on the western end of Moraine Park.

These images are part of the new and truly amazing NASA imaging program which allows you to use satellite imagery and topograhic animation together. Better examples are coming!

From Denver:
Route 36 is the best way of entry to Rocky Mountain National Park from Denver. Route 36 leaves Interstate 70 and 270 from downtown Denver just northwest of Aurora.
Route 36 access from Denver International Airport:
In the airport follow the only road out which is Pena Boulevard. You will head west for four miles and then the road will turn south for about three miles where you will meet I-70. Get onto I-70 west and continue through northern Denver until you reach I-270 where you will need to exit. I-270 will merge momentarily with I-76 after about a mile. A mile after the merge you will reach the exit for Route 25. Exit here for the north and proceed on this road to the first exit, which will be for Route 36 north. Once on Route 36 follow it the entire way to Estes Park. Check out the state map below the big one!
From inside Rocky Mountain National Park:
There are two possibilities for reaching Sundance Mountain within Rocky Mountain National Park. You can take the shorter route and take your vehicle up Trail Ridge Road and park along the ridge somewhere, or you can turn off of Trail Ridge to the Fall River Road which heads toward the Alluvial Fan and Fall River Visitors Center. From Fall River Road you'll have to hike descendingly into the valley and the make the climb to the peak. 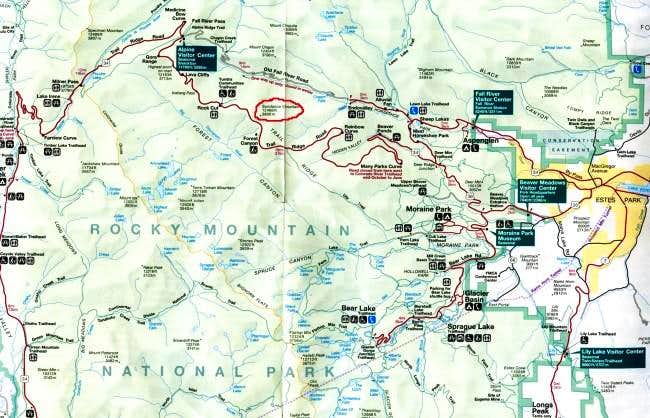 For climbing this peak, you must have your pass for Rocky Mountain National Park. The only seasonal closures would be due to snow across the Trail Ridge or Fall River Roads. If closed, all climbers should have snow gear and plenty of extras for the long hike. For wildlife conservation, the park asks that you do not approach any animals. Check the ranger station for all other national park restrictions that apply.

The best time of year for climbing this peak is from June to September. Snow can be and probably will be encountered even in some parts of those months, but snow is definate outside of the given time period.

For updated mountain weather conditions in Estes Park, Colorado go to:
weather.com
You can also ask at the ranger station for an updated weather forecast in advance of your climb.
Wind can be pretty nasty on the Trail Ridge, so take caution and be careful in looking at weather reports for your climb.