Lone Cone is a solitary and perfectly symetrical peak, and is the western-most of the major peaks in the San Juan Mountains. It is also the western-most 12,000 foot peak in Colorado. Since the peak stands alone, it is very prominent, and is a local landmark for several miles around.

I first climbed this peak on July 5 2001, which was the last day of the holiday weekend. On my holiday trip I saw probably 100 people on Mt. Sneffels, 50 on Wilson Peak, but had Lone Cone all to myself. The summit register indicates that the peak is climbed fairly often, but not near so much as the nearby 14'ers.

Updates, current as of July 2004: Unfortunately, some areas surrounding Lone Cone are affected by private property issues. The western approach may change in the near future, so please call the Norwood ranger station for current information. The eastern approach should always be open. 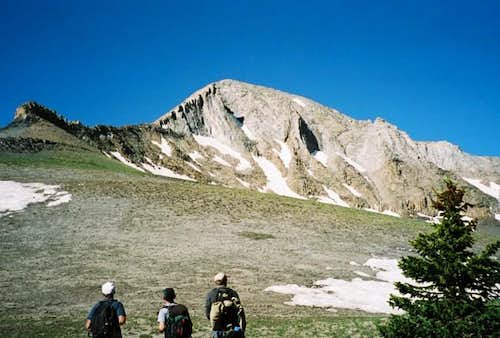 Lone Cone from the north.

There are several possible approaches to the peak, but many are blocked to public access by private property.

Note from Chuck Haywood: We tried to access the NW ridge via the described road on Sept. 1st, 2005. The 4 wheel drive access road to the north-west ridge has been trenched about half way up (at 2.3 miles), and a no-tresspassing sign has been posted. We did not know if the road was still a legal easement to the national forest, and elected to turn around and drive back to the north ridge access road.

Update #2 from Jaypkk (August 2007): The access road from the west is still barricaded at about 2.3 miles.

The following route is probably the easiest route that has (or had??) public access. A 4wd vehicle is recommended, having only a car will add 8 miles round trip.

From Norwood drive east on Highway 145 1.5 miles to 44Z Road. Turn right and follow the main road south. At 13.6 miles stay left on 44Z Road. At 16 miles bear left at the T, which is 31U road, and follow it south. At 17.7 miles take the 4wd road to the east (left). If you reach Acorn Ranch, you went too far. From the start of the 4wd road, obey the signs of no tresspassing and stay on trail. The road is accessible to the public, but you must not stop for the next four miles. The forest boundary is reached after four miles, and most cars can make it to this point. The road becomes FS 534. With a 4wd, take the first left and begin climbing. At 4.5 miles, stay left along FS 534. Stay right at the next fork, which is at 5 miles. Continue another .8 miles to a meadow and logged area. Park here.

North Ridge from the east and Devils Chair:

This is probably the most scenic route on the mountain because you will have great views of the rugged cirque on the north face of Lone Cone.

From Norwood, drive 1.5 miles east. Turn south on County Road 44Z (Lone Cone Road). Turn east after 11 miles onto County Road 44M (Beef Trail Road) and follow it to County Road 46M and turn right (south) onto 46M. Road 46M becomes FS 611 once you reach the Forest Service boundary. 2.8 miles after the boundary, turn right onto FS 612. Turn right again after 1.7 miles and follow FS 612 for another 2.2 miles. Park at the vehicle barrier and the old logging road that takes off to the right. This place is at co-ordinates N37°54.390' W108°14.488'. Passenger cars, driven slowly and with lots of care could make it to the trailhead, but a high clearence vehicle is certainly recommended.

This has the shortest hiking distance of the three routes, but is also a much more rugged hike. Expect a bit of excitment and routefinding if you attempt this route.

The trailhead is the same as the route of NW Ridge from the east and Devils Chair. 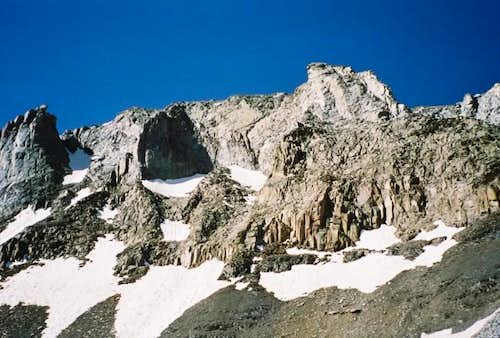 These are overviews only. See the route pages for much more detail.

The Northwest Ridge is the shortest and one of the easiest routes, as well as the old "standard route", but private property problems could render the route closed. 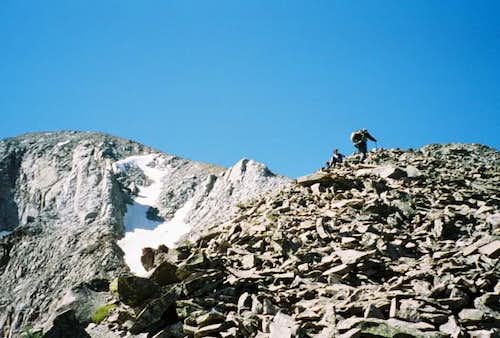 On the north ridge.

The North Ridge from the East and Devils Chair Route is longer than the NW Ridge Route, and may be the easiest over-all route. This route will probably become the new standard route because of private property issues on the NW Ridge. From the trailhead, the route follows minor trails and old roads to the Devils Chair, a huge rock glacier. The route crosses the rock glacier and climbs to the north ridge which is followed to the summit. 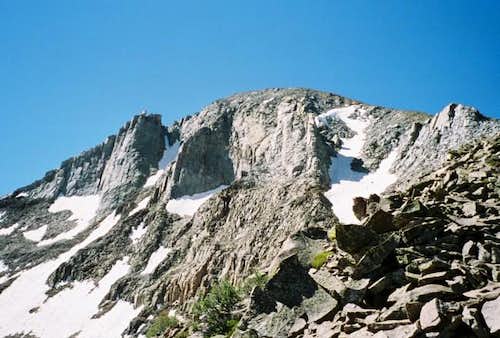 Northwest Ridge is to the right.

The Northeast Ridge is the shortest route, distance-wise. It is also the most rugged of the three routes described, and is a good class 3-4 scramble. From the trailhead, the route follows minor trails and old logging roads to the base of the ridge. The route then climbs up the ridge and follows it to the summit. There are many cliffs to bypass, and several sections where you may have to get down on all fours. The route is a challenge and is mosly class 3, with some very short class 4 sections. 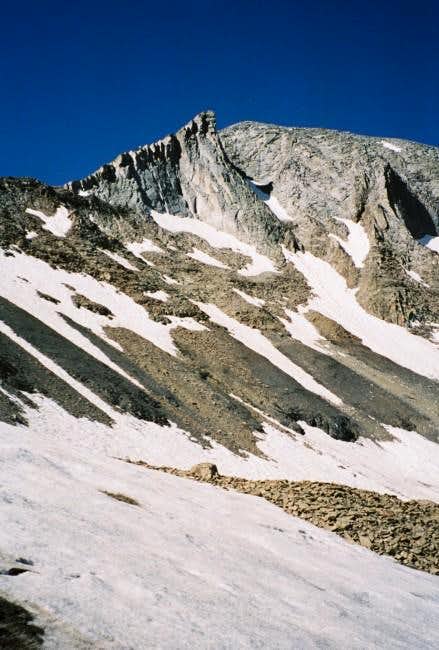 Northeast Ridge is to the left.

No permits are required. Be aware of the private property issues around the peak, especially on the west side.

Late June through early October. The roads will not be open before early June. Winter climbing is possible, but the distances are much longer since you must hike from the road closures.

In June, the Devils Chair will be easier to cross on the NW Ridge from the east route, but then again you must slog through the snow in the forest to get there. Pick your poison. 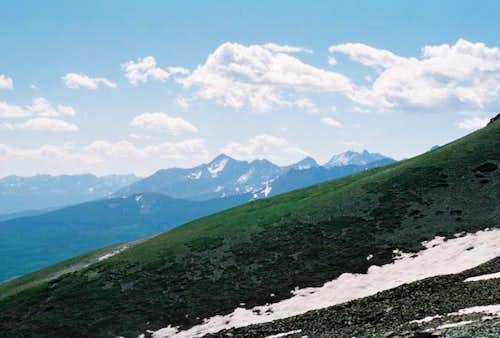 Wilson group from the slopes of Lone Cone on a sunny day.

There are campsites near both trailheads. Do not camp on the private property mentioned on the NW Ridge from the west route. 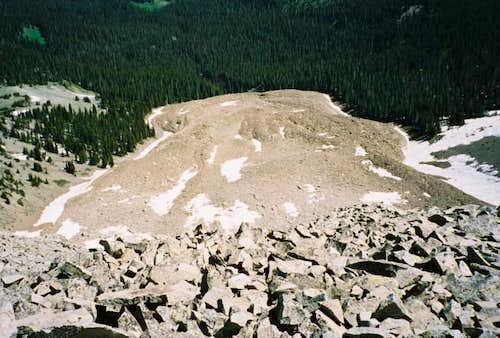