Mount Eva lies in the James Peak Wilderness area, about a mile south from Parry Peak. It connects to Parry by a ridge that is nearly flat on the west side and drops off on the east. Both of these peaks straddle the Grand / Clear Creek county line and the Continental Divide. The peak was named for Eva Parry, the wife of Dr. Charles Parry, who named several Front Range mountains after his friends and family. 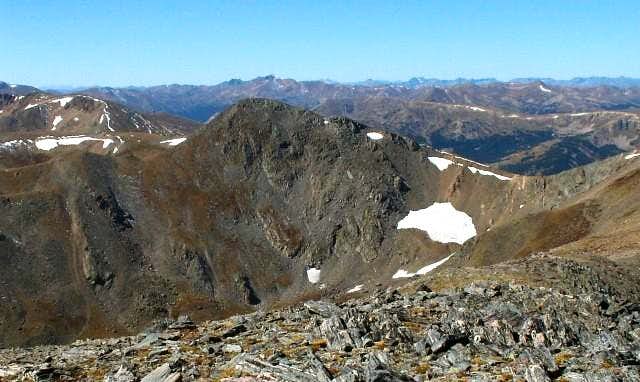 Before it became part of the wilderness area, Mount Eva served as a site for some telecommunications facilities, including a tall tower. You can still identify Mount Eva from U.S. Highway 40 by the square metal building near its summit. A sign on the side of the abandoned building warns of motion detection equipment, and 24-hour monitoring, and the possibility of a helicopter being dispatched to arrest intruders. You probably don’t have to worry about that today.

Mount Eva would seldom be climbed by itself these days, since there remains no commercial reasons to be on this mountain. Today on Mount Eva you will mostly find die-hard peak baggers and hikers doing the Continental Divide Trail.

Mount Eva is in the middle of a series of summits making the western boundary of the James Peak Wilderness. Not all these are officially named or ranked summits. Eva is officially named, and ranked, and it is the last of this particular group to be documented on SummitPost. In order from north to south, the documented summits are:

A diagram below illustrates the boundaries of the Wilderness area, its relationship to Indian Peaks Wilderness, and Mount Eva's location. Mount Eva was specifically mentioned in Rep. Mark Udall's 1999 federal legislation that proposed the James Peak Wilderness. The legislation, which passed in 2002, called for the removal of the abandoned radio tower and facilities on Mount Eva “as soon as practicable.” Apparently this was one of those unfunded government mandates, however, because the facilities remain there to this day. The tower has toppled and lies in ruins just 100 yards from the summit. The accompanying steel building still stands as a landmark, or rather an eyesore, visible for many miles around.

The mountains of the James Peak Wilderness can be approached from numerous directions. Finding a way in to the wilderness area is not a problem.

To reach Mount Eva from the southwest, you may start at the Berthoud Pass summit. From the southeast you may start at Bill Moore Lake, accessible by a 4WD road from Empire. From the east, start at the Fall River Reservoir, accessible by the Rainbow Road, which leaves Fall River Road south of Alice. St. Mary's Glacier Trailhead, to the northeast, gives access to climb James Peak, Bancroft, Parry, and Eva all in one day. Trailheads to the northwest of Mount Eva include Jim Creek and Rogers Pass, accessible via Forest Roads starting across from Winter Park ski area. These also would allow you to take in James Peak and Parry, before summiting Mount Eva.

No doubt you will be climbing other summits in combination with Mount Eva, so you will want to visit each of those peak pages for more ideas on approaches.

The Sulphur Ranger District administers the Grand County (west) side of Mount Eva. There are several campgrounds on this side, between Berthoud Pass and Winter Park in the Fraser River Valley.

Mount Eva makes a fine summer climb. Be aware of Colorado's propensity for sudden, violent thunderstorms especially in the months of July and August. Winter visitors must be prepared for full winter alpine conditions.

Current conditions are available on the Arapaho and Roosevelt National Forests web site. They include News alerts, fire information, current weather, campground status, road status, fire restrictions, and closures. If you plan on climbing in the winter or spring, please visit the Colorado Avalanche Information Center for education and forecasts. Before you leave home, it's a good idea to check the National Weather Service point forecast for nearby St. Mary's Glacier.

Dr. C. C. Parry's first wife was Sarah M. Dalzell. His second wife, who survived him, was Mrs. Emily Richmond Preston. His mother and his only daughter were both named Eliza. His second wife's daughter from her first marriage was named Harriet. None of his sisters or half-sisters was named Eva, and as far as I can determine none of his brothers ever married an Eva; so who was Eva?

Wow, you must be related to Dr. Parry! Thanks for your input. I found the information on Parry's wife and the naming of Mount Eva in this book: King of Colorado Botany: Charles Christopher Parry, 1823-1890 by Weber, William A. Publication: Niwot, Colo. University Press of Colorado, 1997.