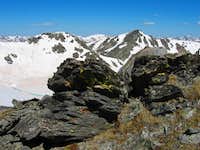 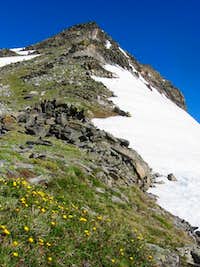 For a peak on the Continental Divide and within easy day-hiking distance in very popular Rocky Mountain National Park, Mount Ida is not terribly well-known. It is no secret, mind you, but it attracts nowhere near the crowds that other trail-accessible park peaks in the park such as Longs Peak and Flattop Mountain do. The reason is probably that few books have any information about hiking it, few topo maps even show the trail to it, and the trail to the summit is not marked at the tralhead parking area.

The mountain is situated near the mountainous heart of the park and overlooks a beautiful lake basin that sees almost no human visitation. There are spectacular views west to the Never Summer Mountains (what a great name for a mountain range), which seem almost close enough to leap to, and mighty Longs Peak looms to the east. Most of the hike is across rolling tundra slopes just beneath the Great Divide, and summer serves up a virtual wildflower museum.

Lovers of pristine mountain scenery will enjoy the hike up Ida and may end up considering it to be one of the best alpine hiking experiences Colorado has to offer.

Lightning Warning: Colorado is notorious for its afternoon summer thunderstorms, especially mid-July through early September during what is thought of as the monsoon season (much of which is fed by hot air rising in the Four Corners region). Because so much of the hike up Ida is across rolling tundra, it is a terrible place to be, one of the worst imaginable, during a thunderstorm. There is no shelter at all-- no large rock outcrops, nothing-- for the 3.2 miles between the summit and timberline. If you are caught out there, as i once was, you have really two options: run or duck. And pray either way. They say there are no atheists in foxholes, and I imagine there aren't too many among hikers and climbers who get caught in mountain thunderstorms, either. It is best to do this hike in the morning, and you should turn around immediately if conditions start to appear unfavorable.

I will cover three routes here, but the climber's log indicates that some make an approach from the cirques below Ida's northern face. This would be an arduous but spectacular journey.

This hiking route is about 4.5 miles in length, and most of it is along a good trail. Elevation gain is about 2200'. From Milner Pass, hike along a trail next to the small lake there. At the end of that lake, a sign will indicate the direction and distance to Mount Ida. The trail climbs steeply (about 1000') for almost 1.5 miles until reaching timberline and becoming much gentler after that. The trail ends near the summit area, and the rest of the way is an easy hike across rocks; there are plenty of rocks here, so one can easily avoid trampling the tundra. Some rocks are loose and can pose a danger to the ankles, but the going is always Class 2.

As the climber's log tells, some make a long traverse between Bear Lake and Milner Pass. From Bear Lake, Mount Ida is the last summit crossed on a long, spectacular traverse of the Continental Divide. This traverse will require a vehicle shuttle for one-way trips and a backcountry stay for those returning to their starting point on foot. Expect a long, tiring day, as the distance to cover is in the range of 20 miles.

Drive to Milner Pass, which is on the Continental Divide and on the western side of Trail Ridge Road. There is a large parking area, and there are primitive toilets, too.

An alternate starting point is from the Bear Lake Trailhead on the east side of the park.

A seven-day entrance fee costs $20 per passenger car; it is $10 for pedestrians and for people on bicycles, motorcycles, and mopeds. An annual pass is available for $35, and the America the Beautiful Pass, which covers entry to all federal recreation areas for a year, costs $80.

The entirety of Trail Ridge Road is usually open from late May to mid-October, making those the best months to climb Ida (though fall snow can complicate things). At other times of the year, skiiers and snowshoes can head past the road closure (shortly after Timber Creek Campground) and make a long approach to Milner Pass, or they can approach from Bear Lake via the Flattop Mountain Trail and the Continental Divide (a long traverse, but the road to Bear Lake is open all year). When attempting the mountain during the "snow seasons," be prepared to cross deep snowfields.

Timber Creek Campground, with over 90 sites and being about eight miles inside the park from the Grand Lake entrance, is the closest developed campground. It does not take reservations, and it is open all year.

Moraine Park and Glacier Basin Campgrounds are off Bear Lake Road. The former is open all year, but the latter is open from late May through early September. Both campgrounds take reservations, and reserving in summer is strongly recommended. Expect a drive of about an hour to reach Milner Pass.

Fees are $20/night during summer months.

More information about camping, including links for reservations.

Backcountry camping is also an option.

Please follow the Mount Ida page creator's advice about thunderstorms: This is an exposed ridge and would draw considerable fire in bad weather. However, I respectfully disagree with the statement that there is no cover to be had at all on the mountain: in certain sections of the hike, there is opportunity to bail to the west toward Jackstraw Mountain. The gulch between the Ida north slope and Jackstraw is choked with timber, which, if entered, would reduce your threat of being singled out by Zeus. In places along the trail, the slope is too severe to bail into this gulch, but there are points at which it is possible. It would not be a bad idea to keep an eye on these escape routes on your ascent, in case of terrific storms on the descent. Remember, however, the page creator's more-than-reasonable warning: If the weather looks sketchy, simply turn back. This is an alpine hike.