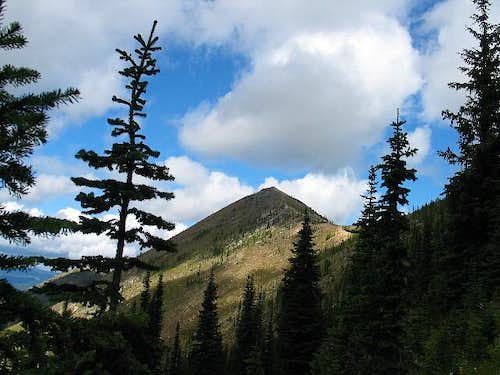 Rhodes Peak is located on the eastern side of Idaho, not far from the Montana border and it is a part of the Shoshone range which is a part of the Bitteroot Mountain Range.(thanks to Tom Lopez for that information which is found in his book which is a must have if you plan to do anything in Idaho) It is the highest point in Clearwater county and as such is sought after by those who seek after county highpoints and peaks with over 2000 feet of prominence. It comes in at #39 on the prominence list thanks to its almost 2700 feet of prominence.  Despite its relatively low elevation, it is still ranked as one of Idaho's Fifty Finest peaks. The closest city of any size is Missoula Montana.  Rhodes Peak is located in
beautiful country and is visited by fishermen and hunters as well as by hikers and climbers.

From Missoula, drive south US 93 / 12 until US 12 splits off towards Lolo Pass. From the Lolo Pass, it is 12 miles to the Powell Ranger Station where the Lochsa Campground is located nearby (watch for mile marker 162). Just prior to that turnoff to the ranger station, the Lochsa Lodge and campground, look for FS 569 on the north side. It is also marked as Parachute Hill road , It is just east of the turnoff to Powell CG and guard station. Follow FR 569, ignoring spurs on both sides, to Papoose Saddle (7.0 miles). Go straight ahead at the Four-way intersection, onto FR 500 westbound, also marked as the Lewis-Clark Speedway as part of the commemoration of the Bi-centinenial. This road is narrow and rough in places with few turnouts but in approximately 12 miles, at Cayuse Junction, turn right onto FR 581. Continue on FR 581 for another 7 1/4 miles to the saddle at 6,715 feet. The road has been suitable for 2WD vehicles to this point.and this is where'd you would park but if you have high clearance and 4WD, go right onto the road that heads up to Blacklead Mtn, the last mile or so up to Blacklead Mountain and park there. It took us one and a half hours to get to this point in a 4WD vehicle. (roughly 27 miles from US 12.

Dennis Poulin was able to drive north to Superior Montana after his visit so be sure and study your maps and determine which way in might work best for you.  Dennis commented (in 2010) "After the hike I drove north all the way to Superior in MT. It took 3 hours to drive out that way, but the roads were ok."

Of particular interest is the impact on the roadway aspect. Please take the time to study the PDF brochure which has information and a map.

No permits were required to park or to access the wilderness area. Check out this web site for more information on
the Clearwater National forest including phone numbers.

See information about permits needed for traveling portions of the Lewis & Clark trail located in the area of the access for this peak.


When To Climb and summit visitation

The best time to access this mountain would be after no snow remains to block the road. Probably middle of July until late October. It is a long effort to just get to the TH so road conditions would be very important.

This peak rarely gets visitors and mainly from county highpointers. As of 2015, the peakbagger summit list shows only 15 that have been there since 1988.

Camping is available at many campgrounds along US 12 but the Lochsa CG near the access road is a nicely developed one with plenty of camp sites and flush toilets. Camping in the general area of the TH (Blacklead Mtn) would seem ok.

The closest place that has a weather report is Missoula Montana which may or may not mirror conditions in the Rhodes Peak area. However, this Lolo Pass web cam can give you an idea of what you might be dealing with if you check it out during the daytime.

Since Rhodes Peak is the highest point in Clearwater County, it is reasonable to mention a few facts about the county itself. From Wikipedia, I quote:

"It was established in 1911. It was named after the Clearwater River. As of the 2000 Census the county had a population of 8,930. The county seat is Orofino.

USFS Powell campground is a mile or less from FS 569 that gets you to the trailhead. =)

Flush toilets as well as pit toilets. Very nice place, and only $8.00 a night!