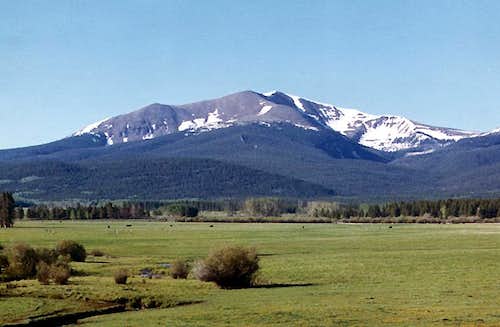 Parkview Mountain from the north.

Parkview Mountain is the highest and most massive peak in the east-west-trending Rabbit Ears Range, which separates North and Middle Parks. It is located on the Continental Divide in Grand and Jackson Counties, Colorado, approximately 20 miles northwest of Granby and 30 miles south of Walden.

Once the snow is gone, Parkview Mountain can easily be ascended from any direction without climbing anything more difficult than second or rarely, third class. One may be able to seek out some fourth class scrambling on the cirque wall above the headwaters of Willow Creek on the north side of the peak. Some moderately steep snow can be climbed in the winter and spring. Views from the summit are very rewarding in all directions, and the local geology is varied and interesting. 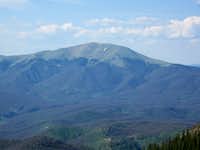 Access to the mountain begins near Willow Creek Pass on Colorado Route 125 between Walden and Granby. One can start hiking from the pass, or drive in part way on primitive roads accessing the northeastern cirque and the southeast slopes. Parkview Mountain is on the USGS Parkview Mountain and Radial Mountain 7.5 minute Quads.

Parkview Mountain can be easily climbed from any direction. All of the ridges are easy class 2 hikes. The cirque walls are steeper and contain much loose rock. Climbs of the cirque walls are probably only of interest to those wanting to study the geology or to climb some moderately steep snow early in the season. The most obvious routes from the Willow Creek Pass area are the East and Northeast Ridges. Both are easily accessed from the road up Pass Creek. Hike from the pass, or drive as far as your vehicle will allow.

Detailed descriptions of the approaches and climbs of the East (this website calls what I consider to be the East Ridge - the Southeast Ridge - there is a true Southeast ridge on the southeast part of the mountain) and Northeast Ridges are provided at climbmountains.com Parkview Mountain.

Member Scott Patterson reports that there is now a marked backcountry ski trail (marked with poles for winter use) that ascends the summer Mulestay Jeep Road and southeast ridge to the summit. It is part of the new Grand County winter trail system and is on the new GC trail system sketch map handed out by the Forest Service office in Kremmling. As of 2009, Scott reports: "Unfortuantely, with some exceptions (such as the NE ridge) most the trees are now dead around Parkview Mountain due the pine beetle epidemic. Only the highest ones have survived." 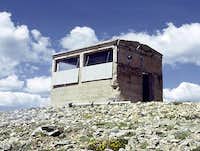 There is a historic fire lookout on the summit of Parkview Mountain. Page with a 2007 photo showing restoration It was built in 1916 and used until 1948. It fell into disrepair, but has recently been restored to usable condition. I spent four or five nights there in 1972 - it IS frightening during a lightning storm!

As in most Colorado mountains - expect afternoon thunderstorms. 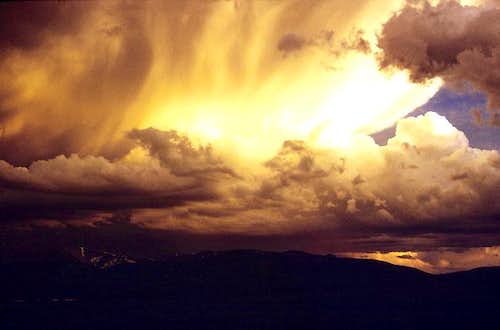 The Parkview Mountain Stock is one of several Oligocene - Miocene volcanic centers along the Rabbit Ears Range. Other centers in the range include Little Haystack Mountain, the Poison Ridge Intrusive Center and Haystack Mountain. The extrusive rocks from these centers form a series of flows called the Rabbit Ears Volcanics. The present occurrence of the Rabbit Ears Volcanics is confined to the western portions of the Rabbit Ears Range and none are found in the immediate vicinity of Parkview Mountain. The sedimentary rocks intruded by these centers are the 6,000 to 10,000 foot thick Middle Park Formation consisting of arkosic sandstones, mudstones, siltstones, and volcanic-rock pebble conglomerates. Some of these sediments are exposed in cirque walls on Parkview Mountain. The best exposure is in the cirque at the head of Willow Creek. The Parkview Mountain Stock is composed of quartz latite porphyry and intrudes the Middle Park Formation of Late Cretaceous and Early Tertiary age. Two systems of quartz latite porphyry dikes of pre-stock and post-stock ages are also present in the area. The post-stock dikes show a roughly radial pattern about the stock. A quartz monzonite intrusive not exposed in outcrop, but intersected by a drill hole, is present at depth in the area. Relatively minor copper, lead, zinc, and silver mineralization occurs in brecciated and silicified contact zones and in veins in the area, but not in sufficient amounts to be of current economic interest. There are several old underground mines in the northeast cirque. In the late 1960s and 1970s, the area was of interest because of moderate to intense alteration and mineralization associated with the stock, which suggests the possibility of a disseminated molybdenite (Urad-Henderson type) mineral deposit. Detailed geologic mapping, geochemical sampling, geophysical surveys, and core drilling have not discovered economic concentrations of minerals associated with the Parkview Mountain Stock.