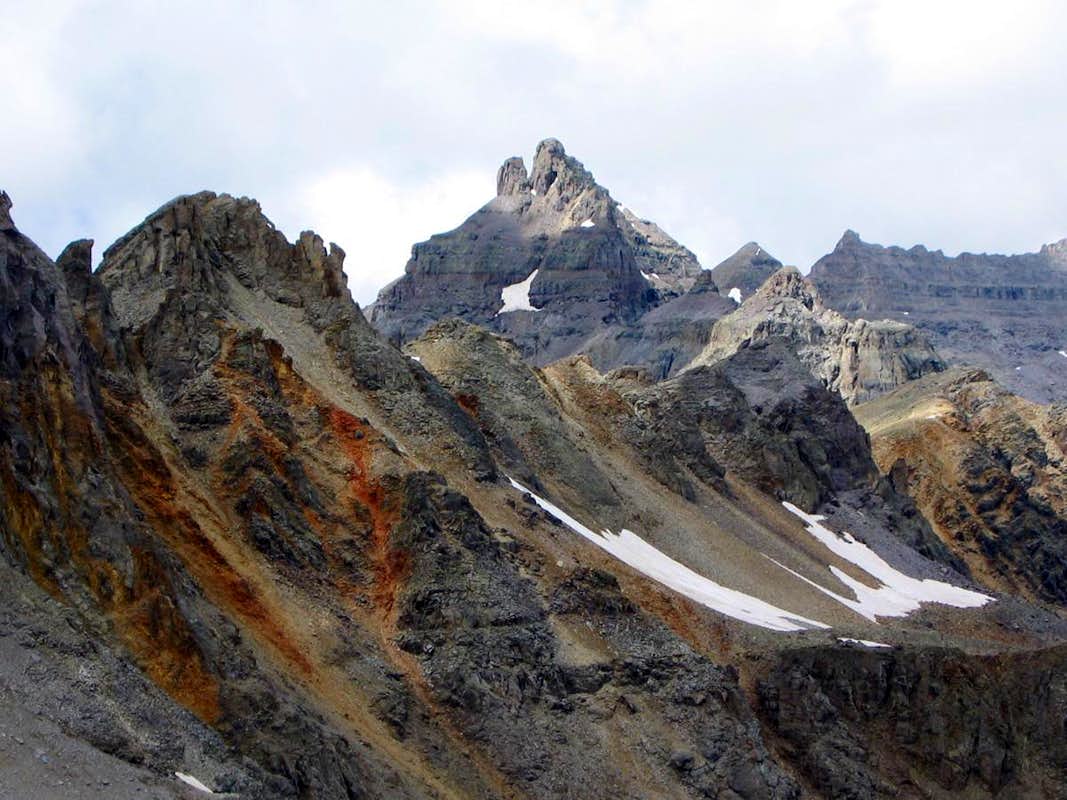 Dallas Peak is located in the San Juan Range 2 miles southwest of Mount Sneffels and 3.4 miles north of Telluride, Colorado.  Dallas is the third highest peak in the Sneffels Range, behind Mount Sneffels and Teakettle Mountain.  Dallas Peak weighs in as the 100th highest peak in the centennial state, Colorado, so those wishing to climb the 100 highest peaks in the state must the climb the 180' summit tower atop Dallas Peak.  The easiest route up the summit tower requires 5.3 rock climbing up its north face.  Because of this summit tower, Dallas Peak is considered the most difficult ranked peak above 13,113 feet in Colorado to climb.  In addition to surmounting the technical summit tower, reaching the base of Dallas Peak's summit tower requires difficult route finding and loads of Class 2+ scampering.

The first five ascents are listed in the table below. Spencer Swanger’s ascent in 1976 made him the first person to climb the 100 highest peaks in Colorado (1,2). Art Porter and R.J. Campbell were the first to approach from the south (3).  Now the southern approach via the Mill Creek Trailhead is considered the standard route.  Most parties attempt Dallas Peak mid summer through fall after the annual snowpack has melted off.  If taking the standard route, expect about 8-9 miles & 5000 feet of elevation gain for the roundtrip approach. 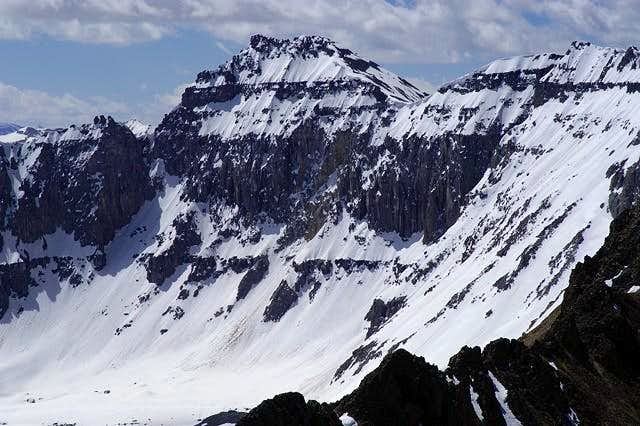 This is the standard and easiest route on Dallas Peak.  Many people day trip this route, but others choose to camp around 11,200'.  Since the crux of this route is on the north face of the summit tower, most parties wait until mid summer before attempting this route in order to allow the annual snowpack to melt off.  Start at the Mill Creek Trailhead (see Getting There below) & hike 0.4 miles on the Deep Creek Trail to a signed trail intersection.  Continue left (west) another 1.5 miles along the Deep Creek Trail to another signed trail junction.  Continue right (north) on the Sneffels Highline Trail for another 1.9 miles until you are just slightly east of due south of the summit.  Leave the trail and hike 0.3 miles north toward the gully below Dallas' upper south face (Class 2).  Ascend the right side of the gully to a 30 foot cliff bad (Class 2+).  Climb through the cliff band on solid rock (Class 3).  Then climb above the cliff band and find a climber's trail.  Head northeast, climb another cliff band and continue northeast to a small 13,000 foot ridge (Class 2+).  Follow the climber's trail northeast to another small ridge at 13,200' (Class 2).  Ascend north, leaving Dallas' south face (Class 2+).  Cross a gully on Dallas' east face, continue north an additional 100 feet, then ascend west to a cliff band and traverse south 100 feet (Class 2+).  Climb west 40 feet up the south end of the cliff (Class 4), then ascend 200 feet west up to the base of the summit tower (Class 2+).  Climb north across a gully with a large chockstone and look for another, smaller gully 20 feet north.  Ascend this gully 120 feet west (Class 4).  Scamper 100 feet SW to the top of the larger gully.  Traverse 20 feet west (Class 3) and reach the top of a ramp.  Descend 60 feet west down the ramp into the north face.  The summit pitch is directly above you and is easy to miss if you continue down the ramp too far.  This is where most parties rope up.  Ascend the crack for 10 feet, step right and climb another 10 feet to easier terrain (Class 5.3).  Continue to the summit (Class 5.2).
To descend, rappel 85 feet down the vertical northeast corner of the summit tower from webbing slung around a large block on the northeast side of the summit.  To finish the rappel, go through a hole, ending the rappel below the large chockstone in the large gully you bypassed on the ascent.  You will need a 60 meter rope for the rappel. 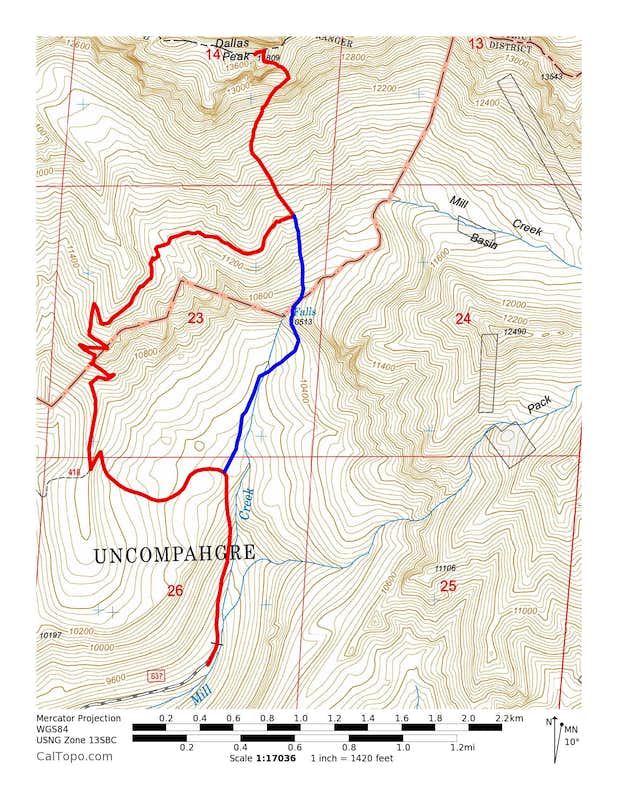 This route directly up the south face of Dallas Peak is rarely climbed.

Late Spring-Early Summer
Drive 4.8 miles west of Ridgway, Colorado on Highway 62 to Dallas Creek Road. Drive 8.5 miles on Dallas Creek Road to the Blue Lakes Trailhead at 9,320 feet. Follow the Blue Lake Trail 3 miles to the west side of lower Blue Lake at 11,000 feet. Climb south-southeast up a wide gully that gains the 12,974 foot saddle on Dallas Peak’s east ridge. Climb the ridge to the base of Dallas Peak’s summit tower. This route is recommended when the gully is holding snow (2,8) 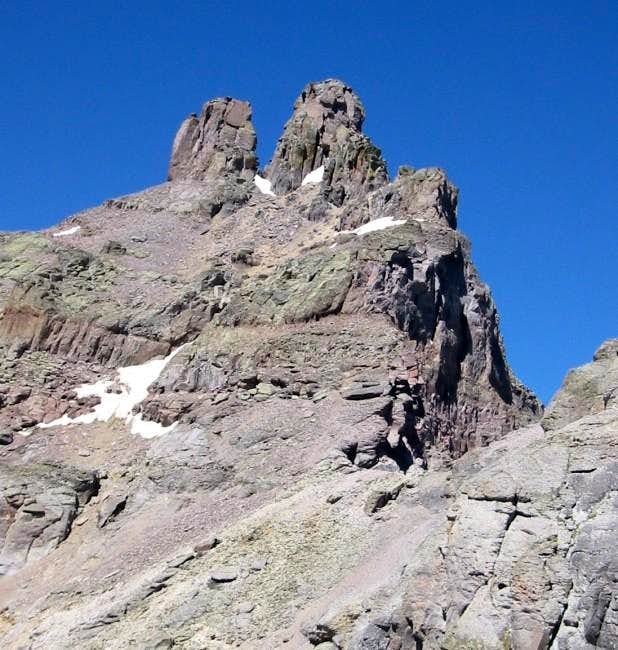 Dallas Peak is located in the Mount Sneffels Wilderness; mechanized travel is forbidden.

Camp at the Mill Creek Trailhead, between 11,200 and 11,400 feet on the Sneffels Highline Trail or at lower Blue Lake.